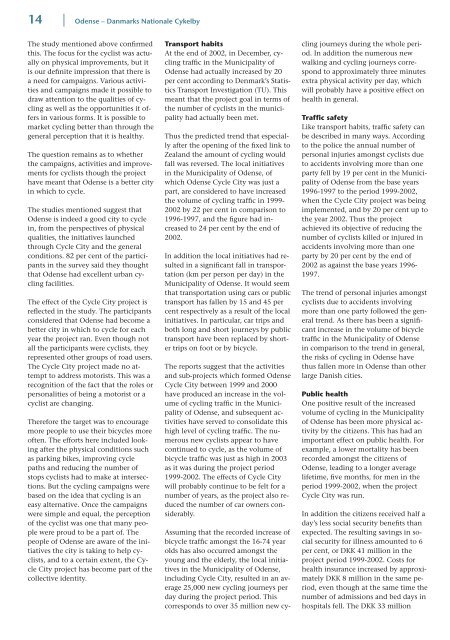 The study mentioned above confi rmed

this. The focus for the cyclist was actually

on physical improvements, but it

is our defi nite impression that there is

a need for campaigns. Various activities

and campaigns made it possible to

draw attention to the qualities of cycling

as well as the opportunities it offers

in various forms. It is possible to

market cycling better than through the

general perception that it is healthy.

The question remains as to whether

the campaigns, activities and improvements

for cyclists though the project

have meant that Odense is a better city

in which to cycle.

The studies mentioned suggest that

Odense is indeed a good city to cycle

in, from the perspectives of physical

through Cycle City and the general

conditions. 82 per cent of the participants

in the survey said they thought

that Odense had excellent urban cycling

The effect of the Cycle City project is

refl ected in the study. The participants

considered that Odense had become a

better city in which to cycle for each

year the project ran. Even though not

all the participants were cyclists, they

represented other groups of road users.

The Cycle City project made no attempt

to address motorists. This was a

recognition of the fact that the roles or

personalities of being a motorist or a

Therefore the target was to encourage

more people to use their bicycles more

after the physical conditions such

paths and reducing the number of

stops cyclists had to make at intersections.

But the cycling campaigns were

based on the idea that cycling is an

easy alternative. Once the campaigns

were simple and equal, the perception

of the cyclist was one that many people

were proud to be a part of. The

people of Odense are aware of the initiatives

the city is taking to help cyclists,

and to a certain extent, the Cycle

City project has become part of the

traffi c in the Municipality of

Odense had actually increased by 20

per cent according to Denmark’s Statistics

the number of cyclists in the municipality

had actually been met.

Thus the predicted trend that especially

after the opening of the fi xed link to

Zealand the amount of cycling would

fall was reversed. The local initiatives

in the Municipality of Odense, of

which Odense Cycle City was just a

part, are considered to have increased

In addition the local initiatives had resulted

in a signifi cant fall in transportation

(km per person per day) in the

Municipality of Odense. It would seem

that transportation using cars or public

transport has fallen by 15 and 45 per

cent respectively as a result of the local

initiatives. In particular, car trips and

both long and short journeys by public

transport have been replaced by shorter

trips on foot or by bicycle.

The reports suggest that the activities

and sub-projects which formed Odense

have produced an increase in the volume

of cycling traffi c in the Municipality

of Odense, and subsequent activities

have served to consolidate this

new cyclists appear to have

continued to cycle, as the volume of

bicycle traffi c was just as high in 2003

as it was during the project period

will probably continue to be felt for a

number of years, as the project also reduced

the number of car owners considerably.

Assuming that the recorded increase of

bicycle traffi c amongst the 16-74 year

olds has also occurred amongst the

young and the elderly, the local initiatives

in the Municipality of Odense,

including Cycle City, resulted in an average

day during the project period. This

corresponds to over 35 million new cy-

cling journeys during the whole period.

In addition the numerous new

extra physical activity per day, which

will probably have a positive effect on

be described in many ways. According

to the police the annual number of

personal injuries amongst cyclists due

to accidents involving more than one

party fell by 19 per cent in the Municipality

of Odense from the base years

when the Cycle City project was being

implemented, and by 20 per cent up to

achieved its objective of reducing the

number of cyclists killed or injured in

accidents involving more than one

party by 20 per cent by the end of

The trend of personal injuries amongst

cyclists due to accidents involving

more than one party followed the general

trend. As there has been a signifi -

cant increase in the volume of bicycle

traffi c in the Municipality of Odense

in comparison to the trend in general,

the risks of cycling in Odense have

thus fallen more in Odense than other

One positive result of the increased

volume of cycling in the Municipality

of Odense has been more physical activity

by the citizens. This has had an

important effect on public health. For

example, a lower mortality has been

recorded amongst the citizens of

Odense, leading to a longer average

lifetime, fi ve months, for men in the

In addition the citizens received half a

expected. The resulting savings in social

security for illness amounted to 6

per cent, or DKK 41 million in the

DKK 8 million in the same period,

even though at the same time the

number of admissions and bed days in

Throughout the campaigns for adults, there was a great number of offers to try out new types of bicycle, trailers, company bikes etc., and the various types of accessories were reviewed. These cycling campaigns continuously encouraged people to use bicycles, and prizes were used as a reward, for individuals, workplaces and employers. Fold-up bikes were successfully introduced as an effi cient complement for car commuters. It was attempted to promote traffi c safety through a special campaign about cyclists’ behaviour, and a selected area with a speed limit of 30 km/h was introduced. In addition it was attempted to support cycling as a lifestyle through several image improvement initiatives, including highlighting the special role of bicycles in police work and as taxis. The Cycle City project was powerfully presented, for example, through 80 talks and 856 newspaper articles. Each of the sub-projects had its own mission, and, to put it bluntly, suddenly we had a lot of pieces for a large jigsaw puzzle. Not everything was put into place, but the very diversity ensured that a lot of different target groups were aware of <strong>Odense</strong> Cycle City. A large proportion of the citizens were affected, sometimes more than once, by the project. The people of <strong>Odense</strong> are aware of the initiatives the city is taking to help cyclists, and to a certain extent, the Cycle City project has become part of the collective identity. Panel survey This was shown by a panel research study conducted by the University of Southern Denmark, where one of the aims was to record the evaluation of the Cycle City project and its areas of initiative. The participants were representative of a wide cross-section of the population of the city between the ages of 15 and 60. Of those asked, over half were familiar with the associated initiatives. The things which best remained in the consciousness were projects aimed at physical improvements, such as: • Short cuts • Green waves (fl ow scheme) • Safe bicycle parking The campaigns which took the form of an annual ”Cycling day” on the central Town Hall Square (Flakhaven) or the election of “The Cyclist of the Year” in <strong>Odense</strong> were hard for those involved in the survey to recall. This seemed to be related to the fact that the participants in the study could not remember who was behind these initiatives. Summary I 13 One reason is that the weight placed upon the activities intended to promote cycling by the Cycle City project was different to that accorded by the cyclists themselves. <strong>Odense</strong> Cycle City continually asked the cyclists of the town what priority they would put upon future areas of initiative to promote cycling. The greatest interest was shown for: • Crossing traffi c lights • The operational quality of the bicycle paths • The conditions for parking bicycles 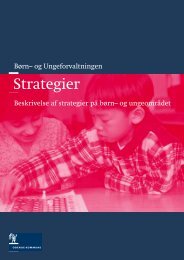 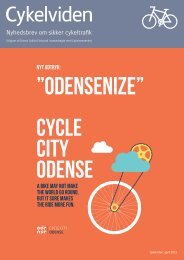 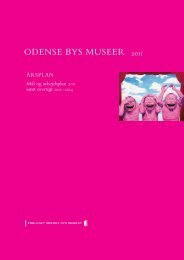 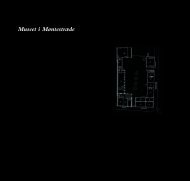 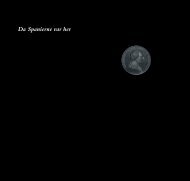 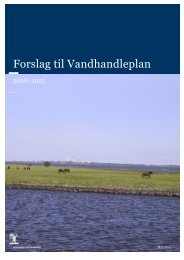 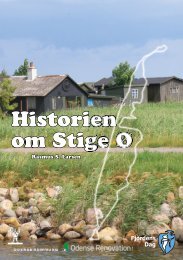 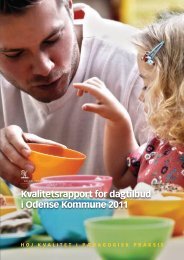 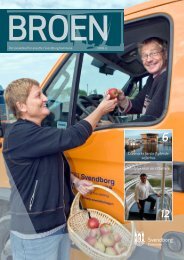