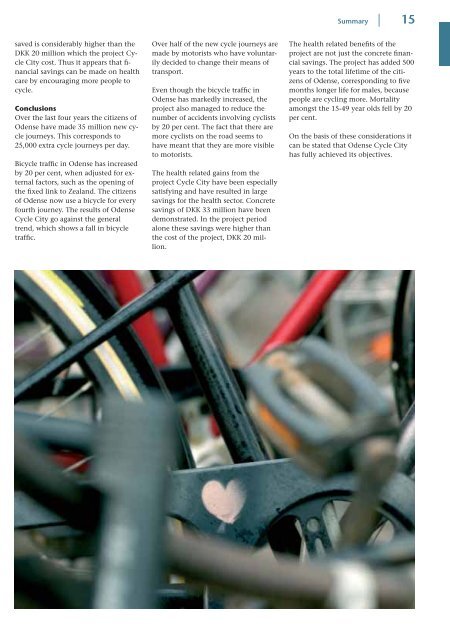 saved is considerably higher than the

DKK 20 million which the project Cycle

nancial savings can be made on health

care by encouraging more people to

Over the last four years the citizens of

Odense have made 35 million new cycle

journeys. This corresponds to

by 20 per cent, when adjusted for external

factors, such as the opening of

the fi xed link to Zealand. The citizens

of Odense now use a bicycle for every

fourth journey. The results of Odense

Cycle City go against the general

trend, which shows a fall in bicycle

Over half of the new cycle journeys are

made by motorists who have voluntarily

decided to change their means of

Even though the bicycle traffi c in

Odense has markedly increased, the

project also managed to reduce the

by 20 per cent. The fact that there are

more cyclists on the road seems to

have meant that they are more visible

The health related gains from the

project Cycle City have been especially

satisfying and have resulted in large

savings for the health sector. Concrete

savings of DKK 33 million have been

demonstrated. In the project period

alone these savings were higher than

the cost of the project, DKK 20 million.

The health related benefi ts of the

project are not just the concrete fi nancial

savings. The project has added 500

years to the total lifetime of the citizens

of Odense, corresponding to fi ve

months longer life for males, because

On the basis of these considerations it

can be stated that Odense Cycle City

has fully achieved its objectives.