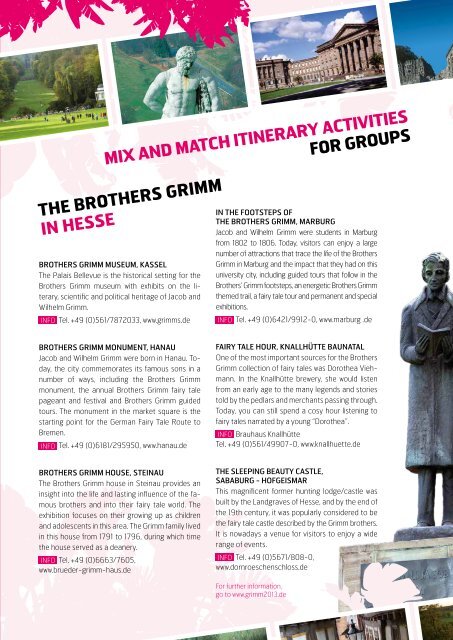 The Palais Bellevue is the historical setting for the

Brothers Grimm museum with exhibits on the literary,

scientific and political heritage of Jacob and

Jacob and Wilhelm Grimm were born in Hanau. Today,

the city commemorates its famous sons in a

number of ways, including the Brothers Grimm

tours. The monument in the market square is the

starting point for the German Fairy Tale Route to

The Brothers Grimm house in Steinau provides an

insight into the life and lasting influence of the famous

brothers and into their fairy tale world. The

exhibition focuses on their growing up as children

and adolescents in this area. The Grimm family lived

the house served as a deanery.

IN THE FOOTSTEPS OF

Jacob and Wilhelm Grimm were students in Marburg

number of attractions that trace the life of the Brothers

Grimm in Marburg and the impact that they had on this

university city, including guided tours that follow in the

themed trail, a fairy tale tour and permanent and special

One of the most important sources for the Brothers

In the Knallhütte brewery, she would listen

from an early age to the many legends and stories

told by the pedlars and merchants passing through.

Today, you can still spend a cosy hour listening to

This magnificent former hunting lodge/castle was

built by the Landgraves of Hesse, and by the end of

the 19th century, it was popularly considered to be

the fairy tale castle described by the Grimm brothers.

It is nowadays a venue for visitors to enjoy a wide

diSCoVEr tHE JoYS oF KASSEL CITY WALKING TOUR OF KASSEL – ART – CULTURE There are reminders around every corner of this walking tour that confirm Kassel‘s past - and present - as a city of art and culture. Visitors can follow in the footsteps of the Brothers <strong>Grimm</strong>, admire the impressive historical buildings and discover the many outdoor documenta works of art that have now become a permanent feature of the city. INFO Duration: 2 hours. Tel. +49 (0)561/7077-07 WILHELMSHÖHE HILLSIDE PARK This Baroque hillside park is one of the most magnificent landscape gardens in Europe. Stretching between the Wilhelmshöhe Palace and the statue of Hercules, this park is a wonderful place for a stroll, or to spend time admiring the ever-changing wonders of nature. The principal attraction in the park is an octagonal building that stands almost 30 metres high and which is crowned with a statue of Hercules. It has now become the Kassel city landmark. HIGHLIGHT Don’t miss the water features being turned on - a surging mass of water that cascades from the Hercules statue down to the large fountain by the palace. (1 May to 3 October, every Wednesday and on Sundays and bank holidays, from 2.30 pm to 3.45 pm.) Illuminated water features and entertainment, every first Saturday in June, July, August and <strong>September</strong>. Water feature tour. INFO Duration: 2 hours. Tel. +49 (0)561/7077-07 CITY TOUR - DISCOVER KASSEL This interesting tour of the city takes in a large number of interesting sights as well as Kassel‘s magnificent parks. During the Brothers <strong>Grimm</strong> celebratory year, the city tour will also give visitors a glimpse into the life and influence of the famous brothers. INFO Duration: 2 hours. Tel. +49 (0)561/7077-07 WILHELMSHÖHE PALACE MUSEUM, OLD MASTERS ART GALLERY AND ANTIQUE COLLECTION Located in the Wilhelmshöhe Palace hillside park, this museum contains an excellent collection of 16th and 17th century art, with a strong focus on Dutch and Flemish works. EXHIBITION HIGHLIGHT „Jordaens and the Antique“ (1 March – 16 June <strong>2013</strong>) Museum Fridericianum INFO Tel. +49 (0)561/316800, www.museum-kassel.de KASSEL STATE THEATRE The city of Kassel boasts one of the richest theatre histories in Germany. The Ottoneum was built under Maurice, Landgrave of Hesse, between 1603 and 1605 and was Germany‘s first theatre building. It‘s always worth checking out what‘s on! INFO Friedrichsplatz 15, Tel. +49 (0)561⁄1094-0, www.staatstheater-kassel.de CONTACT Kassel Marketing GmbH Tourist information office in the city centre and in Wilhelmshöhe train station. Tel. +49 (0)561⁄7077-07 Fax +49 (0)561⁄7077-169 www.kassel-marketing.de 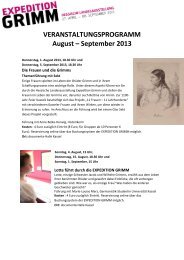 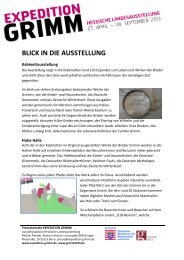 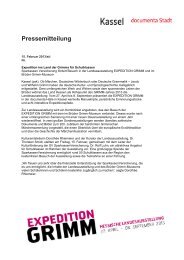 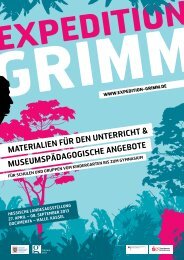 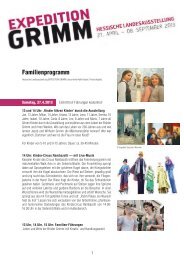 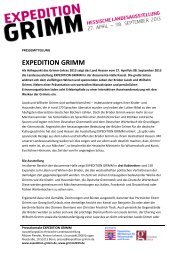 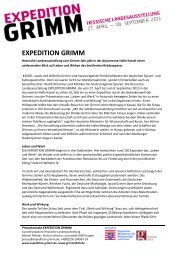 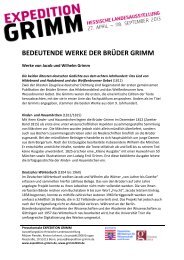 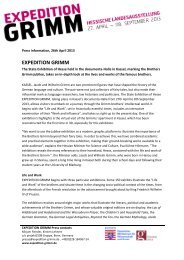 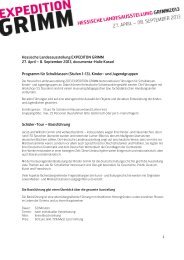 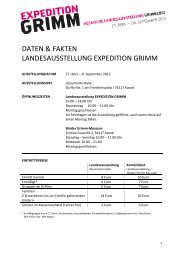 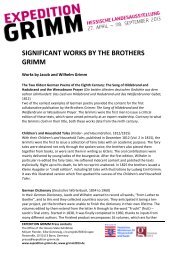 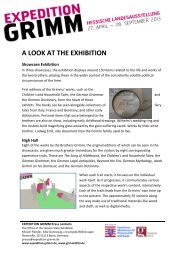 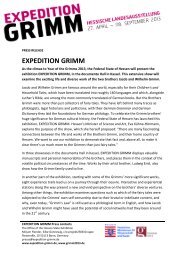 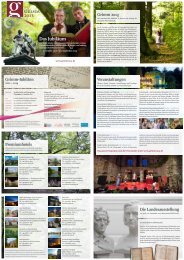 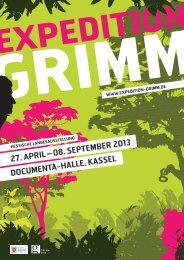