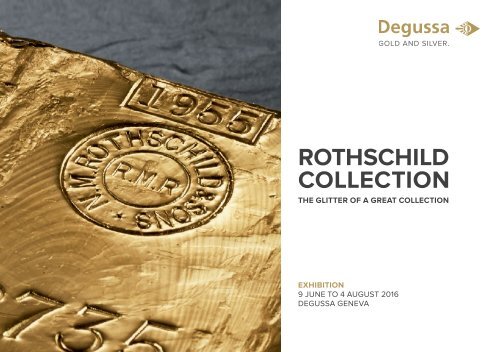 THE GLITTER OF A GREAT COLLECTION

Gold is as ancient as the Book of Genesis which mentioned

the land of Havilah which was abundant with the precious

metal. Similarly, in ancient India the Vedas texts stated that

the incarnation of the Creator himself, Brahma, was born

out of a golden egg. It was, almost certainly, the first metal

known to human beings, who were most likely attracted by

it glistening among the gravel in old river beds.

5’000 years ago, Egyptian hieroglyphics made frequent

reference to it. It was first worked into sacred ornaments

and jewellery being associated with the almighty Sun, and

thus was used for the crowns of its kings. Nothing shone

brighter. However, the turning point was when it became

legal tender as early as 6th century B. C. during the reign

of Croesus, King of Lydia.

Control of the gold mines became a matter of great importance

for early leaders bringing with it both wealth and

power. Since then it has captured the imagination of adventurers

with extraordinary legends about treasures as

famous as the Golden Fleece, King Solomons Mines or

even El Dorado. Alchemists throughout history have sought

to emulate King Midas in transmuting base metals into gold

– without success – while achieving breakthroughs in

chemistry, such as liquid distillation and melting techniques.

Within financial markets, the gold standard became the

norm in the 19th century to limit the amount of

money banks could issue and thus to prevent inflation. In

established the London Gold Fixing Market, which set the

benchmark price for gold which endures to this day.

Bretton Woods established the link between gold the

against inflation while remaining as alluring today as it did

in the times of the Egyptians, Sumerians and Greeks;

its chemical properties include it being ductile, conductive,

hard to forge and even has significant antioxidant

properties that protect it against the passage of time. In

THE GLITTER OF A GREAT COLLECTION

Their surname is a by-word for wealth. The Rothschild

banking dynasty were of German ancestry and were

behind many of the most important financial events of the

19th century: the construction of the rail transport

network in France, the digging of the Suez Canal, the

operation of the Spanish mines in Río Tinto to name a few.

They even funded the independence of Brazil and the

founding of Rhodesia (modern-day Zimbabwe). Their

focus stretched all the way to Australia, thanks to its large

significance back in 1993. It managed to amass more than

one thousand items, which were recently obtained by

gold manufacturers from 35 different countries. It has a

prices has a value of around CHF 10 million. The Rothschild

collection is part of the Degussa collection that includes

more than 1’200 unique pieces. The oldest item is dated

In addition to the Collection, Degussa has also acquired

other important artifacts including a variety of bars and

gold pieces from the Bronze Age, the Roman Empire and

the Late Middle Ages. There are also fascinating treasures

to be seen which were recovered from shipwrecks such as

sunk by a hurricane off the coast of Florida in 1622.

What makes it special is both its diversity while providing a

comprehensive example of the art of manufacturing gold

bars from around the world. Degussa is pleased to be able

to exhibit these items and share their profound interest in

precious metals. The story of gold is a narrative that goes

back to the dawn of civilization.

Doughnut bars were manufactured in Thailand since the

early 1970s, although today they are also manufactured in

Hong Kong. The doughnut is a traditional Chinese shape

for coinage. The hole enables many bars to be securely

stacked together on wooden rods or bound together with

string. Popular weights are the 1 tael (Hong Kong) and

The Rothschild Collection has four doughnut bars from

to be manufactured in Thailand by Yoo Long Kim Kee who

was the first known refiner to manufacture cast gold bars

to a precise weight by injecting gold under pressure into

Yin-Yang gold bars where produced by the Japanese

The pair of innovative kidney-shaped bars depicts the Yen

The baht is a Thai unit of weight. One baht is equivalent

in Thailand in many different shapes. These traditional

shapes resemble those in Hong Kong due to many Thai

bar manufacturers having a Chinese ancestry. The official

stamps on baht bars are among the most decorative in

dragons, Thai headdresses and the phoenix.

Honeycomb bars are manufactured by blowing

air onto the surface of the molten gold as it

to confirm that the bar is made entirely from

In Thailand, bars with manufacturer’s marks

in bas-relief are still issued.

The marks, carved into the base of the bar

mould, are formed when molten gold is poured

into the mould. This traditional method

of marking cast bars eliminates the need for

use throughout Southeast Asia. The most popular cast

For more than 50 years, the Indian gold market relied

heavily on the import of these small bars (alongside the

recycling of old gold) for the fabrication of jewellery. Most

were manufactured in Switzerland, UK, South Africa and

Australia, and until the late 1990s, most were imported into

Dubai and Singapore prior to their re-export to India.

end, when the Indian government applied an import tax on

tola bars that was higher than on gram-denominated bars.

The 1 kg bar, which is often cut into small tradable pieces,

is now the main bar imported into India.

with the names of the banks trading them. Indian financial

firms are currently the main clients of this type of product.

rolled to a uniform thickness. The cutting is usually done with

a die to create blanks that have the required dimensions and

weight. All the surfaces are smooth and even. Markings are

normally applied by a minting press. Although most minted

bars are rectangular, they are also manufactured round,

square, oval, etc ; sometimes even with a hole so they can

A tael is a Chinese unit of weight. In Hong Kong, one tael

is normaly 99 %. Gold bars, denominated in taels, were

where there were Chinese communities, especially within

In recent times, the bars have been traded mainly within

Hong Kong and Taiwan. Cast tael bars have been

in Hong Kong by refiners or issuers

accredited to The Chinese Gold & Silver

They are still traded in significant

and China. The traditional

“boat” shape has been

used for silver and other

Chinese coinage since as

far back as the Han dynasty

They are popular among fabricators and large investors

because they normally trade at a low premium above

While almost all kilo bars now have a fat ‘international’

shape, ‘traditional’ kilo bars in the shape of a brick, were

still being manufactured by some refiners in the 1990s

Today Degussa bars are certified by the London Bullion

Association LBMA and can by held in the Bank depot

Designs of model bars range from animals, trees and

towers to national symbols and even celebrities.

In 1991 LG Metals South Korea issued a traditional range of

gold “model bars” in the form of pigs (a symbol of wealth),

normally traded at a relatively low premium above the

value of their gold content. They are popular as gifts of

“money” at weddings and anniversaries.

a range of innovative gold bars

in an unconventional “bone”

were widely manufactured in Vietnam. The standard bar

weight is approximately 15 g, although they were also

sold in lengths of 2 1/2 bars that weigh approximately

easily placed inside shoes, sewn into the lining of clothes

or rolled into narrow tubes. Thousands of these bars,

smuggled by Vietnamese refugees were sold to gold

dealers around the world in the 1970s.

4 decorative “Fine Art” bars. The bars were issued at a

“Koban”gold bars since the early 1960s, ranging from

5 g to 50 g. The bars commemorate the oval shape of

Degussa produced a number of these bars during the

cities and special events like the Olympic Games were

popular. Today, these gold bars are collectors’ items which

often achieve a high premium over the spot price.

Tonnes of pendant bars are sold each year, mainly in the

Middle East. In 1978, Degussa was the first accredited

as a pendant. Today, Degussa is expanding its wide range

Since 2012 Degussa is been producing them once again

with similar depictions primarily on 1 oz Silver bars with

Fine gold cards were introduced by Mitsubishi (Japan) in

designs which could be applied to the smooth gold surfaces.

Although fine gold cards up to 1000 g have been made,

the 1 g card remains the most popular. While the main

market is Japan, tailor-made cards have also been

produced for other countries.

DEGUSSA AT A GLANCE

In 2010 we founded our company and

named it „Degussa“. A name, with historical

Our business is deeply committed

and embedded in the precious metals

world and we remain close to the traditions

of the earlier times. As such,

Degussa has a wide range of precious

metals in the form of bars and coins.

You will find our products at our

branch in Zurich and Geneva.

Abroad we also have branches throughout

Germany, in London, Singapore and

We offer a comprehensive range of

your needs. Degussa bars feature the

logo with the iconic Degussa logo

are ancient alchemical symbols for

We also offer a special service to

you at our Zurich and Geneva office,

where we have available safe deposit

boxes for you to store your precious

metals after a purchase. This gives

you the opportunity to store your assets

safely and discretely outside the

banking sector. Of course, you are

and other valuables in your safe 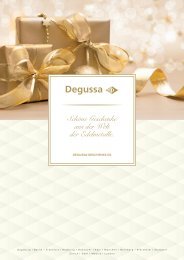 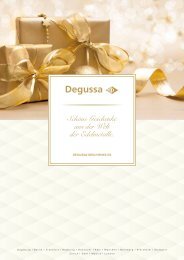 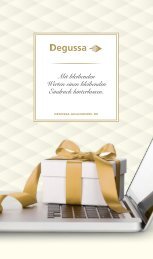 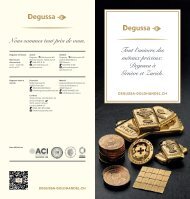 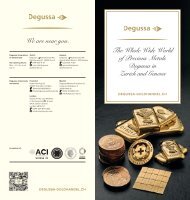 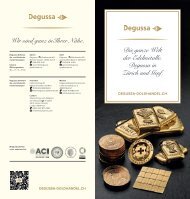 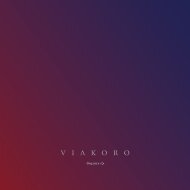 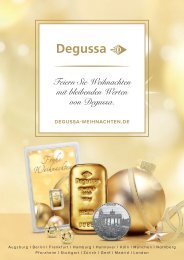 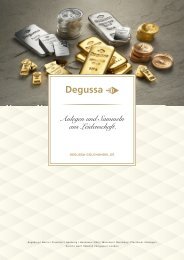 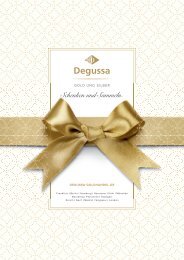 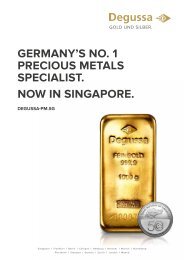 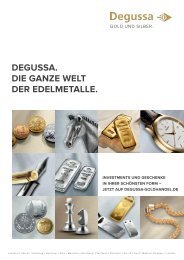