A Study Trip to the Nilgiris

Coimbatore Zoological Park Society and not to be referred or quoted for any other purpose.

still inhabit some hills and jungles. In the Nilgiri hills of northwest Taml Nadu live

the Toda, and other smaller tribal groups survive in the dense rainforest of the

Western Ghats. Toda's are most interesting and least numerous, tribal people of

Thought to be descendants of early wave of Dravidian People, they live in small,

forests of the Nilgiris. Until recently they supported themselves on dairy

products from their herds of buffalo. Now they have turned to agriculture. Their

hamlets to provide their buffalo with new pasture. Old customs are weakening

and only two of these summer settlements are still used.

A striking people, the women dress their hair in long ringlets on either side of

ceremonial and women use the traditional motifs commercially to decorate mats,

Every mund consists of a dairy temple, a buffalo hundi, a shed to shelter calves

with a cluster of buildings on one side. The simple site planning ensures well

security within the slopes by the use of simple retaining structures, grading and

The arsh is quite unlike other tribal huts, its form oddly reminiscent of Chaitya

arch of Mauryan times. Shaped like a half cylinder it is constructed of wooden

planks, bamboo, reeds and grass. Either end is walled by planks (Thaw) set

vertically. The entrance is through a rectangular opening some 2 ½ feet high by 2

feet wide in one end wall, made small to keep out the cold and damp in these

high hills. On each side of the doorway is a raised platform, equivalent to a

verandah or thinna (built – in seat), a semi private area where people sit and talk.

At, either end of an arsh, two arch-shaped frames are made of long bunches of

These two support Podh, which are strong poles, often eleven in number, running

the length of the building. At one foot intervals a hoop of thef (bamboo-split

bunches) is lashed over the poles forming a ribcage. On this framework, courses

(awul) are lashed, giving the surface a ridged effect. To give a grand look to the

façade, the thef in front is covered with a cylindrical bunch of hay (Podar Tidth).

The interior, windowless and dark, consists of a single space. A raised earthen

platform takes up much of one side to serve as a sitting and sleeping place. The

hearth is the focus of the end farthest from the door. The kitchen, which

continuously smokes the hut, is the key to its sustenance from weather and

Toda Hut at the Manjkal Mund (near the Botanical Garden)

Entry to the hut with seats on both sides

Interior of the hut

View of the roof construction

View of the Hut’s facade

Interior of the Hut

View of the roof construction

The dairy temple called as Palivarsh, is modeled on an arsh (Toda Hut) and also

serves as a priest's dwelling. Only the high priest is allowed to get into the

temple and its premises, which is usually sunken from the ground level, sides of

this space built with random rubble packing. The entry is marked with two

vertical stone pillars, which is the only way to the sunken space.

Unlike the huts, the materials and techniques used for the temple are strictly

construction are specific species from different parts of Nilgiri Biospehere. The

Toda dairy temple at the Manjkal Mund (near the Botanical Garden)

The stone pole with the dairy temple in the background

Traditional temples, constructed as thatched cones called as Povarsh are seen in

only two munds, which have the regional significance among the Todas.

Cattle hundi (Thoovarsh) is the central livelihood element of the community. This

day. This is essentially a circular large open space, often kept along the slopes,

secure. On the upper part of the hundi is a water tank, scoped out of the slope

and the far end will be a drainage slit opening to the valley. Like in the temple,

for the buffaloes and marked with two vertical stone posts for its entry. A

separate small shed (Kodarsh) is provided for the calves of the herd.

Cattle hundi at the Muthunadu Mund

Calf hut at the Muthunadu Mund

experience. Like the Toda Architecture, the community was also found to be 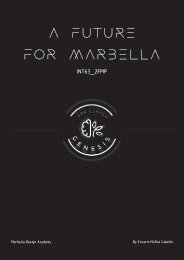 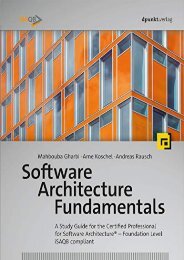 <strong>TODA</strong> <strong>ARCHITECTURE</strong> A <strong>Study</strong> Trip to the Nilgiris <strong>Biley</strong> E .Menon, Architect <strong>Chitra</strong> <strong>Biley</strong>, Landscape Architect This study is done as part of the Proposed Nilgiri Biosphere Park Project at Anaikatty <strong>by</strong> the Coimbatore Zoological Park Society and not to be referred or quoted for any other purpose. Our sincere thanks to Dr. Tarun Chhabra, Ooty and Ms. Muthsin & Ms. Athistamalli, Manjkal Mund who have taken us around and helped us to learn about Toda Community & Architecture