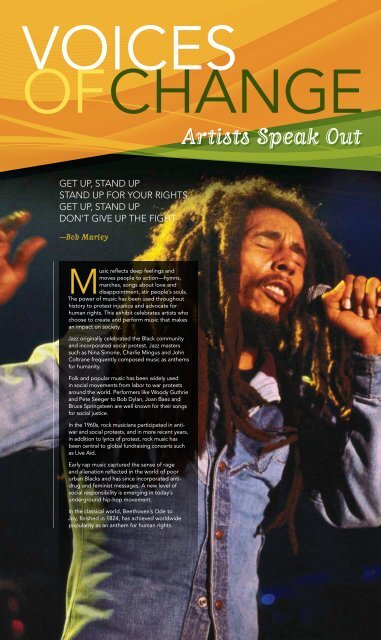 GET UP, STAND UP

STAND UP FOR YOUR RIGHTS

GET UP, STAND UP

DON’T GIVE UP THE FIGHT

marches, songs about love and

The power of music has been used throughout

history to protest injustice and advocate for

choose to create and perform music that makes

an impact on society.

such as Nina Simone, Charlie Mingus and John

Folk and popular music has been widely used

in social movements from labor to war protests

and Pete Seeger to Bob Dylan, Joan Baez and

Bruce Springsteen are well known for their songs

In the 1960s, rock musicians participated in anti-

war and social protests, and in more recent years,

in addition to lyrics of protest, rock music has

been central to global fundraising concerts such

and alienation reflected in the world of poor

urban Blacks and has since incorporated anti-

drug and feminist messages. A new level of

social responsibility is emerging in today’s

In the classical world, Beethoven’s Ode to

Joy, finished in 1824, has achieved worldwide

popularity as an anthem for human rights.

BUT I WON’T HEED THE BATTLE CALL

as a social activist. Since the band’s founding

in 1976, U2’s performances have included

the world because it can change people,” Bono

says. “You can’t fix every problem, but what you

Music opposing war is part of many cultures—

anti-war songs have probably been sung since

the birth of conflict. In the 19th Century songs

such as the Irish “Johnny I Hardly Knew Ye”

My Boy to Be a Soldier,” was popular during

World War I, and later conflicts have given rise

to a large body of anti-war songs from many

Last Night I Had the Strangest Dream • Simon and Garfunkel (1971)

ALL WE ARE SAYING

IS GIVE PEACE A CHANCE.

1980) once said, “If everyone demanded peace

instead of another television set, then there’d be

peace.” Lennon’s songs “Give Peace a Chance” and

“Imagine” are anthems of the peace movement.

Songs about peace come from many religious

traditions, as well as from popular music. Pro-peace

songs are generally designed to inspire, rather than

musical setting of the poem is an international peace

During times of war, peace songs vie with anti-war

songs as expressions of hope and dedication to a

singer, grew up in the American South and many of

her songs reflect her experiences with racism and her

dedication to black pride. ”I’m a real rebel with a cause,”

The American Civil Rights movement gave rise to many

Freedom songs such as “Keep Your Eye on the Prize,”

“If You Miss Me at the Back of the Bus,” and “We Shall

Overcome,” were anthems of the movement. Apartheid in

racial equality and prejudice continue to be explored by

musicians in a variety of genres.

WHEN YOU FEEL REALLY LOW

You’ve Got to Be Carefully Taught • Rogers and Hammerstein (1949)

Pasopa nansi ‘ndondemnyama we Verwoerd (Look out, Verwoerd, here are the

I CAN DO ANYTHING

The Changer and the Changed • Cris Williamson (1973)

Sisters are Doin’ it for Themselves • Eurythmics (1985)

Helen Reddy (b 1941) is an Australian-American

singer-songwriter whose “I Am Woman,” became

a worldwide feminist anthem. She says that, after

searching for songs to reflect how the woman’s

movement had changed her, “I realized that the song

I was looking for didn’t exist, and I was going to have

to write it myself.”

Songs about women’s rights and issues include

music from the women’s suffrage movement—often

changing lyrics to well known songs, such as “Oh

dear, what can the matter be, women are wanting

to vote,” and “Keep Woman in Her Sphere” to the

Near and Meg Christian. Many recent women’s songs

focus on independence and strength.

HOW MANY ROADS MUST

A MAN WALK DOWN

CALL HIM A MAN?

hero is someone who understands the responsibility that comes

with his freedom.” Dylan has long been celebrated both for his

music and for his dedication to social justice. “Blowing in the

Wind,” and “The Times They are Changing,” are iconic songs in

the civil rights and anti-war movements.

lyrics about the importance of caring for others. Social justice

music can be uplifting or angry, and is international. World

musicians sing about their homelands, about labor and peace and

THE ICE AGE IS COMING,

THE SUN IS ZOOMING IN

AND THE WHEAT IS GROWING THIN

BUT I HAVE NO FEAR

LIVE BY THE RIVER

English punk rock band The Clash was formed in

lyrics and rebellious attitude had a far-reaching

After the United States dropped the first atomic

bomb on Hiroshima, Japan, in 1945, songwriters

to the people to crusade/To see that no more

bombs are made.” A growing number of musicians

protested against further development of nuclear

with nuclear warfare since the 1980s and satirists

like Tom Lehr (“So Long Mom, I’m Off to Drop the

Bomb”) also dealt with the issue.

MY NAME IS LUKA

I LIVE ON THE SECOND FLOOR

I LIVE UPSTAIRS FROM YOU…

THEY ONLY HIT UNTIL YOU CRY

AND AFTER THAT YOU DON’T ASK WHY

Suzanne Vega (b 1959) writes and sings folk-inspired music with

literate lyrics. Her 1987 lyric about an abused child, “My Name is

Luka,” is internationally popular and one of her best-known songs.

Songs about children and their rights come out of many cultures,

from sentimental Victorian ballads to lullabies old and new. There

are a number of modern songs about the vulnerability of children

and the need to protect them. International projects in countries

like Senegal and Nepal encourage children to produce radio

Put A Little Love in Your Heart • Jackie Deshannon (1969)

We Are the World • Michael Jackson, Lionel Ritchie (1985)

WHERE DID ALL THE BLUE SKY GO?

POISON IS THE WIND THAT BLOWS…

OH, THINGS AIN’T WHAT THEY USED TO BE

The Landscape is Changing • Depeche Mode (1982)

Ecology),” from the his best known album, “What’s

Going On,” was enormously influential, rising to the top

of R&B charts and becoming one of his most famous

Songs that celebrate the Earth have been sung for

centuries. In modern times many songwriters have

beauty, the need to protect the planet and warning of

impending disasters are sung around the world.

Singer-songwriter, poet and visual artist Patti Smith (b 1946) has

been called “the poet laureate of punk rock.” She once described

her music as “three chord rock merged with the power of the word.”

than 25 million have died of AIDS. While improved treatment has

reduced the death rate in developed countries, the virus continues

to be rampant, particularly in Sub-Saharan Africa. Many singers and

songwriters have created songs to raise awareness and express

indignation about the lack of support for AIDS victims. Gay Men’s

choruses often include songs about AIDS in their repertoire.

…WOE TO THE YOUNG

ANOTHER HEARSE IS DRAWN

HAVE YOU SEEN DEATH SINGING

IN THE STRAW-COLORED LIGHT?

Living Like a Refugee • Sierra Leone Refugee All Stars (2006)

BEFORE WE PACKED OUR BAGS

AND LEFT ALL THIS BEHIND US IN THE DUST,

WE HAD A PLACE THAT WE COULD CALL HOME,

AND A LIFE NO ONE COULD TOUCH.

Rise Against is an American punk rock band, formed

in 1999, which supports animal rights and other liberal

about refugees who come to America only to face

searching for safety in times of conflict. Modern exiles

include economic and political refugees. Refugees

bring the music of their homelands with them, evolve

new musical forms and create songs about their plight.

In countries such as Afghanistan where music is banned

by fundamentalists, refugees preserve their musical

members, present the Humanity in the Arts Peace

Award to Claude Nobs, Founder and CEO of the

“The life and essence of art—whether it is a painting,

music or dance—lies in expressing a wellspring of

emotion, the universal realm of the human spirit. It is

a melding of the individual and the universal. That is

why great art reaches out beyond ethnic and national

barriers to move people the world over.”

Hancock and Wayne Shorter in

presented the ICAP Founder’s Award by board

Committee of Artists for Peace (ICAP) is

the creative power of the arts to bring about a peaceful

society. Collaborating with individuals and organizations

that share its mission for peace, ICAP employs dialogue

humanism and nonviolence in today’s youth. Since 2002,

ICAP has sponsored concerts, exhibits and dialogues in

support of the United Nations Declaration and Program of

Action on a Culture of Peace.

The mission of ICAP is to establish peace and develop

peacemakers through the transformative power of art.

at the Culture of Peace exhibit opening at the UN

Nations Institute for Disarmament Research, and

Herbie Hancock conduct a workshop on Artist as

Humanity in the Arts Peace Award.