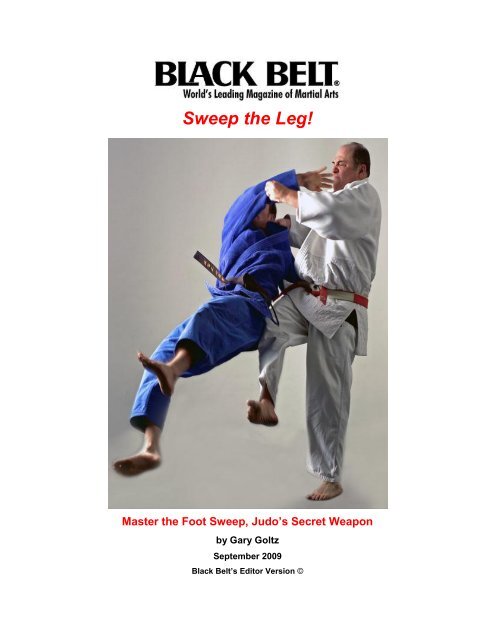 Judo is a way to effectively use both your

physical and spiritual strength. By training you in

attacks and defenses, it refines your body and

your soul, and helps you make the spiritual

essence of judo a part of your very being. In this

way, you are able to strive toward self-perfection

and contribute something of value to the world.

of the grappling art view that as a strength, however, because judo has managed to elegantly

master both endeavors while sacrificing none of its founder’s directives.

As such, judo, which has been a popular Olympic sport since 1964, teaches techniques that

function equally well in competition and on the street. One of the most useful and effective is the

An essential component of judo is the fine art of getting your opponent onto the mat, and the foot

advancing or retreating. It’s excellent as a counter and great for setting up combinations. Before

you can begin learning it, however, you and your training partner must know how to fall. Skip that

The name “judo” is composed of two root words: ju, which means “gentle,” and do, which is often

translated as “way.” Combine them, and you get “gentle way,” a term that reveals much about the

way the foot sweep is effected. To be efficient in its execution, you must yield to your opponent’s

energy so you can use his force against him. At no point do you meet force with force because

that would mean the stronger person always wins. The lesson: Don’t try to execute a sweep by

using every bit of power your body can generate to knock his supporting leg out from under him.

That wouldn’t be an intelligent way to fight.

If you don’t believe the lowly foot sweep can be effective against a skilled opponent, read an

account of Anton Geesink’s match with Japanese champ Akio Kaminaga at the Budokan in 1964.

Now a 10th-degree black belt, Geesink is renowned for having been the only foreigner to win a

gold medal (open weight division) at the Tokyo Olympics. In the final bout, he used a foot sweep

to bring down his famous foe. Afterward, the Dutchman attributed his win to the top-notch

Time to Get Technical

The foot sweep is effective because it’s fast and doesn’t require great amounts of strength. Fringe

benefit: You can use it from a distance without having to do a full 180-degree tai sabaki, or

turning motion, which is required when you execute most of judo’s major forward throws. These

The challenge associated with using the foot sweep in competition is that to become proficient,

you need near-perfect timing, coordination and balance. I say “challenge” and not “obstacle”

it. I was fortunate to have trained under one of the world’s best technicians, Kyu Ha Kim, who was

210 pounds, he’s a big man to this day. With his long legs and thick ankles, he resembles

While engaging in randori with Kim, he’d put me on the mat with such speed that it felt like I was

on a ride at Disneyland. The amazing part was, no matter which throw he used or how high I flew,

I always managed to execute a perfect breakfall. It’s as much a testament to Kim’s flawless

During those workouts, I never appreciated the beauty of the foot sweep. It wasn’t until after I

injured my knee in competition just before I turned 30 that everything jelled. As it became more

and more difficult for me to pull off those big throws during randori with my students, I reexamined

the concept of the foot sweep. In no time, the technique began working for me. In fact,

it became so effective and effortless that it seemed almost magical.

opponents, you’re well on your way to being able to use it against taller and heavier opponents.

Unlike when Kramer on Seinfeld beat all the little kids in his TKD class, using one of my young students who

knows how to fall correctly is an excellent way to train on the timing and coordination used in foot sweeps.

The keys to making it work, I realized, are constant movement, proper body positioning and a

sense of when to apply it.

To use the foot sweep in most applications, you need to turn your foot so the blade—the part of it

you would use to execute a side kick—is on the mat. That means the bottom of your foot is

The hockey stick helps to show the proper leg and foot position. The blade needs to remain on the ice or you will

miss the puck as does the foot needs to slide across the tatami in a circular motion.

The sweeping motion uses the sole of your foot to make contact with your opponent’s ankle, heel

or, in one technique, lower leg just below the knee. Your foot is propelled along a wide, circular

off-balance your opponent, after which they create a tsuri (lifting and pulling) movement.

Back to the analogy: For a hockey stick to effectively place a puck where it needs to be, its blade

has to remain on the ice. Fail to do that—perhaps by swinging the stick like a golf club—and you

may not impart sufficient power to get to the goal. Likewise, you must keep the blade of your foot

in contact with the mat as you execute your sweep. Simply let it slide across the surface until your

the bean bag to roll on its side. The picture on the right sends the bean bag smooth gliding across the tatami.

A great way to gauge the correctness of your foot sweep is to use a large, flat-bottom beanbag

Swain. Once you’ve mastered the mechanics of the sweep, you should be able to send it gliding

20 feet or more without rolling. It should make a nice swishing sound as it speeds away from you.

These days, most judo is practiced on regulation tatami surfaces such as the ones that are

available from Olympic medalist Jimmy Pedro and Zebra Mats. The company’s mats have a

colors. They provide an excellent surface on which you can practice your foot sweeps. Caution:

Falling repeatedly on regulation mats can be hard on your body if you’re not accustomed to it, so

you may want to mount them on a spring floor to absorb the impact.

In stark contrast is practicing foot sweeps on a carpeted floor. Don’t do it. You’ll wind up with

brush burns that resemble the road rash you’d get in a motorcycle accident. And that’s if you’re

lucky. If you’re unlucky, you could hit the floor at the wrong angle and fracture a bone or tear a

Somewhere in between the best and the worst is drilling on folding mats. Often found in

community centers and health clubs, they’re made of soft foam and have a thin vinyl cover. The

danger lies in the fact that their Velcro seams often separate during heavy usage. The resulting

gaps can lead to stubbed toes and injured ankles. To lessen the hazard, stretch a vinyl cover

tightly across your laid-out folding mats to keep them together. Even better: Use a canvas cover,

which gets slick with usage, resulting in a surface that’s blindingly fast.

The foot sweeps used in judo vary in the level of skill needed to perform them. They can be done

against an advancing or retreating opponent. They are excellent as counters and great for setting

up combinations. I will cover four of the basic ones that work from various directions and

the opponent’s right foot. Using a tsuri (lifting and pulling) motion turn your left wrist like checking a watch while

pushing with your left arm on the opponent’s right elbow upward moving him forward in a circular direction.

Sweep your opponents left ankle and snap his upper body sending him airborne.

Continue rotating your body and your opponents to your right.

Maintain control by holding your opponents left arm and turning to your left. Apply an arm lock or pin if needed.

As your opponent is moving backwards, turn his shoulders towards his left in a forward direction using your

while snapping your arms.

Continue your sweep throwing him to your right side and maintain control of his left arm for groundwork.

As your opponent moves forward pull him with your left hand while pushing him upward with your right hand.

Apply the sweep with your right foot to his left ankle and leg causing him to collapse into your body.

control of his left arm in case you need to move into groundwork to finish him.

So far, this discussion of the foot sweep has focused on its efficacy in competition. Because judo

is also designed for self-defense, the technique can be your secret weapon on the street. It can

much room to maneuver. That makes it ideal for use by law-enforcement, security and airline

while you attack his legs—makes it perfect for defense against a striker or an armed assailant.

That, coupled with the element of surprise, may be all you need to turn the tables long enough to

gain the advantage in a life-threatening situation. It’s why nearly all Japanese police officers are

accomplished at the foot sweep and why you should be, too.

the wrist and pulling him forward. Apply an open back hand strike to the eyes in order to distract him.

Stretch his body out as far as you can as you position yourself to apply the foot sweep to his rear right heal.

Continue pulling on his right arm as you do what Crease ordered Johnny to do “sweep the leg”.

Once the attacker hits the ground, apply a basic wrist lock in order to disarm him of the knife. Remember the

basic rule in law enforcement is that “hands kill” so always keep your eye on them.

Teaming Up With the U.S. Judo Association

officials while attending club practice sessions if a school registers five or more members; the

authority to make nationally recognized promotions through the USJA; the ability to organize

USJA-sanctioned tournaments; the opportunity to attend USJA grass-roots clinics that feature the

nation’s top coaches and competitors; and so on. To learn more go to USJA Black Belt Offer or

Gary Goltz, MBA, is a seventh-degree black belt and the head of the Goltz Judo Club in

Claremont, California. He is currently the President of the U.S. Judo Association. In his free time,

he works as a defensive-tactics consultant for the Los Angeles Police Department. For more 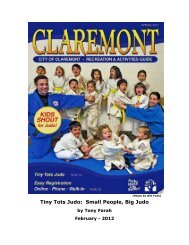 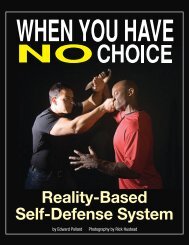 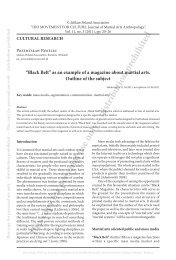