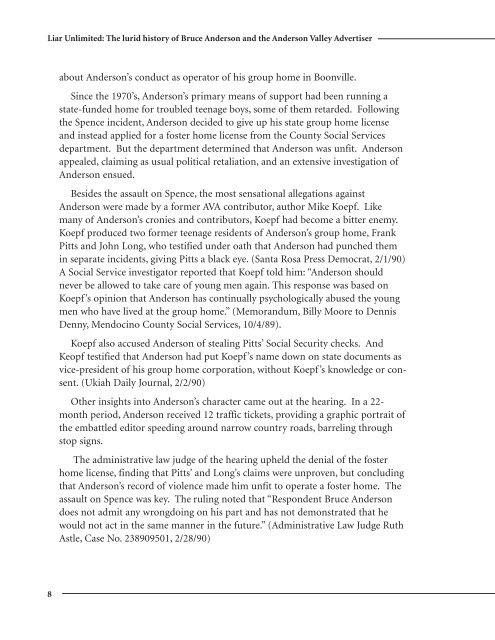 about Anderson’s conduct as operator of his group home in Boonville.

Since the 1970’s, Anderson’s primary means of support had been running a

state-funded home for troubled teenage boys, some of them retarded. Following

the Spence incident, Anderson decided to give up his state group home license

department. But the department determined that Anderson was unfit. Anderson

appealed, claiming as usual political retaliation, and an extensive investigation of

Besides the assault on Spence, the most sensational allegations against

Anderson were made by a former AVA contributor, author Mike Koepf. Like

many of Anderson’s cronies and contributors, Koepf had become a bitter enemy.

Pitts and John Long, who testified under oath that Anderson had punched them

A Social Service investigator reported that Koepf told him: “Anderson should

never be allowed to take care of young men again. This response was based on

Koepf’s opinion that Anderson has continually psychologically abused the young

men who have lived at the group home.” (Memorandum, Billy Moore to Dennis

vice-president of his group home corporation, without Koepf’s knowledge or consent.

Other insights into Anderson’s character came out at the hearing. In a 22month

the embattled editor speeding around narrow country roads, barreling through

home license, finding that Pitts’ and Long’s claims were unproven, but concluding

that Anderson’s record of violence made him unfit to operate a foster home. The

assault on Spence was key. The ruling noted that “Respondent Bruce Anderson

would not act in the same manner in the future.” (Administrative Law Judge Ruth