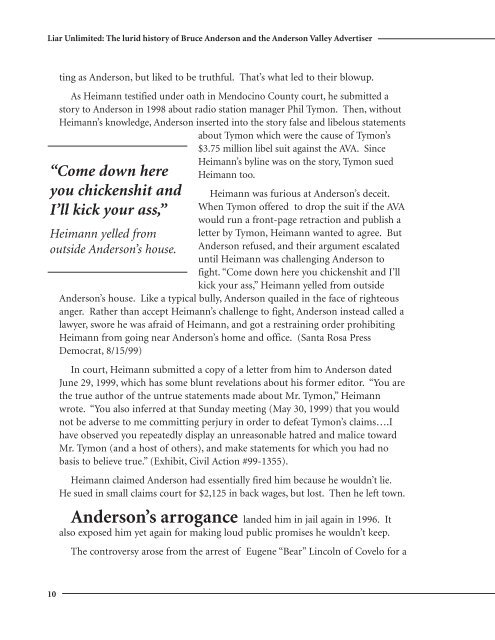 ting as Anderson, but liked to be truthful. That’s what led to their blowup.

As Heimann testified under oath in Mendocino County court, he submitted a

story to Anderson in 1998 about radio station manager Phil Tymon. Then, without

about Tymon which were the cause of Tymon’s

$3.75 million libel suit against the AVA. Since

Heimann’s byline was on the story, Tymon sued

Heimann was furious at Anderson’s deceit.

When Tymon offered to drop the suit if the AVA

would run a front-page retraction and publish a

letter by Tymon, Heimann wanted to agree. But

Anderson refused, and their argument escalated

until Heimann was challenging Anderson to

fight. “Come down here you chickenshit and I’ll

kick your ass,” Heimann yelled from outside

Anderson’s house. Like a typical bully, Anderson quailed in the face of righteous

anger. Rather than accept Heimann’s challenge to fight, Anderson instead called a

lawyer, swore he was afraid of Heimann, and got a restraining order prohibiting

In court, Heimann submitted a copy of a letter from him to Anderson dated

June 29, 1999, which has some blunt revelations about his former editor. “You are

the true author of the untrue statements made about Mr. Tymon,” Heimann

not be adverse to me committing perjury in order to defeat Tymon’s claims….I

have observed you repeatedly display an unreasonable hatred and malice toward

Mr. Tymon (and a host of others), and make statements for which you had no

Heimann claimed Anderson had essentially fired him because he wouldn’t lie.

He sued in small claims court for $2,125 in back wages, but lost. Then he left town.

Anderson’s arrogance landed him in jail again in 1996. It

also exposed him yet again for making loud public promises he wouldn’t keep.

shootout with sheriff’s deputies in 1995. Sheriff’s deputy Bob Davis and a friend of Lincoln’s, Leonard Peters, were killed. After a long manhunt, Lincoln surrendered and was charged with murder. While he was in jail, Lincoln smuggled out a letter which was published in the AVA. The prosecutor immediately subpoenaed <strong>Anderson</strong> for a copy of the letter and the envelope it came in, so he could verify Lincoln had actually written it. It was potentially crucial evidence, said the prosecutor, because it placed Lincoln at the scene of the shootout and gave his version of the events, and would help confirm or deny his claim of selfdefense. Since the letter had been published, it wasn’t protected under the “press shield law” that applies to journalists’ sources. The prosecutor had the absolute right to obtain the evidence. Once again, <strong>Anderson</strong> jumped at the chance to play the heroic rebel. “I’m not going to give them the letter, and I’ll go to jail if I have to over it,” he proclaimed. (Santa Rosa Press Democrat, 3/7/96). Available online at www.<strong>Liar</strong><strong>Unlimited</strong>.com Judi Bari’s cartoon about <strong>Bruce</strong> <strong>Anderson</strong>’s instant retreat from his vow to hold out in jail for year rather than surrender the Bear Lincoln letter (1996). <strong>Anderson</strong> swore he would hold out for a year, but only lasted a weekend. In court, he told the judge he would “never” turn over the letter, and bombastically told him, “since you’re going to inconvenience me for a year, I hope you’ll allow me the convenience of going to jail today.” (Albion Monitor, 5/27/96) Sure enough, the judge ordered <strong>Anderson</strong> jailed for contempt of court. Rather than holding out for a year, <strong>Anderson</strong> lasted only for the weekend before succumbing to lack of coffee. He telephoned his brother Rob and instructed him to 11