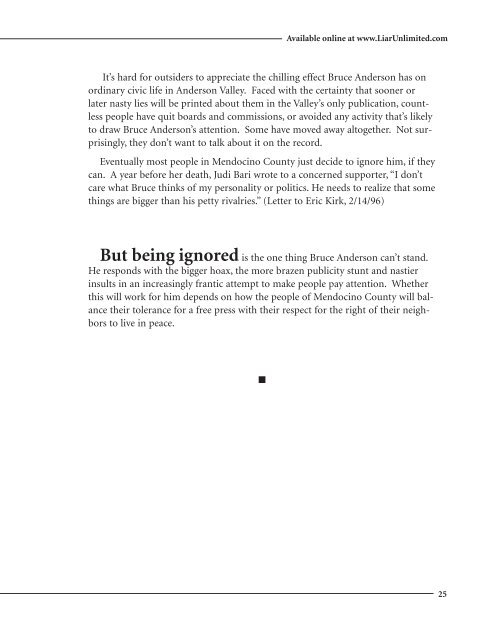 ordinary civic life in Anderson Valley. Faced with the certainty that sooner or

later nasty lies will be printed about them in the Valley’s only publication, countless

people have quit boards and commissions, or avoided any activity that’s likely

to draw Bruce Anderson’s attention. Some have moved away altogether. Not surprisingly,

they don’t want to talk about it on the record.

Eventually most people in Mendocino County just decide to ignore him, if they

can. A year before her death, Judi Bari wrote to a concerned supporter, “I don’t

care what Bruce thinks of my personality or politics. He needs to realize that some

But being ignored is the one thing Bruce Anderson can’t stand.

He responds with the bigger hoax, the more brazen publicity stunt and nastier

insults in an increasingly frantic attempt to make people pay attention. Whether

to live in peace.

<strong>Liar</strong> <strong>Unlimited</strong>: The lurid history of <strong>Bruce</strong> <strong>Anderson</strong> and the <strong>Anderson</strong> Valley Advertiser 24 A few months later, <strong>Anderson</strong> printed Cherney’s photo in the Advertiser, under the words, “Shoot to Kill (No Reward).” (AVA, 11/27/02) Cherney wasn’t amused and filed a complaint with the District Attorney. So <strong>Anderson</strong> ran the photo again and again. The Santa Rosa Press-Democrat was provoked to run an editorial about the incident titled, “Senseless Stunt.” The editorial asked, “Makes you wonder what else he considers comedy. Snuff films?” (12/6/02) Tolerance is one of the few virtues in our culture. “Freedom of the Press” is practically a religion, as it should be. But every freedom has its abusers and how we handle such abuse is the real test of our society. Most sociopaths are limited to raving on the sidewalk. <strong>Bruce</strong> <strong>Anderson</strong> manages to put out a newspaper every week, using a show of poverty and likely sheltering of assets to dodge the threat of litigation. His record of doing this for 20 years, lying without limit, is a kind of tribute to the demonic energy which has attracted readers who don’t really care whether or not his insults are true or false, as long as they amuse. But the residents of Mendocino County, and especially the <strong>Anderson</strong> Valley, aren’t amused. They are the week-to-week targets of his lies and fail to see the quaint charm of this “country editor” who is occasionally featured in wry profiles by major newspapers. The onslaught of disinformation and ridicule has been especially demoralizing to community activists who are so often his targets. On-the-street comments on <strong>Bruce</strong> <strong>Anderson</strong> recorded by one reporter were: “‘Mean-spirited trash—that’s all he prints,’ said one Boonville retiree, who hastened to add: ‘But don’t you tell him I said it.’” “‘He’s nasty, a bully,’ declared Robert Glover, a lifelong resident of the region. ‘Most people only read the paper for defensive reasons—to make sure he hasn’t taken off on you.’” “‘In a sense,’ explained a sheriff’s deputy who asked not to be named, ‘you haven’t arrived until you’ve been sliced and diced in the AVA.’” (Los Angeles Times, 2/14/96).