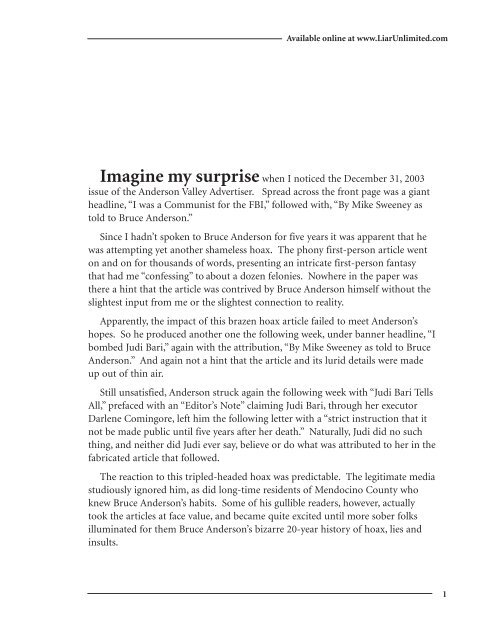 Imagine my surprise when I noticed the December 31, 2003

issue of the Anderson Valley Advertiser. Spread across the front page was a giant

headline, “I was a Communist for the FBI,” followed with, “By Mike Sweeney as

was attempting yet another shameless hoax. The phony first-person article went

on and on for thousands of words, presenting an intricate first-person fantasy

that had me “confessing” to about a dozen felonies. Nowhere in the paper was

slightest input from me or the slightest connection to reality.

Apparently, the impact of this brazen hoax article failed to meet Anderson’s

hopes. So he produced another one the following week, under banner headline, “I

bombed Judi Bari,” again with the attribution, “By Mike Sweeney as told to Bruce

Anderson.” And again not a hint that the article and its lurid details were made

up out of thin air.

All,” prefaced with an “Editor’s Note” claiming Judi Bari, through her executor

Darlene Comingore, left him the following letter with a “strict instruction that it

not be made public until five years after her death.” Naturally, Judi did no such

thing, and neither did Judi ever say, believe or do what was attributed to her in the

The reaction to this tripled-headed hoax was predictable. The legitimate media

studiously ignored him, as did long-time residents of Mendocino County who

knew Bruce Anderson’s habits. Some of his gullible readers, however, actually

took the articles at face value, and became quite excited until more sober folks

illuminated for them Bruce Anderson’s bizarre 20-year history of hoax, lies and