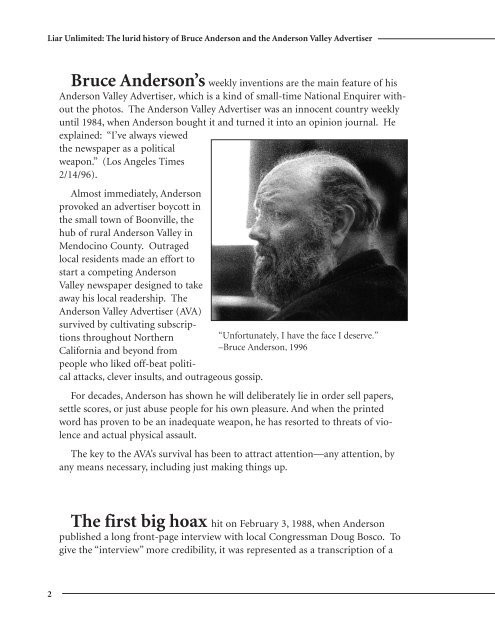 Bruce Anderson’s weekly inventions are the main feature of his

Anderson Valley Advertiser, which is a kind of small-time National Enquirer without

the photos. The Anderson Valley Advertiser was an innocent country weekly

until 1984, when Anderson bought it and turned it into an opinion journal. He

the newspaper as a political

provoked an advertiser boycott in

the small town of Boonville, the

hub of rural Anderson Valley in

local residents made an effort to

away his local readership. The

“Unfortunately, I have the face I deserve.”

California and beyond from –Bruce Anderson, 1996

For decades, Anderson has shown he will deliberately lie in order sell papers,

settle scores, or just abuse people for his own pleasure. And when the printed

word has proven to be an inadequate weapon, he has resorted to threats of violence

The key to the AVA’s survival has been to attract attention—any attention, by

any means necessary, including just making things up.

The first big hoax hit on February 3, 1988, when Anderson

give the “interview” more credibility, it was represented as a transcription of a