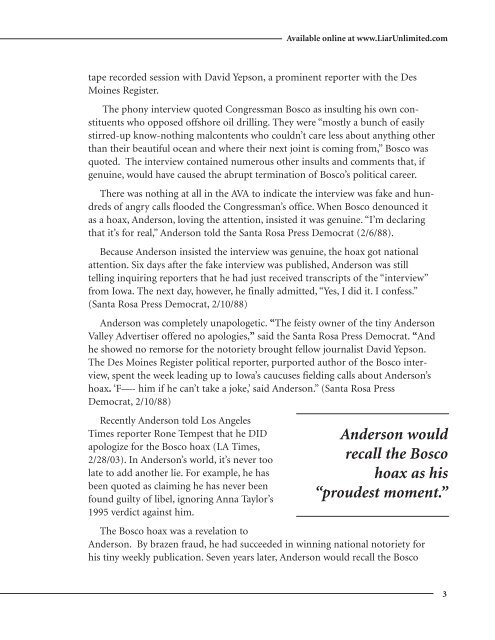 tape recorded session with David Yepson, a prominent reporter with the Des

The phony interview quoted Congressman Bosco as insulting his own constituents

who opposed offshore oil drilling. They were “mostly a bunch of easily

than their beautiful ocean and where their next joint is coming from,” Bosco was

quoted. The interview contained numerous other insults and comments that, if

genuine, would have caused the abrupt termination of Bosco’s political career.

of angry calls flooded the Congressman’s office. When Bosco denounced it

as a hoax, Anderson, loving the attention, insisted it was genuine. “I’m declaring

Because Anderson insisted the interview was genuine, the hoax got national

attention. Six days after the fake interview was published, Anderson was still

from Iowa. The next day, however, he finally admitted, “Yes, I did it. I confess.”

Anderson was completely unapologetic. “The feisty owner of the tiny Anderson

he showed no remorse for the notoriety brought fellow journalist David Yepson.

Times reporter Rone Tempest that he DID

late to add another lie. For example, he has

been quoted as claiming he has never been

The Bosco hoax was a revelation to

Anderson. By brazen fraud, he had succeeded in winning national notoriety for