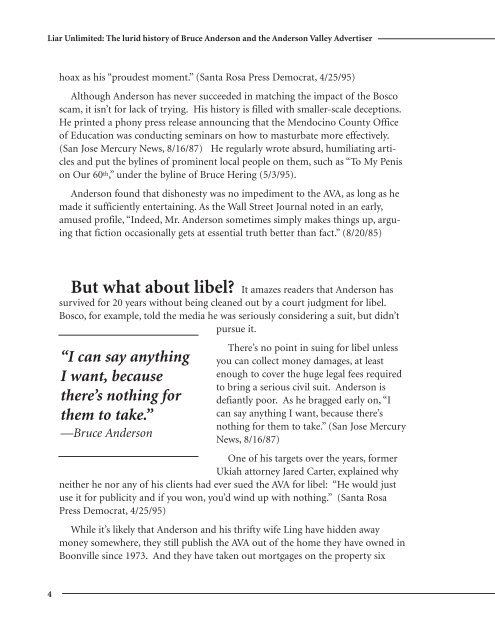 scam, it isn’t for lack of trying. His history is filled with smaller-scale deceptions.

and put the bylines of prominent local people on them, such as “To My Penis

Anderson found that dishonesty was no impediment to the AVA, as long as he

made it sufficiently entertaining. As the Wall Street Journal noted in an early,

that fiction occasionally gets at essential truth better than fact.” (8/20/85)

But what about libel? It amazes readers that Anderson has

survived for 20 years without being cleaned out by a court judgment for libel.

Bosco, for example, told the media he was seriously considering a suit, but didn’t

“I can say anything

There’s no point in suing for libel unless

you can collect money damages, at least

to bring a serious civil suit. Anderson is

defiantly poor. As he bragged early on, “I

can say anything I want, because there’s

nothing for them to take.” (San Jose Mercury

One of his targets over the years, former

neither he nor any of his clients had ever sued the AVA for libel: “He would just

use it for publicity and if you won, you’d wind up with nothing.” (Santa Rosa

money somewhere, they still publish the AVA out of the home they have owned in

Boonville since 1973. And they have taken out mortgages on the property six