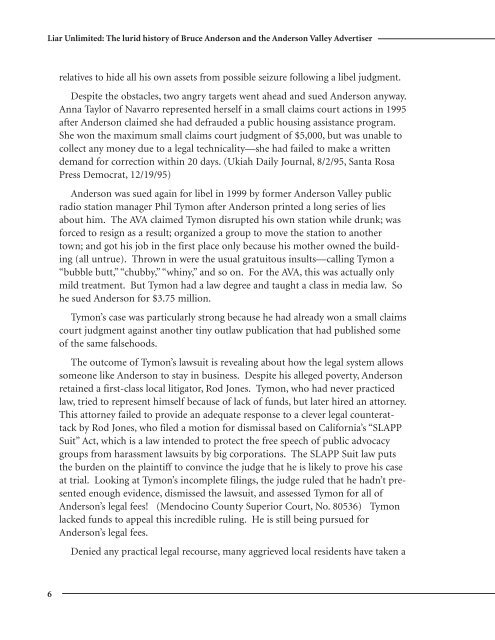 relatives to hide all his own assets from possible seizure following a libel judgment.

Despite the obstacles, two angry targets went ahead and sued Anderson anyway.

after Anderson claimed she had defrauded a public housing assistance program.

She won the maximum small claims court judgment of $5,000, but was unable to

about him. The AVA claimed Tymon disrupted his own station while drunk; was

forced to resign as a result; organized a group to move the station to another

town; and got his job in the first place only because his mother owned the building

(all untrue). Thrown in were the usual gratuitous insults—calling Tymon a

“bubble butt,” “chubby,” “whiny,” and so on. For the AVA, this was actually only

mild treatment. But Tymon had a law degree and taught a class in media law. So

court judgment against another tiny outlaw publication that had published some

of the same falsehoods.

someone like Anderson to stay in business. Despite his alleged poverty, Anderson

law, tried to represent himself because of lack of funds, but later hired an attorney.

by Rod Jones, who filed a motion for dismissal based on California’s “SLAPP

Suit” Act, which is a law intended to protect the free speech of public advocacy

at trial. Looking at Tymon’s incomplete filings, the judge ruled that he hadn’t presented

enough evidence, dismissed the lawsuit, and assessed Tymon for all of

lacked funds to appeal this incredible ruling. He is still being pursued for

Denied any practical legal recourse, many aggrieved local residents have taken a