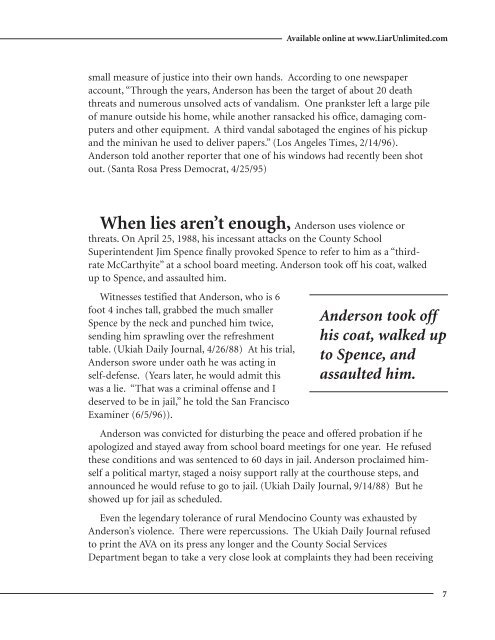 small measure of justice into their own hands. According to one newspaper

account, “Through the years, Anderson has been the target of about 20 death

threats and numerous unsolved acts of vandalism. One prankster left a large pile

of manure outside his home, while another ransacked his office, damaging computers

and other equipment. A third vandal sabotaged the engines of his pickup

threats. On April 25, 1988, his incessant attacks on the County School

McCarthyite” at a school board meeting. Anderson took off his coat, walked

up to Spence, and assaulted him.

Witnesses testified that Anderson, who is 6

Spence by the neck and punched him twice,

sending him sprawling over the refreshment

Anderson swore under oath he was acting in

self-defense. (Years later, he would admit this

was a lie. “That was a criminal offense and I

deserved to be in jail,” he told the San Francisco

his coat, walked up

apologized and stayed away from school board meetings for one year. He refused

these conditions and was sentenced to 60 days in jail. Anderson proclaimed himself

a political martyr, staged a noisy support rally at the courthouse steps, and

showed up for jail as scheduled.

Even the legendary tolerance of rural Mendocino County was exhausted by

Anderson’s violence. There were repercussions. The Ukiah Daily Journal refused