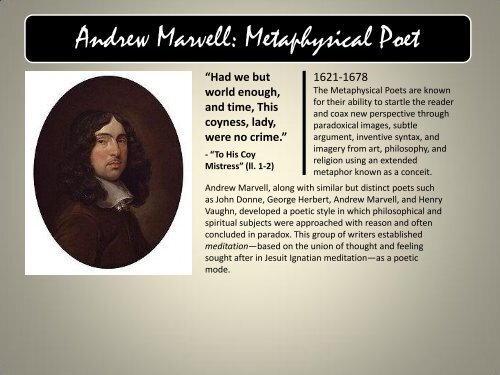 The Metaphysical Poets are known

for their ability to startle the reader

and coax new perspective through

imagery from art, philosophy, and

metaphor known as a conceit.

Andrew Marvell, along with similar but distinct poets such

Vaughn, developed a poetic style in which philosophical and

spiritual subjects were approached with reason and often

concluded in paradox. This group of writers established

meditation—based on the union of thought and feeling

sought after in Jesuit Ignatian meditation—as a poetic

Due to the inconsistencies and ambiguities within his

work and the scarcity of information about his personal

life, Andrew Marvell has been a source of fascination for

scholars and readers since his work found recognition in

the early decades of the twentieth century. Born in

1621, Marvell grew up in the Yorkshire town of Hull

where his father, Reverend Andrew Marvell, was a

lecturer at Holy Trinity Church and master of the

Marvell's poems, one in Latin and one in Greek, were

published in an anthology of Cambridge poets. After

receiving his B.A. in 1639, Marvell stayed on at Trinity,

however, his father drowned in the Hull estuary and

Marvell abandoned his studies. During the 1640's

Dutch, French, Spanish, and Italian, to his Latin and

Cromwell's government and represented Hull to

Parliament during the Restoration. His very public

and upheaval—almost certainly led Marvell away

from publication. No faction escaped Marvell's

satirical eye: he criticized and lampooned both the

court and parliament. Indeed, had they been

published during his lifetime, many of Marvell's

Death," an attack on the famous Cromwellian—

would have made him rather unpopular with

Marvell used his political status to free Milton, who

was jailed during the Restoration, and quite possibly

saved the elder poet's life. In the early years of his

of a fever. Gossip of the time suggested that the

Jesuits (a target of Marvell's satire) had poisoned

him. After his death he was remembered as a fierce

Andrew Marvell, now considered one of the greatest

little of his scathing political satire and complex lyric

verse in his lifetime. Although Marvell published a

handful of poems in anthologies, a collection of

Marvell's work did not appear until 1681, three years

after his death, when his nephew compiled and

found a publisher for Miscellaneous Poems. The

circumstances surrounding the publication of the

"Mary Marvell," who claimed to be Marvell's wife,

wrote the preface to the book. "Mary Marvell" was,

posed as Marvell's wife, apparently, in order to keep

Marvell's small estate from the creditors of his

contributes to the mystery that surrounds the life of

If there were enough time, the speaker and his

mistress could go on courting forever, but time is fast

disappearing. Therefore, they must squeeze their joys

into today; there is no time to be coy or aloof.

The exotic, distant, flowing Ganges is contrasted with the

majestic ruby, which is to gems what the sun is to the planets

and the king to the rest of society, is contrasted with the

vegetative, or growing, capacity of the soul of plants or

animals, which must take time to reach normal growth and

would need much longer to grow “Vaster than empires.” The

most celebrated image of the poem, “Time’s wingéd chariot,”

combines the image of speed with harassment and gains even

more power by being contrasted with the sterility of

“Deserts” and the stark stillness of “vast eternity.” The

well as the possible allusion to Geoffrey Chaucer’s “Miller’s

Tale” in “quaint honor”) has been questioned, but the worms

poem. So also does the contrast in the images of eating: the

eager appetite of the “amorous birds of prey” pitted against

the slow, trapped, defeated helplessness of being devoured,

slow bite by slow bite, in the lazy-but-powerful jaws of time.

There is a declaration of unity and even mutuality, should

the hoped-for culmination of his pleading be reached, in

the image of their sweetness and their strength (not her

sweetness and his strength) being rolled up tightly into

one ball. The image increases in vitality and strength

(hinting at a more fitting end to virginity than a

congregation of politic worms) as this ball tears through

the gates of life. There is power in the oxymoronic mixing

of toughness, strife, and iron with pleasures and the

fertility of the gates of life. The final image of the sun

standing still could possibly be an allusion to Joshua’s

commanding the sun to stand still so he could finish the

Zeus performing the same feat to extend by twenty-four

hours his night with the lovely Alcmene in the pleasant

which some editors separate from the last section of the

sense of the poem. The alliteration of “long love’s day” combines with

time in the first section of the poem, despite its quick succession of

images. The repeated, aspirated h sounds and the ch sound in

“chariot” almost make the reader feel the rushing of wind that

accompanies the beating of wings. In the last section of the poem,

suggests the action of rolling something up: “Let us roll all our

strength and all/ Our sweetness up into one ball.” The sudden shift to

frontal vowels and the onomatopoeic “tear” provides an abrupt shift

as the ball takes on the characteristics of a cannonball. The effective

the experience of meaning by correlating sound with sense. Note the

strife,” and “Stand still.” Another rhythmic effect that underscores the

syllable coming after an enjambment ending in a long vowel that

crescendos into the accent. Especially effective are “I would/ Love

Seduction is the theme of most carpe diem poems.

What distinguish Marvell’s poem from other carpe diem

poems is the careful integration of time and seduction so

that it is not clear which is the predominant theme. Time

hovers over the first section of the poem in its slow

counting of the years ideally available for one to express

love. Time threateningly enters the second section of the

poem, relentlessly reminding those who would love that a

long postponement of joy means no joy at all. Time moves

into the present tense in the third section, obliterating a

dried-out past and a sterile future in the intensity of now,

the only time in which willing lovers discover themselves

and achieve fulfillment. In the final couplet of the poem is

its final reversal: Time no longer controls lovers, but they

Zeus perhaps, to make it stand still, but time speeds

through its course at the command of lovers.