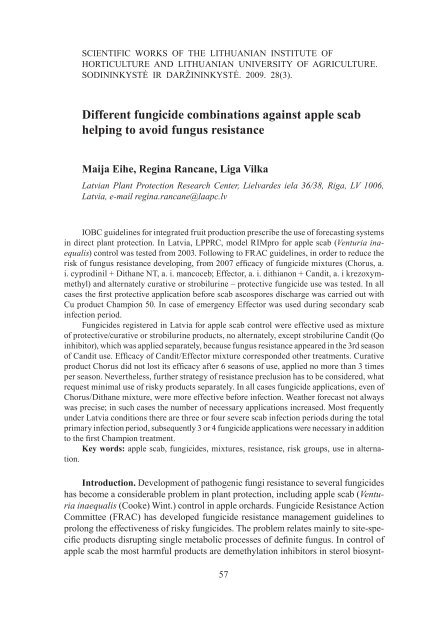 SCIENTIFIC WORKS OF THE LITHUANIAN INSTITUTE OF

HORTICULTURE AND LITHUANIAN UNIVERSITY OF AGRICULTURE.

control was tested from 2003. Following to FRAC guidelines, in order to reduce the

risk of fungus resistance developing, from 2007 efficacy of fungicide mixtures (Chorus, a.

and alternately curative or strobilurine – protective fungicide use was tested. In all

Cu product Champion 50. In case of emergency Effector was used during secondary scab

inhibitor), which was applied separately, because fungus resistance appeared in the 3rd season

of Candit use. Efficacy of Candit/Effector mixture corresponded other treatments. Curative

product Chorus did not lost its efficacy after 6 seasons of use, applied no more than 3 times

per season. Nevertheless, further strategy of resistance preclusion has to be considered, what

request minimal use of risky products separately. In all cases fungicide applications, even of

was precise; in such cases the number of necessary applications increased. Most frequently

to the first Champion treatment.

has become a considerable problem in plant protection, including apple scab (Venturia

prolong the effectiveness of risky fungicides. The problem relates mainly to site-specific

to anti-resistance management strategies, risky products are used in mixtures or in

In Latvia traditionally minimal amount of pesticides was used on horticultural

pesticide use to save yield quality. The choice of fungicides is poor. Therefore,

Protection Research Centre for adoption under conditions of Latvia. In the first years

was used shortly after RIMpro warning about risky infection. During the last years,

strategies to prevent fungus resistance were considered: use of fungicide mixtures with

different modes of action or their use in alternation, as much as possible not several

times in turn, use of protective products before forecasted infection as well as all applications

before infection. There was little experience of fungicide mixtures efficacy

in apple scab control in Latvia up till now. In 2007 and 2008 field trial was arranged

Object, methods and conditions. Field trial was carried out in peasant farm

“Kalnanoras”, Ikskile, Ogre district in 2007–2008. There was investigated apple cultivar

in randomized blocks. Untreated control plots located out of blocks. In the trial

exception of Score 250 (a. i. difenoconazole, SBI, DMI), against which considerable

fungus resistance was observed in trial orchard after 5 years of use.

In anti-resistance management strategy the prophylaxis in advance of primary

recommended (Köller, Parker et al., 2005). In the trial this application was carried out

with copper fungicide Champion 50 in all treatments.

All products were used in maximal rates registered in Latvia: Champion

infection control. If effectiveness of applications was insufficient, fungicide use was

Real beginning, intensity and the end of ascospores release was determined on

collected after every rain and spores counted under microscope. Discharge of scab

ascospores commonly is ending in the middle of June.

except untreated control. The first scab ascospores were released on 20.04.

In 2007 the trial was carried out using systemic fungicide Chorus (alone, no

more than 3 times per primary infection period), mixture of Chorus and protective

as Dithane and Chorus in alternation accordingly shortly before and after infection.

Before or shortly after infection (24 hours) protective Efector, mixture of Efector and

application was taken in account too. Chorus in trial territory up till now was used for

6 years 2–3 times per season without symptoms of efficacy decrease, Candit – for 3

RIM risk values per day in

Dithane (D) before, Chorus after

Effector (E) before forecasted or

Effector in turn with Candit (Ca)

Weather conditions during May were rainy, especially in the 3rd 10-day period,

when precipitation sum was 49.8 mm, 293 % from normal, and mean temperature

infection period was necessary. Additional applications with Effector were carried out

27.07 in all treatments. It is permitted to use the low resistance risk product Effector

for 6 times per season in Latvia.

In 2008 all fungicide combination schedules were repeated, except 7 th treatment,

Following to FRAC recommendations, all fungicide treatments were carried out before

Dithane (D) in turn with

first scab ascospores were released on 17.04.

Weather conditions in May were comparably dry and cool; some days it rained,

without precipitation. Rainy period lasted from June 11 th until the middle of July.

were carried out during secondary infection period. For weather forecast data

Apple growth stages are characterized according to BBCH scale.

from the beginning of disease appearance in control treatment, before each fungicide

application and further after rainy periods, on leaves – till the end of July, on fruits – until

harvesting. Disease extent was evaluated according to % scale of damaged surface.

The data were subjected to analysis of variance. Significant differences at the

probability of 95 % are shown in the tables by letters. Data of control treatment are

not included in processing.

periods. At the end of April – beginning of May precipitation appeared later than

forecasted, subsequently the first test treatment was carried out too early in schedules

with planned fungicide application shortly before infection (see Table 2). As a result,

according to the schedule of planned applications, before infection four treatments

without significant difference among them, but in the 7 th treatment, where 2 times

strobilurine Candit was used, there was clearly visible the loss of effectiveness, what

19.06 and 12.07, scab infection leveled with other treatments until the end of July

All schedules, except treatment with Candit

Candit for 2 times separately in alternation

According to fruit infection extension, the same tendency appeared as on the leaves:

scab infection level in the beginning of July in comparison with other schedules. There

for 3 times after primary infection periods, though on leaves, as infection source,

such tendency did not appear. Possibly mixture with Dithane could be used before

difference between treatments. There remained the tendency of higher infection in

Dithane/Chorus mixture treatment. The decrease of infection in Candit treatment was

due to dropping of more damaged fruits (Table 5).

All schedules, except treatment with Candit

Candit for 2 times separately in alternation

In the tables there are shown only more characteristic results of 10 assessments.

period, like in 2007. Applying all fungicides 1–4 days before forecasted rain

leaves in total. There was some significant difference between treatments in separate

assessments, but the tendency did not maintain during assessment period. At the end

(Table 6). Decrease of leaf infection level on 11.07 in comparison with previous assessment

was due to forming young uninfected leaves.

period was significantly less effective. Such results did not indicate the appearance of

of systemic product was too short to protect fruits until harvest (Table 7).

Mixture of Dithane/Chorus and Effector

Discussion. The use of protecting and risky fungicide mixtures during the primary

scab infection period, according to the results of several authors, is the most effective

component in apple scab protection schedules. Mixture of anilinopyrimidine with

results, by comparison of effectiveness of Dithane/ Chorus mixture and Chorus

alone. According to strobilurins, several trial results showed that before resistance

2004). However, if the symptoms of resistance are observed, strobilurins will have

to be used only in mixture with another scab fungicide (Köller, Parker et al., 2005).

the mixture with krezoxym-metyl products by manufacturer company BASF. Therefore,

Effector/Candit in protection schedule had similar effectiveness in comparison with

Conclusions. 1. The use of protecting, low resistance risk fungicide Dithane

NT (a. i. mancozeb) 1–4 days before primary apple scab infection in alternation with

systemic, medium risky product Chorus 75 (a. i. cyprodinil) shortly before or after

infection, as well as the use of Dithane/ Chorus mixture at dosage of 75 % from full

rate of each product before infection in resistance preventive protection schedule

alternation with Effector, while the use of Effector/Candit mixture for 3 times shortly

effective in comparison with other resistance preventive protection schedules.

control during secondary scab infection period. Such schedule is not recommended

4. Low risk protecting fungicide Effector (a. i. dithianone) used for 3 times by

resistance preventive schedules, but such schedule is not recommended in integrated

5. Planning fungicide treatments before infection can increase the number of

sprays if weather forecast is not precise.

to strobilurin and dodine fungicides in Polish apple orchards. Zemdirbyste-

populations to anilinopyrimidine fungicides and their contribution to scab management

strategies and the role of integrated use. Annual Review of Phytopathology, 29:

to the strobilurin fungicides (www.plantmanegementnetwork.org/pub/php/ 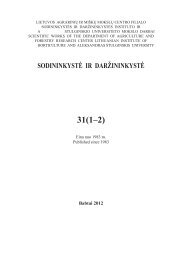 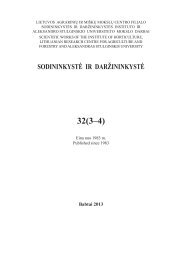 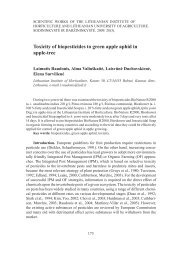 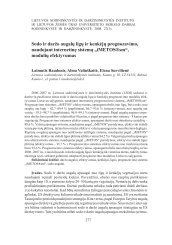 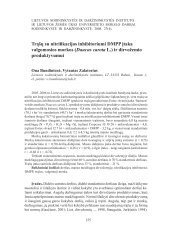 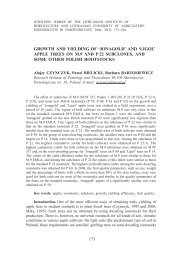 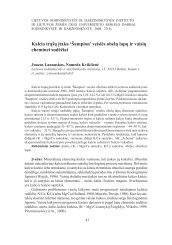 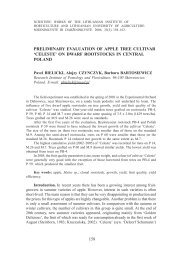 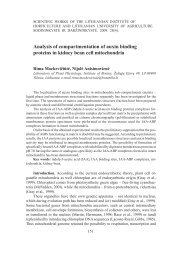 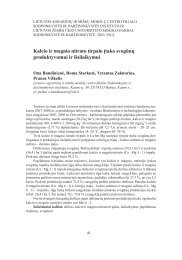 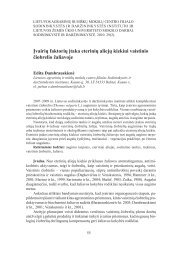 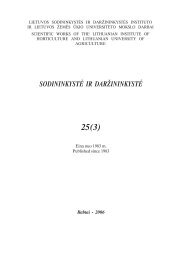 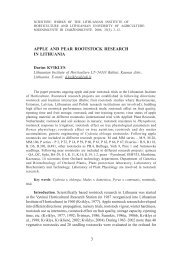 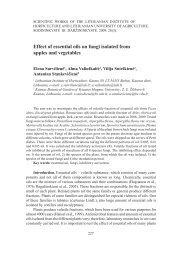 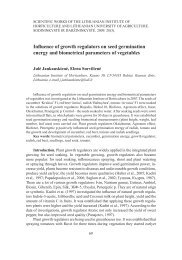 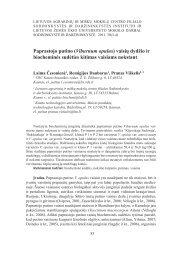 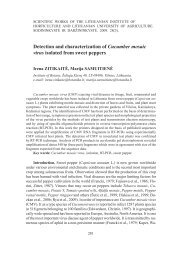 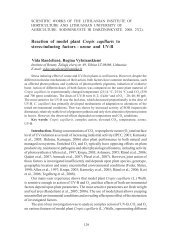 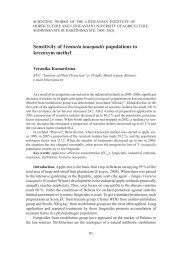 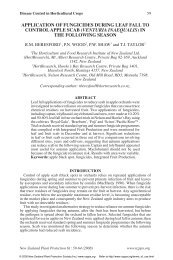 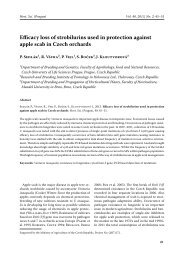 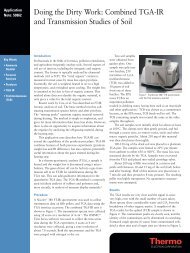