• In the Indonesian language, orang means “person” and utan is derived from hutan, which means “forest.” Thus,

• Orangutans are only found in Indonesia and Malaysia on the islands of Borneo and Sumatra.

• Orangutans are an endangered species, which means the population of orangutans is so low that they are in

• Orangutans are the largest arboreal (tree-dwelling) mammals in the world; adults range in size from 90 to 300 lbs.

They have many physical adaptations that allow them to live in the forest canopy, such as an extended range of

motion in their hip and shoulder joints.

are not sure why their hair is red.

to have lighter hair and pale moustaches around their faces.

• Like humans, orangutans have opposable thumbs. Their big toes are also opposable. Unlike humans,

approximately one third of all orangutans do not have nails on their big toes.

Orangutans are mainly frugivorous: they eat mostly fruit. Depending on the place and season, they may add leaves, bark,

flowers, honey, insects, and even eggs to their menu. Did you know they spend up to 60% of their waking hours searching

for and eating food? Orangutans’ highly developed intelligence helps them remember where food, like fruit trees, is

located and when it will be ripe and ready to eat.

Orangutans are dependent on the rainforests of Borneo and Sumatra: they inhabit lowland rainforest ecosystems including

peat swamp forests. Forests with big trees and lots of fruit have higher densities of orangutans.

• All populations of orangutans are threatened with extinction, because their rainforest habitats are being cut down

to make paper and to create room for giant palm oil farms.

• Palm oil is used in roughly half of all manufactured goods sold at the supermarket: from cereal to lipstick to soap to

YOU CAN DO SOMETHING TO HELP STOP

• *Now that you know orangutan homes are being cut down by companies to make paper and palm oil,

YOU can ask those companies to protect orangutans and the forests they call home!

• *You can also raise money at your school to adopt an orangutan and support Dr. Galdikas’s programs to

protect rainforests. Your efforts can help local communities stop their land from being changed from a

rainforest to a plantation for palm oil or turned into paper.

> See Page 8 for all the ways YOU can be a Rainforest Hero!

• Indonesia is an island nation containing over 17,000 different islands. Indonesia only takes up 1% of the earth’s

land surface, but it is home to 12% percent of all mammal species, 16% of reptile and amphibian species, and 17%

• Indonesia is home to hundreds of Indigenous cultures and different languages. Almost 20 million people rely on

these intact rainforests for their livelihood.

• Borneo, one of Indonesia’s biggest islands, has some of the richest biodiversity on earth, including more

carnivorous plant species than any other place on the planet.

over a million acres.

Uses of the Area

The island of Borneo, Indonesia

• Originally, the park was established in the 1930’s by the Dutch Colonial

government as a game reserve.

• In 1977 it became a UNESCO Biosphere Reserve.

• The area where Tanjung Puting is located has one of the richest floras in the world, and has among the highest

diversity of plants in the world.

• Orangutans have been documented eating over 400 different species of wild foods in this area. Many of these are

fruits people love to eat too!

• Invertebrates, including hundreds of butterfly species, stick and leaf insects, leeches and spiders also add to the

biodiversity of the forest.

• Despite being a protected National Park, almost half (45%) of the park’s primary forest has been damaged by

illegal clearing of rainforests. Even today, and even inside park boundaries, the forest and its animal inhabitants

are not completely safe.

• Tanjung Puting is currently considered a national park. By law, all animals and plants in the park are protected and

it is illegal to log or hunt within its borders.

• To ensure the safety of the park, Orangutan Foundation International (OFI) and the local government, particularly

the Nature Conservation and Forestry Protection branch of the Forestry Department, work together to patrol the

• OFI works with World Education, a community development organization focused on improving quality of life for

villagers in the area around the park. These two organizations work to promote human-wildlife coexistence, in

part by supporting the creation of jobs that are more sustainable than those in the logging and palm oil industries.

How You Can Make a Difference!

illegal human activities, and need to be given a home and

a second chance. The rehabilitation program cares for

Young orangutans are expensive! They eat tons of fruit

(literally) and require the efforts of many caregivers,

including veterinarians. No matter how many orangtuans

are living at the center, OFI never turns away an animal in

Camp Leakey as a research and rehabilitation station in

1971. They played an active role in safeguarding the park,

working together with local government, villagers and the

Forestry Department to stop illegal activities in the Park

and protect its wild orangutan population.

them return to the wild. Your support will allow us to give

Visit our webpage to meet our adorable residents and

choose one to help.

one of the biggest parks in Indonesia, and home to the

largest wild orangutan population. The park is a refuge for

many plants and animals, but even this haven is not always

For orangutans and wildlife to be wild and safe they need

parks is a long and often very difficult process. In the

that can be important refuges for the rich and endangered

wildlife of lowland Borneo. If we do not save these forests,

frequently cross into park borders and carry out their

business illegally,. OFI has over 15 guard posts around the

park, staffed by trained rangers, whose job is to protect the

forest and its inhabitants.

You can donate money to help keep this program going!

they will certainly be bought and transformed into palm

oil plantations, which are not suitable habitat for forest

Be a Rainforest Hero!

Rainforest Action Network’s educational site will help you learn about rainforests, why

they are being cut down, and how you can get involved to help protect them. Discover fun

forest facts, lesson plans for teachers, featured Hero classes, and more. You can also sign up

for our monthly email, Heroes Updates, to learn about new ways to protect rainforests each

Learn About Threats to Rainforests

Believe it or not, one of the biggest threats to rainforests

is the expansion of giant farms for a food ingredient

down lush, biodiverse rainforests, and replace them

rainforest animals like the orangutans in Born to Be Wild

3D! Not only is the rapid growth of palm oil plantations

threatening the world’s remaining tropical forests, but it is

also contributing to mistreatment of local people who live

nearby. Another leading threat to rainforests is logging.

Trees are cut down and turned into everything from

Write a Letter to Decision Makers at Cargill

Since Cargill buys more palm oil than any other company

in the U.S., it can make a big difference by refusing to buy

and sell palm oil that hurts rainforests, family farmers and

our climate. Write a letter to Cargill telling it that you want

a future that includes orangutans, rainforests and a cool

and sell good palm oil that was grown responsibly, without

cutting down rainforests, and with permission from local

people. Then, when we go to the supermarket to buy

cookies or soap, we can know the items in our shopping

Network will collect your letters and deliver them with

letters from students like you, that have come in from

around the world. Or, if you want to let Cargill know how

you feel about the company’s role in forest destruction you

can send an email to Cargill right now at

Please send all letters to:

Palm oil is not the only threat to rainforests and orangutans. Many companies still cut down beautiful forests to make

paper that ends up in American kids books. Visit our Rainforest-Safe Kids’ Books Pocket Guide at

learn more (including our sources for the

facts that are in this booklet)

examples of letters to Cargill from kids 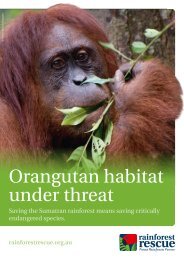