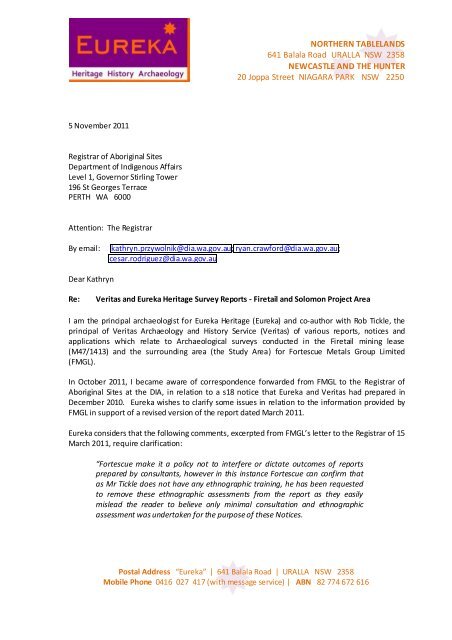 NEWCASTLE AND THE HUNTER

I am the principal archaeologist for Eureka Heritage (Eureka) and co-­‐author with Rob Tickle, the

principal of Veritas Archaeology and History Service (Veritas) of various reports, notices and

In October 2011, I became aware of correspondence forwarded from FMGL to the Registrar of

Aboriginal Sites at the DIA, in relation to a s18 notice that Eureka and Veritas had prepared in

December 2010. Eureka wishes to clarify some issues in relation to the information provided by

FMGL in support of a revised version of the report dated March 2011.

Eureka considers that the following comments, excerpted from FMGLs letter to the Registrar of 15

prepared by consultants, however in this instance Fortescue can confirm that

as Mr Tickle does not have any ethnographic training, he has been requested

to remove these ethnographic assessments from the report as they easily

mislead the reader to believe only minimal consultation and ethnographic

assessment was undertaken for the purpose of these Notices.

ethnographic significance in this spe

Eureka was engaged by FMGL, independently of Veritas, to work collaboratively with Veritas to co-­‐

ordinate and conduct desktop research and field surveys. Information on the identification of

Heritage Act 1972. The purpose of these reports was to provide sufficient information to assist the

Committee (ACMC) in its task of assessing the cultural significance of the Study Area.

In July 2010, at the time of Eurekas engagement by FMGL, , it was agreed that a team of

preparation of anticipated s18 notices and s16 applications during 2011, and to collaborate with

To this end, I sub-­‐contracted colleague Kath Beech to carry out background ethnographic research

purpose of the s18 notice preparation. Kath is a qualified anthropologist and holds a Masters

degree in the field of anthropology and development. In addition, a number of other

archaeologists offered to sub-­‐contract to Eureka in order to fulfill s16 investigative excavation, on-­‐

In December 2010, Veritas and Eureka produced a rep

Report of an Archaeological

review by the Registrar. It is now our understanding that FMGL did not carry out an internal

review of this version of the report prior to its submission to the DIA.

The December 2010 Report, Section 4.3 -­‐ Ethnographic Context, contained the results of

Study Area, and an analysis of the ethnographic work undertaken by anthropologist David Raftery.

This section was compiled and written by Kath Beech, and not Rob Tickle, as stated by FMGL in

their letter of 15 March 2011, Point 10. The Raftery reports to which this section referred were

made available by FMGL on request by Veritas/Eureka. It was our understanding, at the time of

reporting, that there were no further ethnographic reports available or in planning.

belong to the YAC and who are connected to the Study Area. These YAC members claim to hold

reports on consultation with the members of Wirlu-­‐murra

Yindjibarndi Aboriginal Corporation demonstrated that they held little, if any ethnographic

knowledge about the Study Area. Pointing out the deficiencies in consultation was intended to

assist the ACMC in determining any requirement for further ethnographic investigation.

In addition to the DIA guideline requirements for ethnographic enquiry, we considered it our

professional responsibility to ensure that all relevant ethnographic information was documented

and available to the Registrar, and the ACMC, in order that they were best equipped to make a

fully informed decision on the level of significance attached to the Study Area. Part of this

responsibility is to point out information gaps.

On 3 March 2011, Veritas informed Eureka that FMGL had terminated our services as they

them. On 4 March 2011, the Registrar wrote to FMGL regarding the December 2010 notice and

report, expressing a number of issues and concerns to be addressed. I was subsequently advised

December 2010 Report. These requests included the deletion of Section 4.3 Ethnographic

s with this section were expressed in an email to Veritas as:

our understanding of the DIA guidelines);

the section contained opinion and commentary, and this was considered prejudicial to

it was not the role of Veritas/Eureka to report about, comment on or assess the

ethnographic aspects of the study area.

Veritas and Eureka were both very concerned with the request; and at first refused to comply.

However it soon became very clear that, if we did not comply, FMGL would withhold payment of

our previous, outstanding and well overdue invoices on the basis that FMGL could not be expected

to pay for a report that they could not use. At the time there were a number of invoices that were

Having already been dismissed from further work, Eureka considered there was little option other

than to agree to the requested changes. We also considered that the remaining contents of the

report still communicated (although not as explicitly) the issues with the ethnography. The

In addition, FMGL specified that the FMGL Heritage Department would take responsibility for

reporting all sites to the Registrar, as required under s 15 of the Act. However, I am very

submission of both a s16 application and the December s18 notice.

A substantial body of detailed recording, carried out in preparation for s18 notices and s16

applications, was performed by Veritas and Eureka. Due to the discontinuation of our services,

this information has not been reported. FMGL has now engaged other archaeologists to re-­‐survey,

re-­‐record and re-­‐asses areas we surveyed and as a result, I am concerned that the information we

acquired about sites will not be reported, and that this may put Eureka in breach of s 15 of the Act.

As a result of misleading information provided by FMGL, I am also now very concerned that the

that does not accurately reflect the overall significance of the area.

the December 2010 Report is current. The ethnographic content was written by a qualified

anthropologist who was acknowledged in the authorship declaration of the report. At no stage did

FMGL seek to clarify the author of the ethnographic content.

The details of FMGLs letter were not disclosed or known to Eureka until October 2011. Eureka is

property and confidentiality clauses as set out in FMGLs Vendor Agreement.

In light of the above Eureka does not share FMGL

of all areas has been adequately addressedIn fact,

the case may well be that identified

in the course of recent surveys in the Firetail area.

In the course of our consultancy, Veritas and Eureka expressed concerns to FMGL heritage

personnel about the inadequacy of the ethnographic studies and the lack of consultation with YAC.

The Study Area is a rare find; and, as we reported in the December 2010 Report, it has not yet

from our work in the area and which needs to be assessed as a whole.

facilitate its destruction. In this light, I respectfully urge the DIA to inquire further into the levels of

destruction of the resource.

Please note that this letter has been written in consultation and in collaboration with Kath Beech.

As a side note, I would also like to explain that I feel so passionately about this issue that this letter

has been composed on the eve of my wedding day.