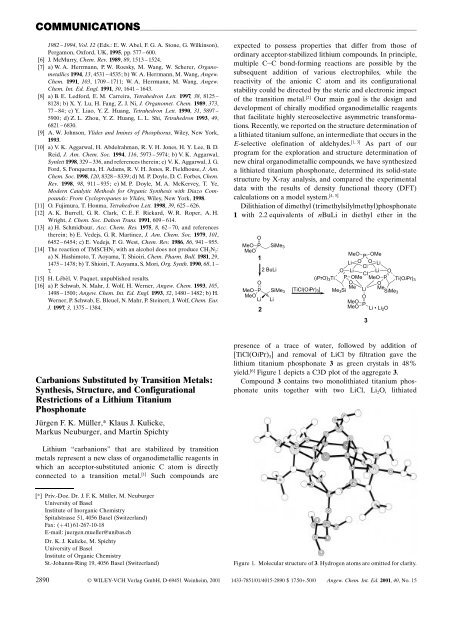 Restrictions of a Lithium Titanium

Lithium ªcarbanionsº that are stabilized by transition

metals represent a new class of organodimetallic reagents in

which an acceptor-substituted anionic C atom is directly

connected to a transition metal. [1] Such compounds are

expected to possess properties that differ from those of

multiple C C bond-forming reactions are possible by the

subsequent addition of various electrophiles, while the

reactivity of the anionic C atom and its configurational

stability could be directed by the steric and electronic impact

of the transition metal. [2] Our main goal is the design and

Recently, we reported on the structure determination of

a lithiated titanium sulfone, an intermediate that occurs in the

program for the exploration and structure determination of

structure by X-ray analysis, and compared the experimental

data with the results of density functional theory (DFT)

calculations on a model system.

1 with 2.2 equivalents of nBuLi in diethyl ether in the

presence of a trace of water, followed by addition of

[TiCl(OiPr) 3] and removal of LiCl by filtration gave the

Figure 1. Molecular structure of 3. Hydrogen atoms are omitted for clarity.

additional bridging ligands. The center of the aggregate is an

nucleus for crystallization. [1] Each terminal phosphonate

oxygen atom bridges two lithium atoms of this ring. The

coordinate to an external Li cation, and together with an

they result in a distorted square-pyramidal coordination

sphere. The phosphonate unit itself is characterized by a

P Li bond and the complexation of a Li 2O molecule. The

presence of Li 2O is crucial for the crystallization of 3. We were

unable to grow suitable crystals of 3 in the absence of H 2O;

however, the strong disorder of the Li 2O molecules caused a

moderate quality of the crystal structure analysis. [4] The eightmembered

very similar to that in a lithium titanium sulfone. [1] The

titanated anionic C a atom has an essentially planar coordination

contacts, as is typical for monolithiated phosphonates. [7]

perpendicular to the P-C-Ti plane, an ideal orientation for

stabilizing hyperconjugative interaction of the lone-pair

orbital with the s* orbitals of the P O(phosphate ester)

bonds [n C ± s*(PO)]. The Ti atoms are pentacoordinate with a

positions are occupied by two 2-propanolate O atoms and

the C a atom. The oxygen atom of the remaining 2-propanolate

group and the phosphonate oxygen atom occupy the axial

bond length in 3 of 2.01 Š is intermediate between normal

Ti C single bonds, as in a related titanated sulfone

of the titanium atom by the terminal phosphonate

[D 8]THF to gain some information on the solution structure

of 3. Whereas the 1 H NMR spectrum showed only very broad

chemical shift on metalation. The most dramatic effect was

observed for the C a signal, which shifted downfield to d ˆ

C a carbon of a monotitanated sulfone is d ˆ 52.4, in contrast to

23 Hz in the J(C,P) coupling constant is a strong indication for

aC a atom with sp 2 character. We therefore conclude that a

responsible for the large downfield shift. The 31 P NMR

conclusions about the state of aggregation in solution, but it is

To obtain deeper insight into the structure of 3, we carried

structure agrees very well with the X-ray crystal structure of 3:

ring represents a minimum on the potential energy surface.

are marginally longer than in the solid state. Especially the

of the anionic charge by the titanium atom. The angles

state. Our special focus lies on the configurational stability of

anions of type 5, the interaction of the C a

crucial for the configurational stability: it increases the energy

barrier for rotation about the C a P bond. [7] However, the

barrier is only 6 ± 8 kcal mol 1 , which is insufficient to prevent

rotation, even at low temperature. Hence, the question arises

to what extent the additional chelation of the titanium atom

by the phosphonate oxygen atom in 3 enhances the configurational

stability. Therefore, we calculated the energy profile of

the rotation around the C a P bond in 4 (Figure 2), starting at

the maximum 4B, about 6.5 kcal mol 1 higher in energy than

4A. Further rotation yields the two minima 4C and 4D, both

about 4 kcal mol 1 less stable than 4A. According to this

profile, a substantial increase of the configurational stability

of 3 relative to phosphoryl-stabilized lithium carbanions

cannot be expected. A reason for this might be the competing

interaction of the empty titanium valence shell orbitals with

the C a lone-pair orbital, which is also consistent with the short

We have described a new general route to heterodimetallic

sequence. The resulting intermediate 3 can be regarded as a

as a chemo- and stereoselective bis-electrophile in C C

metals such as zinc or copper to induce higher configurational

Figure 2. Energy profile for rotation about the C a P bond in 4.

diethyl ether (2 mL). After filtration of the turbid solution, the remaining

of 3 were attached to a glass fiber with perfluoropolyether, mounted

on the diffractometer, and cooled with an Oxford Cryostream to

equipped with a graphite monochromator. The usual corrections were

applied. The structure was solved by direct methods with the program

out on all non-hydrogen atoms by using the program CRYSTALS. [12]

The positions of the hydrogen atoms were determined geometrically.

The disordered Li 2O molecules in 3 were refined with appropriate

restraints. Chebychev polynomial weights were used to complete the

refinement. [13] Scattering factors were taken from the International

factors) for the structure reported in this paper have been deposited

with the Cambridge Crystallographic Data Centre as supplementary

publication no. CCDC-156555. Copies of the data can be obtained free

of charge on application to CCDC, 12 Union Road, Cambridge

factors of Raghavachari and Trucks for first-row transition metals [18]

and with additional diffuse (s,p,d) and polarization (f) functions

the standard basis set 6-31G(d) was used. Initial coordinates for the

geometry optimization of 4 were obtained by extracting the coordinates

of 3 (without Li ‡ ions) from the crystal structure and replacing

the isopropyl groups by methyl groups. The optimized geometry of 4

reoptimized while keeping g constrained. The electronic energies of

these optimized rotamers revealed the rotation profile. All calculations

were carried out with the program package Gaussian 98. [19]

Molecules in Elementary Steps of the Fenton

The proposed reaction mechanisms for the oxidation of

organic substrates with the Fenton reagents (a mixture of

ferrous ions and hydrogen peroxide) can roughly be divided

into two groups. The first group regards Fenton chemistry as

the production of free hydroxyl radicals by the metalcatalyzed

decomposition of the peroxide, [1] whereas the

second group involves the formation of a highly reactive

oxidative intermediate. [2] The issue is clearly of interest for

both biooxidation research, in view of the prominent role of

Fe ions, and for oxidation catalysis in general. However,

despite the numerous studies over more than 60 years, [3±10] the

controversy remains, since the extremely short lifetimes of the

that the water solvent has to be included in the study. Not only

are the Fe 2‡ ions coordinated by six water molecules, but

conceivable reaction products such as OH ,H ‡ , and OH . will

also be solvated and/or propagate through the solution by

chain reactions. It is therefore impossible to treat the solvent

by just model potentials that describe interactions between

(let alone by a continuum model).

The explicit incorporation of the water solvent in the

computational study is no longer an elusive goal. Indeed, the

[**] We gratefully acknowledge the helpful discussions with Michiel

Gribnau (Unilever-Vlaardingen) and we thank the Netherlands

Organization for Scientific Research (NWO) for support through

the PPM-CMS program and the NCF for providing computer time.

parameter free, finite temperature simulation in which, at

each time step, the forces are computed directly from the

(DFT). Therefore, within this approach there are no restrictions

on reactive processes at the Fe center or in the solution.

Recently, we performed DFT calculations on the isolated

(gas-phase) Fenton reactants, [12] and found that dissociation of

the O O bond of hydrogen peroxide molecule coordinated to

cannot readily occur since this reaction is endothermic by

27 kcal mol 1 . This value is in fact already smaller than the

isolated hydrogen peroxide. The reduction of the dissociation

energy occurs because the OH . that remains coordinated to

the original Fe II H 2O 2 bond. Nevertheless, there is still an

endothermicity of 27 kcal mol 1 , and homolytic dissociation of

the coordinated H 2O 2 molecule can only become exothermic

through the energy gain associated with a second Fe OH

occurs in the gas phase by the leaving OH . abstracting a

A water molecule and a second strong Fe OH bond is

formed, and this process provides enough energy to make the

We now turn to the study of this reaction in solution. We

had already observed in the gas phase that a single water

molecule, when added in a ªsecond solvation shellº position,

an H 2O molecule. The energy barrier for this transformation

would be too high without the chemical involvement

is necessary since solvent molecules may be chemically

involved in the formation of the ferryl ion. Moreover,

they may be involved in the alternative pathway of OH .

formation, since solvent molecules may react with the OH .

and propagate it through the solution by a chain reaction.

molecules to emulate the infinite bulk environment but keep

the computation feasible. The formal concentration of the

reactants is therefore high but not unrealistic (technical

details of AIMD simulations of solvation and (radical)

previous study of the S N2 reaction in water, [17] namely, a 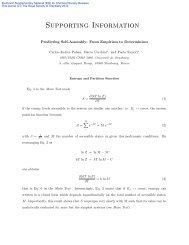 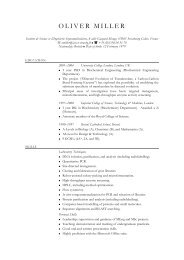 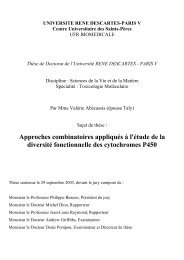 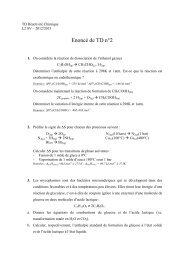 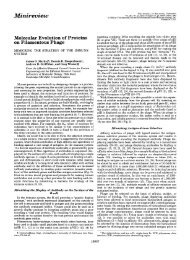 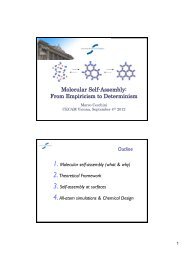 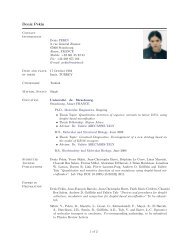 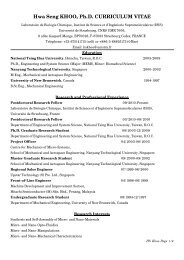 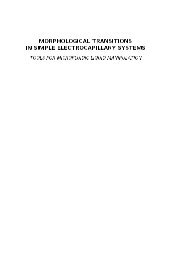