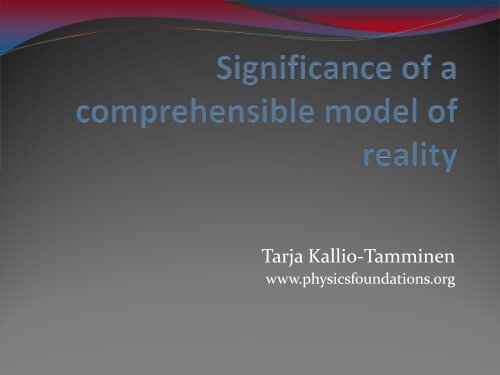 where we are, what can be done

where we live, what can be done

Fundamental metaphysical presuppositions are in change

where we are, what can be done

Fundamental metaphysical presuppositions are in change

The historical process is guided by natural

Both are important for understanding the nature of reality

Antiquity: Reality is comparable to an organism

‐the whole includes a soul and is able to regulate itself

‐the constitution of the whole is reflected in humans

Reality consist of matter in motion

‐you cannot find a soul

Reality is comparable to a clockwork

mechanical, quantitative, and without purpose

or kinetic energy are

but depend on the

What is the basic stuff everything is made of?

What is the relation between the parts and the whole?

What is the role and locus of humans?

-their truth can be falsified but never conclusively verified

Logic and mathematics are indispensable tools but they do not

-and theories cannot be understood without a conceptual interpretation

the growth in physical understanding of reality has

characteristically been related to achieving a proper

‐clarification of the basic principles and notions leads to

further knowledge on the interrelations between the relevant

and the same mathematical formalism.

A proper view into nature most probably demands a

framework unifying the quantum theory and the theory

‐ a suitable formalism cannot start from the existing

The parts are governed by the whole

‐adds the idea of open evolution to the present postulates (QM,RT)

Everything consist of energy naturally dispersing from higher

densities to lower ones by using the steepest available paths.

‐closed and open actions, mass converts into energy in radiation

A covering new framework with a minimal amount of postulates.

Reveals an unexpected link between mass, energy, motion and

‐ mass is a fundamental invariant which links everything together into

‐ localized objects are described in terms of resonant mass‐wave

Re‐establishes the universal frame of reference

Gives a comprehensible model of the constitution and evolution of

Generated by closed and

The universe seems to be an active, hierarchically

(reminiscent to an organism rather than a clockwork)

who nevertheless always remain subordinate to the

balanced action of the whole.