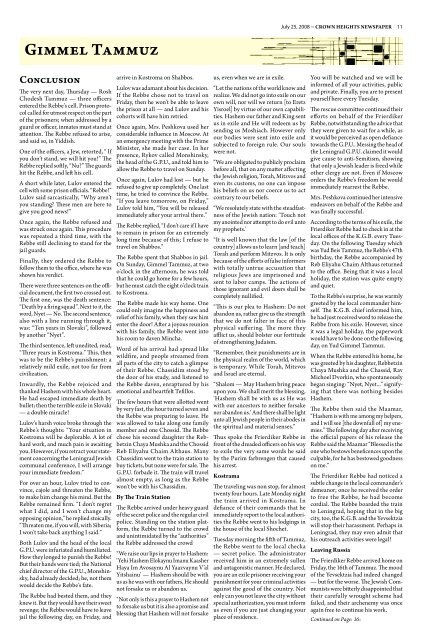 The very next day, Thursday — Rosh

called for utmost respect on the part

of the prisoners; when addressed by a

guard or officer, inmates must stand at

attention. The Rebbe refused to arise,

and said so, in yiddish.

One of the officers, a Jew, retorted, “ if

you don’t stand, we will hit you!” The

hit the Rebbe, and left his cell.

a short while later, lulov entered the

cell with some prison officials. “Rebbe!”

you standing? These men are here to

give you good news!”

Once again, the Rebbe refused and

was struck once again. This procedure

was repeated a third time, with the

Rebbe still declining to stand for the

Finally, they ordered the Rebbe to

There were three sentences on the official

document, the first two crossed out.

The first one, was the death sen tence:

“Death by a firing squad”. Next to it, the

word, Nyet — No. The second sentence,

also with a line running through it,

was: “Ten years in Slovaki”, followed

“Three years in kostroma.” This, then

was to be the Rebbe’s punishment: a

relatively mild exile, not too far from

inwardly, the Rebbe rejoiced and

thanked Hashem with his whole heart.

He had escaped immediate death by

bullet; then the terrible exile in Slovaki

lulov’s harsh voice broke through the

Rebbe’s thoughts: “your situation in

kostroma will be deplorable. a lot of

hard work, and much pain is awaiting

you. However, if you retract your statement

communal conference, i will arrange

For over an hour, lulov tried to convince,

cajole and threaten the Rebbe,

to make him change his mind. But the

what i did, and i won’t change my

“Threaten me, if you will, with Siberia;

i won’t take back anything i said.”

Both lulov and the head of the local

How they longed to punish the Rebbe!

But their hands were tied; the National

had already decided; he, not them

would decide the Rebbe’s fate.

The Rebbe had bested them, and they

knew it. But they would have their sweet

revenge; the Rebbe would have to leave

jail the following day, on Friday, and

arrive in kos troma on Shabbos.

lulov was adamant about his decision.

if the Rebbe chose not to travel on

Friday, then he won’t be able to leave

the prison at all — and lulov and his

cohorts will have him retried.

Once again, mrs. Peshkova used her

considerable influ ence in moscow. at

an emergency meeting with the Prime

minister, she made her case. in her

allow the Rebbe to travel on Sunday.

Once again, lulov had lost — but he

refused to give up completely. One last

time, he tried to convince the Rebbe.

“if you leave tomorrow, on Friday,”

lulov told him, “you will be released

immediately after your arrival there.”

The Rebbe replied, “i don’t care if i have

to remain in prison for an extremely

long time because of this; i refuse to

The Rebbe spent that Shabbos in jail.

On Sunday, Gimmel Tammuz, at two

o’clock in the afternoon, he was told

that he could go home for a few hours,

but he must catch the eight o’clock train

The Rebbe made his way home. One

could only imagine the happiness and

relief of his family, when they saw him

enter the door! after a joyous reunion

with his family, the Rebbe went into

his room to daven mincha.

wildfire, and people streamed from

all parts of the city to catch a glimpse

of their Rebbe. Chassidim stood by

the door of his study, and lis tened to

the Rebbe daven, enraptured by his

The few hours that were allotted went

by very fast, the hour turned seven and

the Rebbe was preparing to leave. He

was allowed to take along one family

member and one Chossid. The Rebbe

chose his second daughter the Rebbetzin

Chaya mushka and the Chossid

Chassidim went to the train station to

buy tickets, but none were for sale. The

G.P.u. forbade it. The train will travel

almost empty, as long as the Rebbe

won’t be with his Chassidim.

By The Train Station

The Rebbe arrived under heavy guard

of the secret police and the regular civil

police. Standing on the station platform,

the Rebbe turned to the crowd

and unintimidated by the “authorities”

the Rebbe addressed the crowd

“we raise our lips in prayer to Hashem:

yitshainu’ — Hashem should be with

us as he was with our fathers, He should

not forsake us or abandon us.

“Not only is this a prayer to Hashem not

to forsake us but it is also a promise and

blessing that Hashem will not forsake

us, even when we are in exile.

“let the nations of the world know and

realize. we did not go into exile on our

own will, nor will we return [to eretz

yisroel] by vir tue of our own capabilities.

Hashem our father and king sent

us in exile and He will redeem us by

sending us moshiach. However only

our bodies were sent into exile and

subjected to foreign rule. Our souls

“we are obligated to publicly proclaim

before all, that on any matter affecting

the Jewish religion, Torah, mitzvos and

even its customs, no one can impose

his beliefs on us nor coerce us to act

contrary to our beliefs.

“we resolutely state with the steadfastness

of the Jewish nation: ‘Touch not

my anointed nor attempt to do evil unto

“it is well known that the law [of the

country] allows us to learn [and teach]

Torah and perform mitzvos. it is only

because of the efforts of false informers

with totally untrue accusation that

religious Jews are imprisoned and

sent to labor camps. The actions of

those ignorant and evil doers shall be

“This is our plea to Hashem: Do not

abandon us, rather give us the strength

that we do not falter in face of this

physical suffering. The more they

afflict us, should bolster our fortitude

“Remember, their punishments are in

the physical realm of the world, which

is temporary. while Torah, mitzvos

and israel are eternal.

upon you. we shall merit the blessing,

‘Hashem shall be with us as He was

with our ancestors to neither forsake

nor abandon us.’ and there shall be light

unto all Jewish people in their abodes in

the spiritual and material senses.”

Thus spoke the Frierdiker Rebbe in

front of the dreaded officers on his way

to exile the very same words he said

by the Purim farbrengen that caused

The traveling was non stop, for almost

the train arrived in kostrama. in

defiance of their commands that he

immediately report to the local authorities

the Rebbe went to his lodgings in

the house of the local Shochet.

Tuesday morning the fifth of Tammuz,

the Rebbe went to the local checka

received him in an extremely sullen

and antagonistic manner. He declared,

you are an exile prisoner receiving your

punishment for your criminal activities

against the good of the country. Not

only can you not leave the city without

special authori zation, you must inform

us even if you are just changing your

you will be watched and we will be

informed of all your activities, public

and private. Finally, you are to present

your self here every Tuesday.

The rescue committee continued their

efforts on behalf of the Frierdiker

Rebbe, notwithstanding the advice that

they were given to wait for a while, as

it would be perceived as open defiance

towards the G.P.u.. messing the head of

the leningrad G.P.u. claimed it would

that only a Jewish leader is freed while

other clergy are not. even if moscow

orders the Rebbe’s free dom he would

endeavors on behalf of the Rebbe and

Frierdiker Rebbe had to check in at the

local offices of the k.G.B. every Tuesday.

On the following Tuesday which

birthday, the Rebbe accompanied by

to the office. Being that it was a local

holi day, the station was quite empty

To the Rebbe’s surprise, he was warmly

greeted by the local commander himself.

The k.G.B. chief informed him,

he had just received word to release the

Rebbe from his exile. However, since

it was a legal holiday, the paperwork

would have to be done on the following

when the Rebbe entered his home, he

was greeted by his daughter, Rebbetzin

Chaya mushka and the Chassid, Rav

that there was nothing besides

The Rebbe then said the maamar,

“Hashem is with me among my helpers,

and i will see [the downfall of] my enemies.”

The following day after receiving

the official papers of his release the

Rebbe said the maamar “Blessed is the

one who bestows beneficences upon the

culpable, for he has bestowed goodness

The Frierdiker Rebbe had noticed a

subtle change in the local commander’s

demeanor; once he received the order

to free the Rebbe, he had become

cordial. The Rebbe boarded the train

to leningrad, hoping that in the big

city, too, the k.G.B. and the yevsektzia

will stop their harassment. Perhaps in

leningrad, they may even admit that

his outreach activi ties were legal!

The Frierdiker Rebbe arrived home on

Friday, the 16th of Tammuz. The mood

of the yevsektzia had indeed changed

— but for the worse. The Jewish Communists

were bitterly dis appointed that

their carefully wrought scheme had

failed, and their archenemy was once

again free to continue his work. 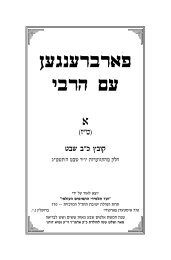 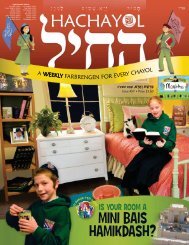 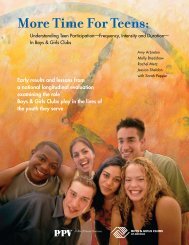 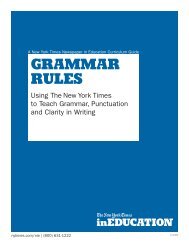 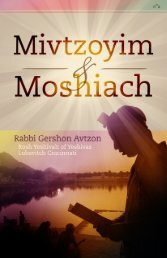 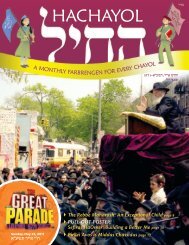 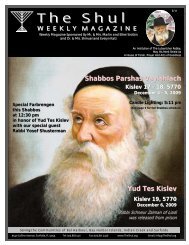 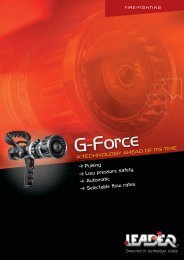 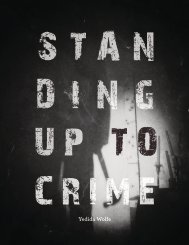 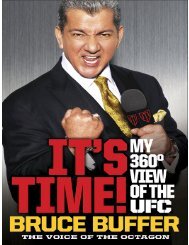 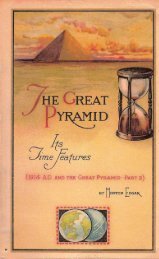 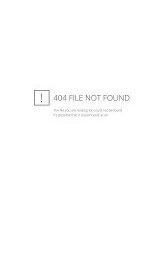 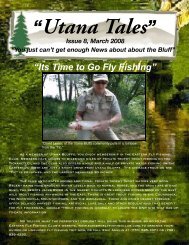 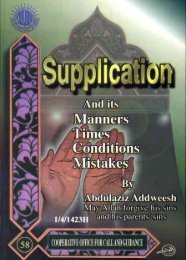 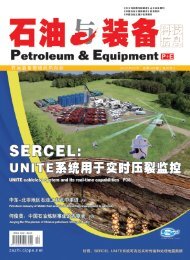 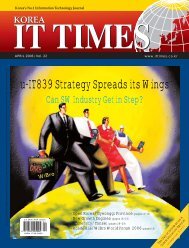