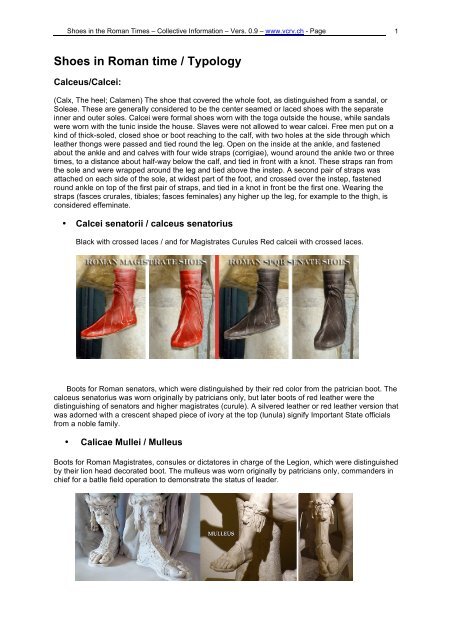 (Calx, The heel; Calamen) The shoe that covered the whole foot, as distinguished from a sandal, or

Soleae. These are generally considered to be the center seamed or laced shoes with the separate

inner and outer soles. Calcei were formal shoes worn with the toga outside the house, while sandals

were worn with the tunic inside the house. Slaves were not allowed to wear calcei. Free men put on a

kind of thick-soled, closed shoe or boot reaching to the calf, with two holes at the side through which

leather thongs were passed and tied round the leg. Open on the inside at the ankle, and fastened

about the ankle and and calves with four wide straps (corrigiae), wound around the ankle two or three

times, to a distance about half-way below the calf, and tied in front with a knot. These straps ran from

the sole and were wrapped around the leg and tied above the instep. A second pair of straps was

attached on each side of the sole, at widest part of the foot, and crossed over the instep, fastened

round ankle on top of the first pair of straps, and tied in a knot in front be the first one. Wearing the

straps (fasces crurales, tibiales; fasces feminales) any higher up the leg, for example to the thigh, is

Boots for Roman senators, which were distinguished by their red color from the patrician boot. The

calceus senatorius was worn originally by patricians only, but later boots of red leather were the

distinguishing of senators and higher magistrates (curule). A silvered leather or red leather version that

from a noble family.

Boots for Roman Magistrates, consules or dictatores in charge of the Legion, which were distinguished

by their lion head decorated boot. The mulleus was worn originally by patricians only, commanders in

chief for a batlle field operation to demonstrate the status of leader.

Shoes differentiated in the Edict of Diocletian from the Calcei senatorii.

Diocletian). They were hound to the leg with four thongs (corrigiae), two on each side attached

between the sole and the uppers, front and back. The thongs tied around the upper ankle and the

middle of the leg. Patricians wore the sole part in untanned leather and the four straps in black.

Women wore boots like the men's, but made of thinner, softer, leather, in a bright variety of colors,

often in white, and decorated with precious stones and pearls. Sometimes, in place of straps, narrow

bands of coloured silk were used to tie on the boots.

A small shoe, or half boots, usually for women.

Pointed-toed shoes, curving upward at the toe, that were worn by Etruscans in the sixth century

B.C. These, in theory, were the model for the later Roman senatorial calcei with lacing and straps.

Cicero says that only statues of Juno Sospita continued to use the pointed-toe calcei repandi, but a

rounded-toe version may have been in use as late as the third century A.D.

A type of Calcei, with a single piece upper and a separate inner and outer sole.

ankles and the foot in a web of leather. They sometimes appear to have been worn so that the upper

edge could be turned down.

There seem to have been a variety of nailpatterns

in the soles. Caligae are also referred to

in the Edict of Diocletian as "boots for mule

hobnails." Note that after about 100 CE, these

boots seem to disappear from the archaeological

Boots for women, similar to those worn by soldiers, but without hobnails. Caligae muliebres

cost only 60 sesterces in the Edict, but those for soldiers, without nails, cost 100 sesterces.

A shoe, similar to that of the soldiers, worn by emperors in the late empire (e.g., Maximinus

and Gallienus) and by Byzantine emperors.

These sandals are merely simple soles, sometimes hobnailed, of leather or matting attached to the

feet by a thong between the toes or with a few thongs of leather tied round the ankle. They were worn

with a tunic when it was not covered by an outer garment; customarily their use was limited to the

house. It was not considered suitable for a man to go out in sandals. Sandals were not worn at meals;

host and guests wore them into the dining room, but as soon as the men took their places on the

couches, slaves removed the sandals and kept them until the meal was over. The phrase soleas

A phrase describing the high platform shoe of the actor.

An oxhide sandal for women which could be made single- or double-soled, according to the Edict

A sandal made from vegetable fibers, leaves, and so forth.

Sources / where to buy: