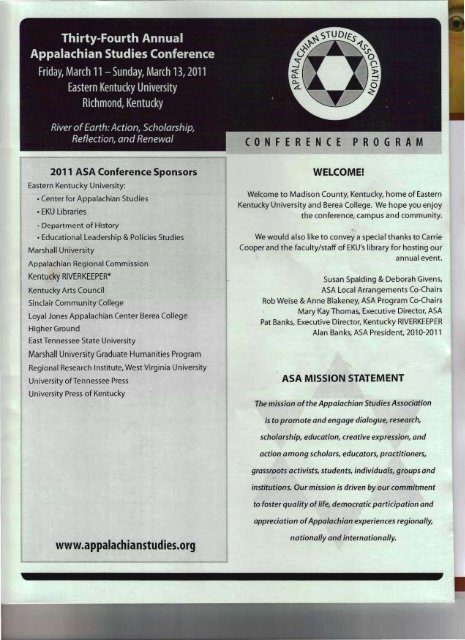 Kentucky University and Berea College. We hope you enjoy

the conference, campus and community.

We would also like to convey a special thanks to Carrie

Cooper and the faculty/staff of EKU's library for hosting our

is to promote and engage dialogue, research,

institutions. Our mission is driven by our commitment

a performance by the Carolina Chocolate Drops

Self-guided history and arts tours of Richmond and Madison County

Lunch on your own

Ledford with remarks by Loyal Jones and

The University Press of Kentucky.

Mall on the Eastern Bypass

CONFERENCE AT A GLANCE

Room, sponsored by the University of

Tennessee Press and the University Press

GLBTQ networking gathering at the

DINNER ON YOUR OWN

Gallery, Restaurant, and Bar hop in

with the Reel World String Band and caller

Open Jam at Gillum's, in the old Richmond

Mall on the Eastern Bypass

Farewell Brunch and invitation to 2012

Room. Music by Hazard Community and

The Steering Committee is made up ofall elected and appointed officers,

the immediate past president, six elected at large members, and ex officio

officers. In addition to officers and members ofthe steering commillee,

the chairs and members ofstanding and ad hoc committees are also

Many thanks to Pat Banks (Director, Kentucky RIVERKEEPER), Donna

Susan Spalding (Local Arrangements Co-Chairs) and many others in

Appalachian Center, The University of Kentucky

PRISM, A Journal for Regional Engagement

Kentuckians for the Commonwealth

The Alliance for Appalachia

Wireless internet access will be available for conference attendees in

the Keen Johnson building and the Crabbe Library. From these areas

For Presenters, EKU offers support in the session rooms for Windows

XP and Office 2007, including an LCD projector. Depending on room

availability, we may ask some presenters to bring their own laptop

computers that we can hook into the projector. All presenters should

bring their presentations on mobile media, preferably a USB drive.

Additional presenting information will be communicated via email

directly to presenters by the Program Committee Chairs.

There are two copiers on the main floor of the Crabbe Library. The

charge is 10 cents per page.

v1arch 12. Reception sponsored by University of Tennessee Press and

Open jams on both Friday and Saturday nights beginning at 8:30PM at

Gillum's Sports Lounge on the Eastern Bypass. Hours of good music in

an easily accessible room with food and drink available close by.

on Saturday, March 12, sponsored by local businesses. Ask for ASA

Rich Kirby and others.

Community venues are "on your own"; many will be free or heavily

discounted. Just ask for the conference special. Details and logistics

will be available at the information table next to the registration site.

WHERE ASA ACTIVITIES WILL OCCUR ON CAMPUS

Crabbe Library - Registration and Information are in the main lobby

of the library between the circulation desk and the elevators. The

the main floor beyond and to the right of the Circulation area, in the

Reference section. Receptions are held in the Grand Reading room on

Crabbe Library - Concurrent sessions will be held in rooms 108 and

level; Government Documents one floor up, and 3100, on the upper

level of the Noel Studio.

Combs Classroom Building - the Plenary Session is in the Ferrell

Auditorium; concurrent sessions are in rooms 114 and 116.

Keen Johnson Building - Receptions are in the Walnut Room on the

place in the Ballroom on the second floor.

Please make several visits to the exhibit area where publishers will

display recent Appalachian books and other writings. A variety of

programs and organizations will have displays and information

available about their activities and services.

Be sure to visit these during the conference. Poster presenters will be

in the main level of the Noel Studio, in the Crabbe Library, on Friday,

their programs and projects.

"Into the Crucible: The Chesapeake and Ohio Railroad and the Black

"A Bucket of Peaches: Race Relations, Sharecropping, and Mob

"The Architectural Evolution of a Coal Mining Company Town;' Stacey

"The Pi Beta Phi Settlement School and the Boundaries of Progressive

Reform in the Mountain South;' Shirley Robinson, University of

"Beginning With Jerusalem in the Regions Beyond: Edward O.

Guerrant and the Home Mission Movement to Appalachia;' Caroline

"'From log-cabin to Greek portico' and Beyond: Bildung as Cultural

"Stories Old and New: Appalachia in the Short Fiction of Lee Smith,"

"Home is Where the Corazon Is: English Language Learners in the Rural

"The Impact of Poor Attendance on Achievement;' Erin Bushek,

"Taking the Bluegrass North: The Renfro Valley Barn Dance a

Perceptions of Appalachia in Cincinnati," Nathan McGee. U

"Harry Caudill's Night Comes to the Cumberlands: What Do e

with the Stereotypes?" Donna Eisenstat, West Virginia Institu to :

"Cultural Attitudes About Mental Health Services in Appala a

"New Town: Acknowledging a Past, Discovering the Future," Yunina

"Discursive Constructions of , Place' in NewTown and Wake Fore

"The Paradoxes of Heirloom Seed-saving, or: ReconSidering Class,

the Role of the State in Eastern Kentucky's Craft Industry;' Amanda

'Farewell to Summer': Examining the Role and Value of the Commons

in Appalachian Economies;' Paul Lovelace, University of Kentucky, and

"Get Out of Here: Coming Out in Appalachia;' Ann Andaloro, Morehead

-Joseph Sargent Hall: The Man and his 'Song-Catching';' Michael

"The Old-Time Musical Repertoire of the Smoky Mountains;'

'A Window into the Emotional World of Appalachian Men: Grief, Loss,

and Coping in One Group of Men in Eastern Kentucky;' Ruth Riding­

' Who Am I and Where do I Come From? Developing an Appalachian

"The African-American Experience in Eastern Kentucky - the Oral

"Implementation and response to Small-Scale Wind Power in

a Southern Appalachian Community: The Case of Boone, NC'

"The Effects of Coal on the Health of People in Central Appalachia:

by the University Press of Kentucky, Keen Johnson Building, Walnut

and a chance for students from all schools to get to know each other.

on the Eastern Bypass

"Get on Board, Children: The Story of Integration in Yancey County,

"The Socioeconomic and Health Status of Black Appalachian Migrants

in the Cincinnati Metropolitan Area;' Robert Ludke, University of

Sat. 9:00. 35. Modernization and the Ozarks: Perspectives on the

'''As Fixed and Stable as the Rocks Themselves': Highland South

Stereotypes and Early School Reform in the Arkansas Ozarks, 191 Os

Williamson's The Woods Colt: A Novel of the Ozarks Mountains (1933),"

"Whose Forest is It?: Resistance to the Arkansas National Forest," J. Brett

"Persistence and Change in the Ozarks and Ouachitas: An Overview;'

Jal "Mentor Musician Jim Lloyd & the Journey of His Apprentice,"Trevor

"The School on the Hill: An Oral History of Nelson-Merry School" (video

"Saving Price Public and the Creation of the Swift College Museum;'

"The Journey to AAHA!" Gwen Valentine and Roverta Russaw, African

Kentucky: Segmentation of the Prevention Social World in Two Area

"'I know what I look like': Far Southwest Virginians Reflect on their

Arizona and The Healthy Appalachia Institute, University of

"'We're going to talk about it': A qualitative analysis of family

"Forming a Community of Dance: The West Virginia Dance Fes·

"Reading the Appalachian City: New Cultural History and the c..

Sat. 1 :30.64. Are We Incorrectly Imposing Outside Standar

Ray Hazlett. Deputy Auditor of the City of Athens, Ohio

Sat. 1:30.65. Learning the Environment: Putting Together an

"West Virginia History On View: 40,000 Images at Your Fingertips,

'''Out Your Way': Providing Access to Appalachia's Past by Re-Mast

GLBTQ networking gathering at the EKU-SAFE Center and Healing

Richmond Mall on the Eastern Bypass

"No More 'Wiggle-Tail Water': The Development of a Public Water

"Children of the Rail;' Patricia Jacobs, Virginia Polytechnic and State

and the People it Displaced," Julia Lewis, Blue Ridge Community

Fulbright. Graduate Center of the City University of New York

and State University, and Stephanie Martin, Virginia Polytechnic and

"Power Play: Considering Discourse in the World of Bluegrass Music,"

"Life Between the Rivers: My Mesopotamia," Rebecca Mobbs, Ocoee,

"I Am Reduced, Then, to the Son: A Reading of George Scarbrough's

"'Walking the Paths of His Own Premise': The Quest for Home in

as Education in and for Democracy: Listening to Our Learners.

"Silas House's The Hurting Part': From Family Story to the Stage," Anita

'''There's Gonna Be Hell to Pay': Staging Appalachia in New York with

"The Coal Mine Safety Act, Legacy of Massey Energy, and Federal

Munn, Coal River Mountain Watch; Beverly May, Kentuckians for the

"Ginseng: Gold in the Ground for Generations of Mountain Folk;'

"A Sense of Place: Elements of the Natural World as Regional

Identification. Appalachia on the Covers of Local Color Literature,"

Diseases, and Insects are Reducing Ecological Diversity and Traditional

"Victory Gardens and Munitions From the Old Red Scar: The Chemicals

Industry in the Ducktown Basin During WWII;'Wiliiam Simson, Georgia

of Berea College Center for Excellence in Learning Thro

"'Native' Missionaries: An Exploration of the Independent B

"Better Felt than Researched: Past Trajectories and Future p(

for the Study of Religion in Appalachia," Stephen Lawson, E(

"For the Love of Learning: The Life of Pioneering Folklorist E