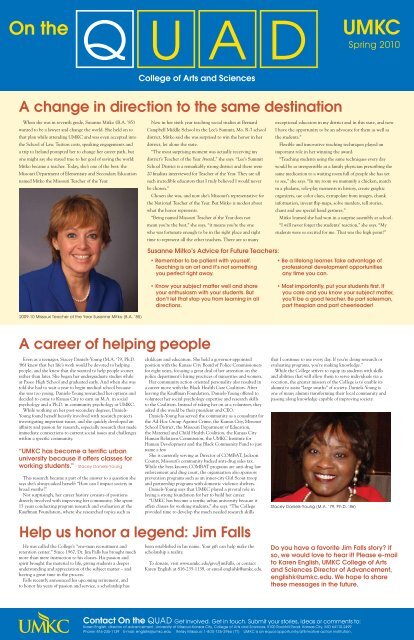 A career of helping people A change in direction to the same ...

A career of helping people A change in direction to the same ...

wanted to be a lawyer and change the world. She held on to

that plan while attending UMKC and was even accepted into

the School of Law. Tuition costs, speaking engagements and

a trip to Ireland prompted her to change her career path, but

one might say she stayed true to her goal of saving the world:

Mitko became a teacher. Today, she’s one of the best: the

named Mitko the Missouri Teacher of the Year.

people, and she knew that she wanted to help people sooner

rather than later. She began her undergraduate studies while

at Paseo High School and graduated early. And when she was

she was too young, Daniels-Young researched her options and

decided to come to Kansas City to earn an M.A. in social

While working on her post-secondary degrees, Daniels-

investigating important issues, and she quickly developed an

affinity and passion for research, especially research that made

within a specific community.

says she’s always asked herself: “How can I impact society in

Not surprisingly, her career history consists of positions

directly involved with improving her community. She spent

15 years conducting program research and evaluation at the

Kauffman Foundation, where she researched topics such as

A change in direction to the same destination

A career of helping people

“UMKC has become a terrific urban

university because it offers classes for

Now in her sixth year teaching social studies at Bernard

district, Mitko said she was surprised to win the honor in her

“The most surprising moment was actually receiving my

district’s Teacher of the Year Award,” she says. “Lee’s Summit

School District is a remarkably strong district and there were

20 finalists interviewed for Teacher of the Year. They are all

such incredible educators that I truly believed I would never

Chosen she was, and now she’s Missouri’s representative for

the National Teacher of the Year. But Mitko is modest about

what the honor represents.

“Being named Missouri Teacher of the Year does not

time to represent all the other teachers. There are so many

• Remember to be patient with yourself.

Teaching is an art and it’s not something

you perfect right away.

your enthusiasm with your students. But

don’t let that stop you from learning in all

childcare and education. She held a governor-appointed

position with the Kansas City Board of Police Commissioners

for eight years, focusing a great deal of her attention on the

a career move with the Black Health Care Coalition. After

to the Coalition. Instead of taking her on as a volunteer, they

asked if she would be their president and CEO.

Daniels-Young has served the community as a consultant for

the Ad-Hoc Group Against Crime, the Kansas City, Missouri

the Maternal and Child Health Coalition, the Kansas City

Human Development and the Black Community Fund to just

She is currently serving as Director of COMBAT, Jackson

While the best-known COMBAT programs are anti-drug law

prevention programs such as an inner-city Girl Scout troop

Daniels-Young says that UMKC played a pivotal role in

laying a strong foundation for her to build her career.

“UMKC has become a terrific urban university because it

offers classes for working students,” she says. “The College

provided time to develop the much needed research skills

He was called the College’s “one-man recruitment and

retention center.” Since 1967, Dr. Jim Falls has brought much

more than mere instruction to his classes. His passion and

spirit brought the material to life, giving students a deeper

understanding and appreciation of the subject matter – and

having a great time in the process.

to honor his years of passion and service, a scholarship has

been established in his name. Your gift can help make the

Contact On the Quad Get involved. Get in touch. Submit your stories, ideas or comments to:

exceptional educators in my district and in this state, and now

important role in her winning the award.

would be as irresponsible as a family physician prescribing the

to see,” she says. “In my room we mummify a chicken, march

in a phalanx, role-play moments in history, create graphic

chant and use special hand gestures.”

Mitko learned she had won in a surprise assembly at school.

“I will never forget the students’ reaction,” she says. “My

students were so excited for me. That was the high point!”

• Be a lifelong learner. Take advantage of

any time you can.

• Most importantly, put your students first. If

you care and you know your subject matter,

you’ll be a good teacher. Be part salesman,

that I continue to use every day. If you’re doing research or

While the College strives to equip its students with skills

and abilities that will allow them to serve individuals via a

vocation, the greater mission of the College is to enable its

alumni to assist “large swaths” of society. Daniels-Young is

one of many alumni transforming their local community and

Do you have a favorite Jim Falls story? If

so, we would love to hear it! Please e-mail

and Sciences Director of Advancement,

these messages in the future.

One of the goals of

UMKC and the College

of Arts of Sciences is

to provide our students

with the best education

possible. Our faculty are

developing new ones and

teaching with the best

upgraded to ensure they

remain relevant and give our students the best educational

courses. While we still firmly believe in in-classroom

instruction, we know that many of our students benefit from

having more flexible options in order to earn their degrees.

Affordability is always on the minds of students and

times. While other universities have had to increase tuition

significantly, some by double-digit amounts, UMKC has

held tuition rates steady for the past two years, and we

expect to hold the line for the coming academic year.

This means that our tuition is very competitive with other

four-year public institutions in the region. And given that

the College is essentially a small liberal arts college within

a bigger university, our tuition is very attractive when

Numerous scholarships are available to help cover the

cost of tuition, but people don’t know where to look for

them. That’s why we work very closely with our Financial

Aid office to provide a series of automatic scholarships to

students who qualify based upon ACT scores, class rank,

We continue to be successful in raising funds for

scholarships in the community. We have raised the number

of scholarships available to Arts and Sciences students to

dollars are being put to good use directly supporting our

One particular scholarship that I would like to draw your

inspiring professors, Jim Falls, who is retiring from UMKC

at the end of this year. We will miss him, his wisdom

and guidance. If you would like to contribute to this

scholarship, we welcome any amount, large or small. Please

to contribute. It is a great way to honor Jim, his teaching

and an A&S student in perpetuity.

In many regards, Stephen L. Danner (B.A.’77) represents a

not covered by his G.I. Bill. Also not unusual for many college

law school at the University of Missouri-Columbia.

and the path of service he took to get there. Once a history

major at UMKC, Danner is now a Brigadier General in the

National Guard units. In his first week on the job, Danner logged

more than 100 hours helping the state respond to an ice storm.

Danner brought to the position a well-documented history

of public service. His military career has spanned four decades,

including serving as Command Judge Advocate for the 35th Area

Danner comes from a prominent political family: his great

official careers. His own political career began long before he

finished law school. He served as campaign manager for his

“In every position you’re in, you’re either

Upon graduating law school in 1980, Danner started his own

law firm. He served as Chillicothe’s city attorney and as the chief

legal council for the Missouri House of Representatives. He

has now practiced law for more than 30 years, and he has been

he earned the Legislator of the Year award in 1985, and he served

Some may ask what one does with a history degree besides

teach? To them, Danner replies, “Anything and everything. In

every position you’re in, you’re either learning or teaching.”

Over the next few years, the College’s Philosophy department

will bid adieu to over 110 years of teaching experience, as

Before they go, however, they need your help creating an

endowed scholarship for the Philosophy department – and they’re

going to make it worth your while.

Gale has promised everyone who contributes $250 or more will

totally cleaned and ironed, with a Certificate of Authenticity.”

Aloha shirts. For more information on how you can make a

Magazine: A career of helping people A change in direction to the same ...