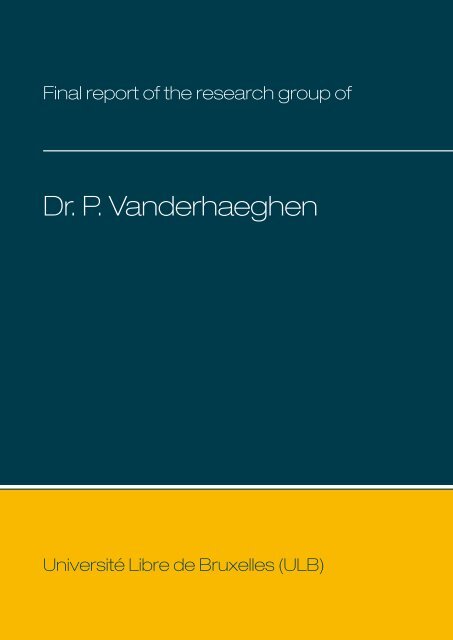 Final report of the research group of

Molecular mechanisms controlling the development and

evolution of the cerebral cortex.

The cerebral cortex is one of the most complex and important structures in our brain. The mechanisms

of formation of cortical networks have direct relevance to several diseases, such as epilepsy and mental

disorders, as well as for the development of rationally designed cell therapies for neurological conditions.

of the cerebral cortex, from stem cells to neuronal networks and from mouse to man, by combining

molecular and cellular approaches, both in vivo (using mouse transgenesis and in utero electroporation)

and in vitro (using organotypic assays and embryonic stem cells).

Funding of the FMRE/GSKE, providing a link with recently published work and in preparation, as well

as its perspectives in the future.

1. An intrinsic mechanism of corticogenesis from embryonic stem cells.

The cerebral cortex consists of several hundreds of different types of neurons, organized into specifi c

connectivity. The molecular mechanisms underlying the generation of such a cellular diversity remain

largely unknown, in particular due to the lack of appropriate reductionist models of cortical development.

devoid of any exogenous morphogen factors, we found that mouse ES cells cultured as monolayers

markers indicative of a forebrain identity. When exposed to appropriate morphogen antagonists during

their differentiation, in particular inhibitors of the Sonic-Hedgehog pathway, the fate of the ES cell-derived

population of neurons, most of which display landmarks of cortical pyramidal neurons, including a

generated sequentially, in a manner strikingly similar to the in vivo situation. Most importantly, when

grafted into neonatal mouse brain, they can connect with the rest of the brain like genuine cortical

in vivo, including regional and temporal patterning, and therefore constitutes an attractive and robust

system, which we currently use for the genetic dissection of the mechanisms of cortical neuron

specifi cation (Gaspard and Vanderhaeghen, 2010). We have started to implement a gain of function

screen by overexpression of transcription factors that can later the identity of the generated neurons.

We thus identifi ed several candidates (including zBTB20, Bcl6 and Tbr2) for which we have started

to defi ne transcriptional targets through microarray and CHIP analyses. In parallel, we have started to

explore the relevance of our model for cell replacement following cortical lesions in the adult, using a

combination of anatomy, physiology and functional imaging. Our fi rst sets of data already indicate that

axonal outgrowth to cortical and subcortical targets , providing a fi rst prrof of principle of their potential

use for brain repair (Michelsen et al., in preparation). On the other hand have succesfully started to to

implement the system to human ES cells. Using a similar default prototol, we have been able to generate

forebrain progenitors and cortical neurons from hES cells, following a temporal sequence similar to the

from hES cells would constitute a primary tool to study human cortical neuron development. Finally we

lines from patients displaying some of these rare diseases (Takahashi and Yamanaka, 2006). We have

in depth in vitro and in vivo as we have done previously for hES cells (Deleu et al., 2009).

2. Multiple roles for ephrin/Eph guidance genes in the development of the

of the connectivity of the forebrain, including the patterning of cortical sensory areas and development

for ephrins in the control of forebrain size, through the unexpected regulation of apoptosis of neural

ephrins, like neurotrophins, have evolved as pleiotropic factors that can control very different functions

depending on the cellular context (Vanderhaeghen and Cheng, 2010). We have now pursued these

forebrain. This has led to the demonstration that ephrins are required for the propoer patterning of the

To gain insight into the mechanisms involved in these processes, we have set up in utero electroporation

of neurons to dorsal vs ventral domains of the telencephalon. Using these in vitro assays, we have

identifi ed several candidate guidance factors, including ephrins-B1-2, in the patterning of the migratory

streams in the basal forebrain and cortex (Dimidschstein and PV, unpublished data). We followed up on

kos, available in the laboratory), in order to test for the consequences of the early disruption of migration

patterns on cortical and striatal function in mature animals. Using in vivo clonal analyses we have been

3. Developmental basis of human-specifi c features in the cerebral cortex.

Although many aspects of brain development seem to be remarkably conserved throughout evolution,

a number of neural features have undergone a considerable divergence in mammals, in particular in the

forebrain. We therefore started a project focusing on the developing human brain, trying to reveal what

in the human lineage, is strongly expressed in the human embryonic neocortex (Pollard et al., 2006).

Given its potential involvement in the development and evolution of the cerebral cortex, we study the

function of HAR1 in the mouse brain. To this end we are undertaking a gain-of-function approach, using

electroporation of human and mouse HAR1 expression constructs, as well as a knock-in line where

human HAR1 is conditionally expressed in the cortex, for which the fi rst mice are now being analyzed,

with special emphasis on potential impact on the reelin pathway. In parallel we have generated knockout

mice for the mouse HAR1 gene for which the fi rstt mice are now available.

Finally, we recently completed a microarray analysis that led to the identifi cation of several hundreds of

(Lambot et al., 2009). Most strikingly we identifi ed a small (around 50) subset of genes that display

in humans, which also display strong evidence of aceelerated evolution of their promoter regions in the

Vanderhaeghen,P. (2003). Area specifi city and topography of thalamocortical projections are controlled by

Vanderhaeghen,P., and Klein,R. (2005). Regulation of EphA4 Kinase Activity Is Required for a Subset of Axon

– Gaspard N, Gaillard A, and Vanderhaeghen P Making Cortex in a Dish: corticopoiesis from embryonic stem

regulation of ephrin/Eph signalling is required for the spatial patterning of the mammalian striatum. Development

Publications of the laboratory in the frame of the FMRE/GSKE grant 2008-2010:

– From stem cells to neural networks: recent advances and perspectives for neurodevelopmental disorders.

– Mechanism of primitive duct formation in the pancreas and submandibular glands: a role for SDF-1.

– Making Cortex in a Dish: corticopoiesis from embryonic stem cells.

– GPR3 receptor, a novel actor in the emotional-like responses.

– An intrinsic mechanism of corticogenesis from embryonic stem cells.

– Temporal regulation of ephrin/Eph signalling is required for the spatial patterning of the mammalian striatum. 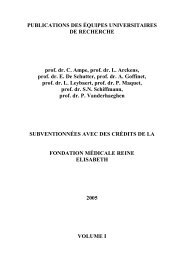 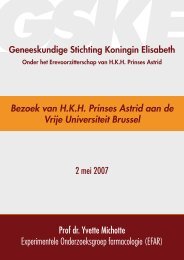 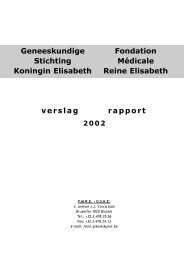 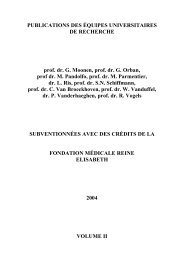 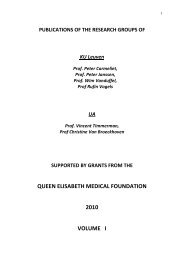 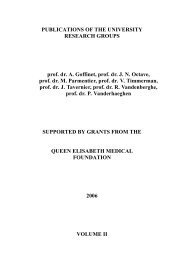 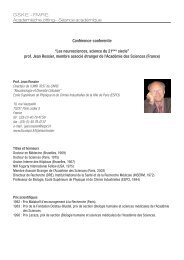 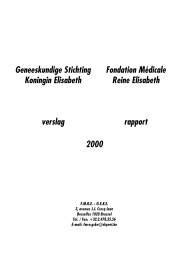 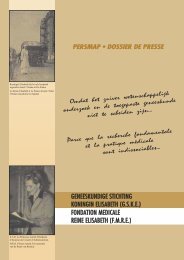 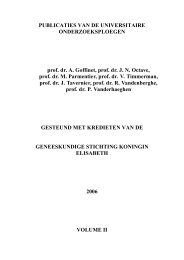 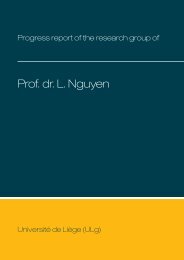 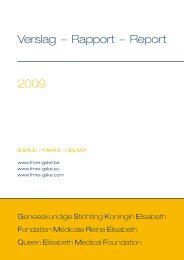 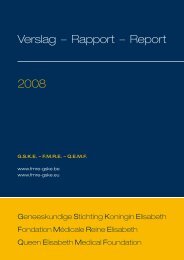 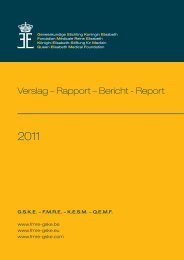 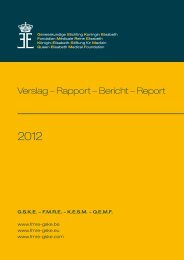 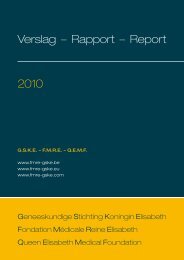 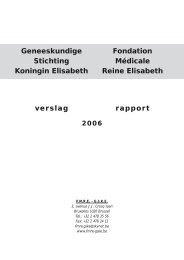 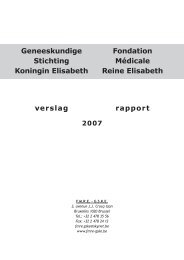 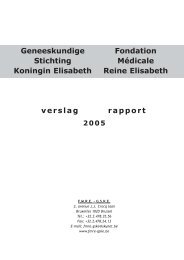 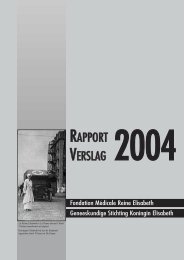 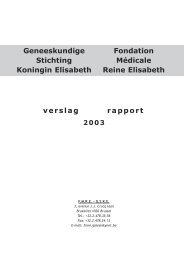 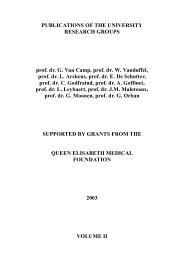 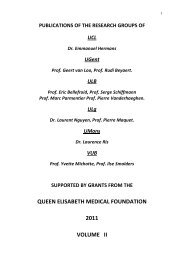