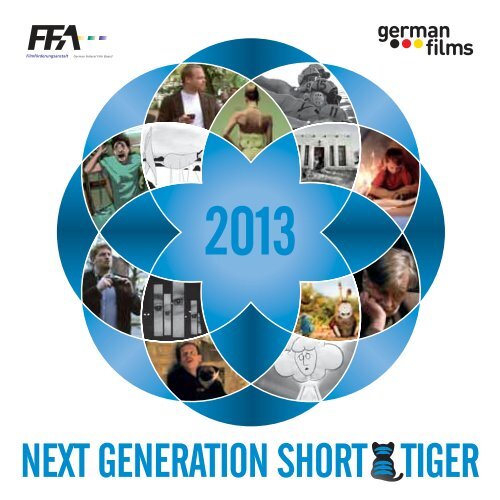 For the third time since 2011, German Films and the German Federal Film Board (FFA) join forces and invite

you to discover the 13 short films selected for NEXT GENERATION SHORT TIGER 2013. This program combines

the SHORT TIGER award-winners (best German shorts under 5 minutes) and the NEXT GENERATION, the

most remarkable German student shorts under 15 minutes. International audiences at the 2013 Cannes

exhibit a wealth of creativity and a variety of narrative forms.

With NEXT GENERATION SHORT TIGER 2013, German Films and the FFA present new film trends and

young talents in their early incarnation. The 90-minute program lets you participate in a journey through

different genres and subjects, either outright humorous, or tragic, sometimes both, exploring many perspectives

on human (and animal) life with a masterful and often surprising use of cinematic means. Short films

awareness of audiences. We hope you share our enthusiasm and help us spread the word: the program will be

available after Cannes for screenings at international festivals and film events throughout the year.

Group). The Next Generation student films were selected from a total of 59 submissions from

19 film schools; to be eligible the films had to be 15 minutes or under and to have been completed at German

film schools in 2012 or 2013. A record number of 74 films were submitted to the Short Tiger competition; the conditions

of entry for these films were suitability for theatrical release and a maximum running time of 5 minutes.

A swimming pool, interior, daytime. Twelve women and men are striving for the same goal, one which is closed

off to the outside world. With precise strokes, they manoeuver themselves into position, ready to dive into their

underwater empire. The film takes off on an adventure to the bottom of this 3.8 meter deep playground.

Pius Neumaier studied at the Bavarian Academy for Television (BAF) with a focus on Cinematography. He has

worked as a cinematographer and a camera operator for numerous TV productions and documentaries. Since

2011, he has been studying Cinematography at the University of Television & Film in Munich (HFF/M). His works

include documentaries as well as fiction films.

A photoshoot. The model Helen is unnerved. Back in the changing room she makes a surprising discovery.

Everything around her is edible - the chair, the TV, the walls…

Moritz Krämer was born in 1980 in Basel/Switzerland and grew up in the Black Forest region in Germany.

He studied Video and Text at the Berlin University of the Arts (UdK) and worked as a video artist, composer,

songwriter and musical director at various theaters. Since 2008, he has been studying Directing at the German

The sunken homeland; visiting a strange place, and the certainty that we are not alone. The rhythm of one’s

origins and the identity of the surroundings. ECHO is about how childhood reverberates; about complicated

relationships, and a departure to pastures new.

Merlin Flügel was born in 1987 in Naila. Since 2008, he has been studying at the Offenbach University of

Art and Design (HfG). He has participated in several exhibitions, his films include the short animations

For most people, sleep comes naturally, but for others, the night turns into an ongoing struggle to drift off into

oblivion. This film explores what it’s like to be awake against one's will and the feelings that accompany the

Art with a focus on documentaries. Since 2011, she has been studying Directing in the documentary class of

the University of Television & Film in Munich (HFF/M). Her short INTO THE MIDDLE OF NOWHERE (2011)

Film Festival 2011 and was nominated for the Cinema Eye Honor 2013.

The visiting room in a Berlin correctional facility for women. The convict Vicky is hysterically breaking up with

her longtime boyfriend Wolf. When Wolf refuses to accept the fact and stirs up trouble with the officers, he is

kicked out on the street. Out there he sees only one chance to save his relationship...

Florian Dietrich was born in 1986 in Wiesbaden. He worked for several cultural projects, including as a

director’s assistant and actor at theater productions, as a DoP and editor for films. Since 2007, he has been

studying Directing at the German Film and Television Academy Berlin (DFFB) and at the Tel Aviv University.

Every moment leads to another one. To get to understand one moment, you have to know about its history,

journey through moments and tells a story of a fateful chain of events that ends up in fire and ashes.

Alexander Heringer was born in 1985 in Marktoberdorf. He trained and worked as a media designer. Since

2009, he has been studying Audiovisual Media at the Stuttgart Media University (HdM). He directed the short

THE STRANGE PHOTOGRAPHER AND THE SOLITUDE

Thierry is a photographer on a visit in a foreign city. He is looking for the museum. Isabelle is lonesome and

helps him out. Together they go for a drink in a nearby pub. There, Thierry soon discovers that his prearranged

phrases in the foreign language won't lead to the results he desires. The dialogues of this boy-meets-girltragedy

were adapted from an audio language trainer.

studying at the University of Fine Arts Hamburg (HFBK).

For generations, a family lived in a spacious, beautiful and generous house. The generosity of the house had

become part of their life. Guests were always welcome to enjoy a pleasant stay. Until one guest arrived with a

before moving to Germany to study Digital Media at the Bremen University of the Arts (HFK). He started out

writing short stories before he found his passion in filmmaking. His debut short HOUSE (2012) was nominated

for the German Short Film Award 2012.

suicide. The event haunts him in his imagination and mixes rapidly with his own reality of social downfall in a

Valentin Gagarin was born in 1988 in Osinniki/Russia. Since 2009, he has been studying at the University of Fine

Design at the Hamburger Technische Kunstschule, graduating in 2012. She works as a freelance illustrator and

graphic designer. Robert Wincierz was born in 1987 in Hamburg. He earned a Bachelor’s degree in Business

Administration at Lüneburg University in 2011, and continued studying there for a Master’s degree in Management

Paul is a social media junkie and can’t live without his smartphone. But on his lucky day he’d be better off

leaving it at home.

Philipp Scholz was born in 1984 in Salzgitter. In 2009, he founded his film production company The Fu King

Production in Hamburg. He directs music videos, commercials and viral spots and also works as a storyboard

Fox and Rabbit live in an everlasting conflict. However one day they’ve got to stand united against an even

stronger opponent who is threatening them both. One thing leads to another – and the time of revenge has

come for the feeble Bird who has been harmed and mocked by everyone.

Alexander Dietrich was born in 1989. Following an internship at an animation studio, he has been studying

Animation at the Filmakademie Baden-Württemberg in Ludwigsburg since 2009. His films include ES GEHT

designer from 2006-2008 in Karlsruhe. Since 2009, he has been studying Animation/VFX at the Filmakademie

Baden-Württemberg in Ludwigsburg. His films include CHOP SUEY (2010, with Marco Hakenjos), TRAPPED

A typical Berlin drinking hole, the regulars propping up the bar. The price of beer’s gone up; we hear the usual

grumbles about capitalism, trivial events are recounted like great adventures, there are quarrels and confessions.

All the barflies know one another, like ‘em or not - just like a real family. But then death enters the

pub - and suddenly invigorates them all.

Youdid Kahveci was born in 1977 and grew up in East Berlin. She quit school, worked as a gardener, preferred

the underground, and made a diver’s license in Mozambique. Now she studies Directing at the German Film

Searching for her son, the mother of little Jacob is lost in a maze of corridors and shelves full of products –

always followed by the resolute announcements of the childcare facility.

Axel-Juhani Redlich), and worked as an animator and VFX artist for several TV and film productions. WARE-

THE STRANGE PHOTOGRAPHER AND THE SOLITUDE by Willy Hans, Jan Eichberg

We thank our partners 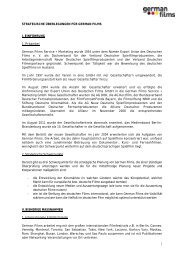 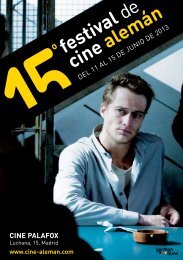 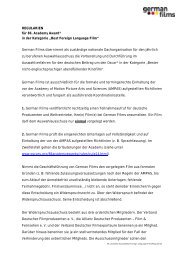 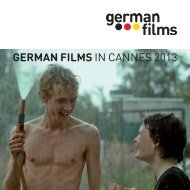 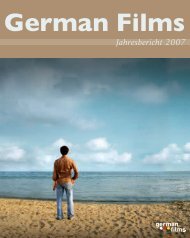 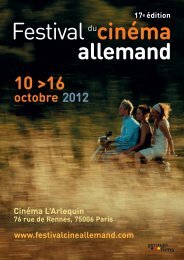 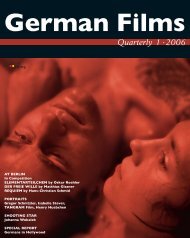 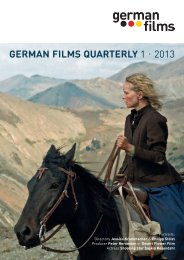 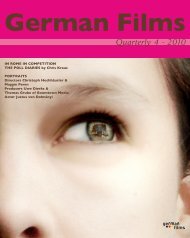 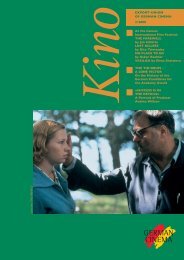 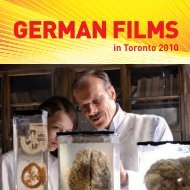 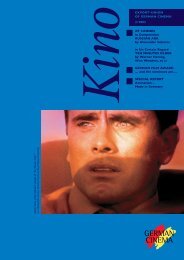 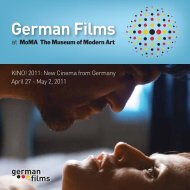 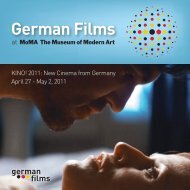 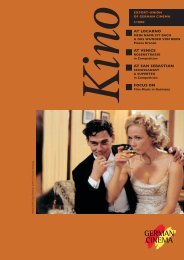 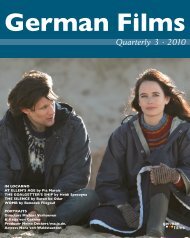 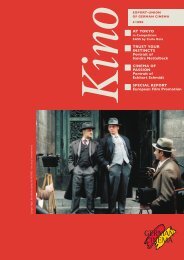 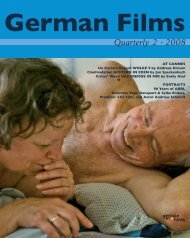 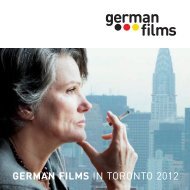 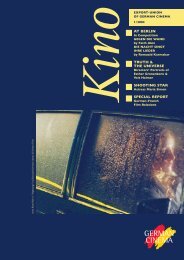