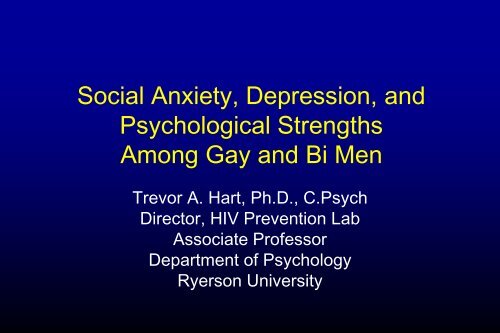 Among Gay and Bi Men

1. Prevalence of anxiety disorders and depression

among gay and bisexual men

4. Anxiety and depression do not come out of a

• Distress may instead come from negative life experiences

5. Psychological strengths of gay and bisexual

• What we know and don’t know

and bisexual men. Journal of Aggression, Maltreatment, and Trauma.

December). Psychological distress among HIV-positive and HIV-negative men who

have sex with men. Paper presented at the 2007 National HIV Prevention Conference,

intercourse among gay and bisexual male youth. AIDS and Behavior, 9, 505-512.

Thrust of This Talk

What is Sexual Health?

• Sexual health is a state of physical, emotional, mental

and social well-being in relation to sexuality; it is not

merely the absence of disease, dysfunction or

approach to sexuality and sexual relationships, as

well as the possibility of having pleasurable and safe

• For sexual health to be attained and maintained, the

sexual rights of all persons must be respected,

men exist within a larger context, driven by social

• Social marginalization is a cause of health inequities

experienced by a range of disadvantaged populations.

• Discrimination toward sexual minorities is a form of social

marginalization that is rooted in homophobia and is

that affect the physical and mental health of gay and

1. Prevalence of Anxiety and

Among Gay and Bisexual Men

First, what is a “Disorder”?

Example of An Anxiety Disorder That

May Be Higher Among Gay/Bi Men

– Marked and persistent fear of 1+ social or performance

situations in which the person is exposed to unfamiliar people

or to possible scrutiny by others. Person fears that he/she will

act in a way that will be humiliating or embarrassing.

provokes anxiety, which may take the form of a situationally

– Person recognizes that the fear is excessive or unreasonable.

– Feared situations are avoided or else are endured with intense

– Interferes with the person's routine, functioning, or

relationships, or there is marked distress

Psychological Strengths We Can See

• Gay and bi men don’t have higher rates of

drug or alcohol use disorders.

• This is despite the facts that

– It is really easy to have access to drugs and

alcohol in the gay community

– Gay men may have additional stresses that

straight men do not have

• Gay and bi men are often characterized by the

media and homophobic people as:

– Living for the moment

• Not much attention to how gay and bi men

– How gay and bi men survive and thrive despite

Need to Be Specific When Talking

• High anxiety as a personality trait was even

associated with less likelihood of having unprotected

• However, anxiety can be about anything

• Need for more specific questions – what is the anxiety

– Fears of not being liked by other people?

PTSD and Other Anxiety

– 1.6 times more likely to have engaged in sex work

trauma also were survivors of childhood sexual and

– Having lived through child abuse leads to adult risky sex

• We don’t know if other anxiety disorders are

associated with risky sex or other poor sexual health

Among Gay and Bi Men

• Fear about being evaluated in social

• Social fears may be exacerbated in members

What Does Social Anxiety

Have to Do With HIV and AIDS?

• 32% of gay men reported being less likely to use

– did not wish to offend their partner

• Adolescents who were embarrassed to use

condoms were 2.4 times less likely to use them

Social Anxiety as a Risk Factor for

Social Anxiety in the Two Samples

– No effect for heterosexual populations

– May reflect gender role differences among MSM vs.

• Social anxiety exerts its effects above and beyond the

other variables assessed in the literature

• Needed to replicate findings in other

– Adult MSM of any HIV status

Social Anxiety as a Risk Factor

in AIDS Patient Care and STDs)

Caucasian, 10% Latino or other)

– Better for individuals with low literacy

• Participants paid $10 as reimbursement for their

• Need for further exploration of this association in

– How does social anxiety exert its putative effects on risky

– With which types of partners does social anxiety exert its

Social Anxiety as a Risk Factor

from the Canadian Institutes of Health Research

• A special thank you to Massimo Di Domenico and Bojana

• The many men who participated in our study

What is this Study About?

• Examines mechanisms by which social anxiety

– fear of rejection for insisting on condom use (presented

53.8% were employed either full- or part-time

• Recruitment from the Polaris Seroconversion Study,

– A brief clinical interview (LSAS) and an Audio-Computer

measures at baseline and

– ACASI at a 6-month follow-up

month follow-up as reimbursement for their time

– If I insisted on condom use, I would be concerned:

• My partner would not want to have sex with me

• UAI in the past six months with

Fear partner will not want

to have sex with me

Simultaneous Predictors of UAI with

Social Anxiety and Risky Sex With

• Gay and bi men with higher social anxiety are

– May be because they are concerned that they

will be rejected by their partners for insisting on

support for gay and bisexual men

• Prevention workers may wish to attend to social anxiety

among gay and bisexual men, which predicts

• Interventions that integrate fear of being rejected in

interventions can be adapted to include social anxiety

out of a vacuum!

There is a lot missing from the

Strengths We Need To

– Hardly any studies focus on strengths

• How do gay men protect themselves in ways other than

– Getting tested for HIV and/or Sexually Transmitted Infections

Part of the Solution: New Research

about their mental and sexual health

• Will ask men about their health at 3 different

– Baseline when they start the study

• Engagement in the gay/bi men’s community

– The resources and support gay/bi men get

– From one’s friendship and family networks

– From the community (e.g., organizations,

• Personal beliefs about the need to protect oneself

and others from HIV and STIs

– Having goals for the future

– Positive expectations about the future

• How connected gay/bi men feel toward others

• How gay/bi men cope with stress

Another Part of the Solution:

promotion programs that build on STRENGTHS

– Offered by ACT, and eventually Positive Living BC

– Assumes that men are capable of making their own decisions

– Builds on each participant’s personal strengths and successes

• see Rick’s talk on GPS at the breakout sessions on Tuesday at 1:30pm

thinking across ASOs across Ontario

What Can We Take From This Talk?

• Some kinds of anxiety disorders are higher among

• Social anxiety and other kinds of anxiety come out of

homophobic and other negative experiences

• Most gay and bi men are still highly functioning and

Come Out of a Vacuum

• Many other life problems

What We Don’t Know

• How about other anxiety problems?

• How does anxiety affect other aspects of

What Health Providers Can Do

it in your clinic or case management setting

among people at risk for STIs

• Acknowledge that anxiety may come from a

What Prevention Workers Can Do

• Find out if social anxiety and/or trauma are

factors in your client’s lives

• Use your case management and counselling

• Refer when useful for the client

What Gay/Bi Men Can Do

• Identify if anxiety has affected your life

– Acknowledge that it probably came out of your life history

• Read more about anxiety and anxiety disorders, if relevant

• Is your anxiety level too high for you?

– Talk about it with your health and service providers

– Don’t blame yourself – it probably came out of real life

– Know that high anxiety is a treatable problem!

– Acknowledge that what how gay men feel about themselves 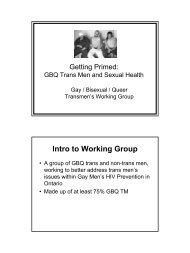 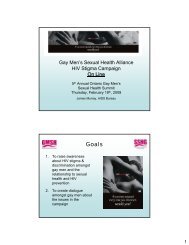 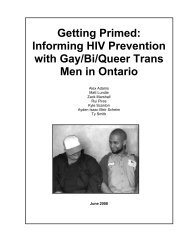 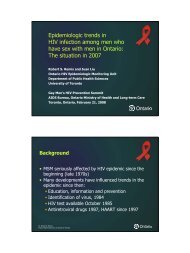 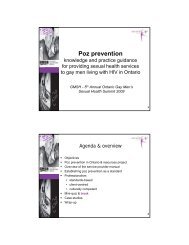 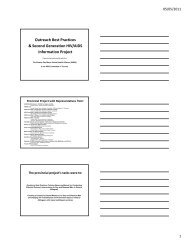 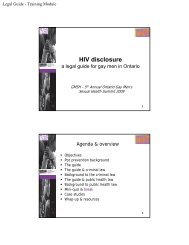 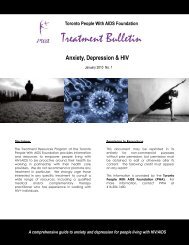 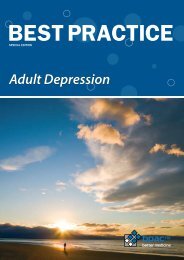