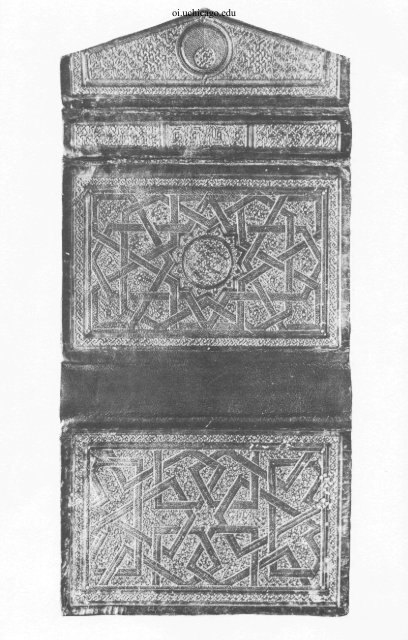 and Bookmaking exhibition was held at the Oriental Institute May

from North America, Europe, and the Near East attended. These

included not only Islamic art historians, but rare books librarians,

early bindings specialists, and museum officials, which made for a

great diversity of opinion in the discussions which followed each

Library (all photos of bindings are from the catatogue of the exhibition; this is

The Rap oi an earJy 15th

the Institute's collection (No. 8)

The rectangular object on the door of the case, center front, is actually a set of

Jewish phylacteries, illustrating related use of leatherworlc contemporary with

The catalogue was available to the participants before the symposium,

who were also able to attend a special viewing of the exhibition.

The exhibition, based on Bernhard Moritz's collection of

Islamic bookbindings from the twelfth to the eighteenth centuries

which was acquired by the Oriental Institute in 1929, was intended

to display the bindings in the wider context of bookmaking and

book production in the medieval Islamic world; and the symposium

explored this theme in depth.

At the first session, the Director J. A. Brinkman welcomed the

participants to the Oriental Institute, and Gulnar Bosch delivered

the opening address. Professor Bosch, once herself a student at this

The other side of the same case, featuring pages from the third largest Koran

university and the first person to investigate the Moritz bindings

in detail, stressed the collaborative nature of the exhibition, combining

research into the historical, technical and esthetic branches of

the subject. Then Guy Petherbridge, as a specialist in early Oriental

bookmaking, described the technique of manufacture of the Islamic

book and the characteristics that differentiated it from the Christian

and European traditions. This was followed by Ernst Grube's paper,

tracing the emergence of the pictorial style in the decoration of

Islamic book covers from the fifteenth to the seventeenth centuries.

In the afternoon, Duncan Haldane described the important but

little-known collection of Islamic bindings in the Victoria and

Albert Museum, London, which he is at present preparing for pub-

from the ceiling beams

lication. This was followed by a well-illustrated paper by Oktay

Aslanapa from Istanbul University, on the bindings in the most

famous of all collections, that of the library at Topkapu Saray. In

the evening before the opening of the exhibition to the public,

Basil Gray, formerly keeper of Oriental Antiquities at the British

Museum, gave a lecture on Il-Khanid and Mamluk manuscript

On the second day, Gulnar Bosch gave a detailed description of

the doublures in Islamic bookcovers, and an analysis of their decorative

motifs and derivation. Julian Raby, of the Oriental Institute

at Oxford, described with a detective's precision his researches into

The exhibition involved the study and display (above right) of contemporary

descriptions and depictions of the bookbinder's craft

the curious phenomenon of a Greek Christian scriptorium in Istanbul,

operating under the direct patronage of the Ottoman Sultan

Mehmet II. In the afternoon the present writer described the formation

of the Moritz collection and its subsequent dispersal and

the relationship between the bindings and other forms of Islamic

decorative art. The final paper was given by Anthony Hobson, who

talked about the evolution of European medieval binding and its

indebtedness to the earlier Islamic style. To conclude, Farouk

Mustafa of the Department of Near Eastern Languages and Civilizations

once again stressed the importance of the book in Islamic

society and brought the symposium to a close.