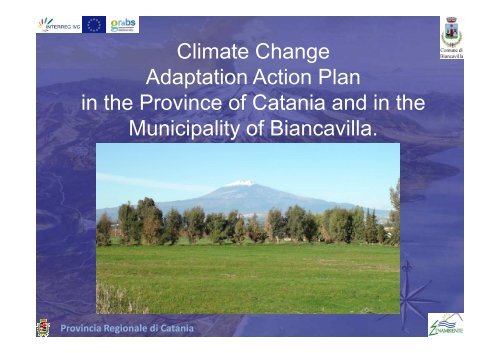 in the Province of Catania and in the

Climate relevance of the project

The actions carried out by Etnambiente in the

frame of GRaBS respond to the problems related

to climate change in Sicily and, in particular, to the

The climate in Sicily is typically Mediterranean

Nevertheless in recent years, as a result of global

climate change, even Sicily has experienced

periods of unstable weather which were unheard

downpours and a general increase in average

temperatures, in particular during spring and

autumn. The north-east area of the island, where

Catania is located, is a little cooler than the northwest

and the south of the island. However, in

rainfall ("leopard spots") has been experienced

whereby there may be very heavy rainfall in one

area but, at the same time, another area only a

few kilometres away is completely dry.

General overview of the problems of the island:

By the end of the century, the average annual temperature on the Mediterranean will probably rise

between 2.2 and 5.1°C, well above the global average. This wa rming should be definitely detectable from

15 to 25 years depending on the season. The maximum warming is expected to be in summer, with an

intensity of heat waves is also expected. Rainfall totals are likely to decline between 4 and 27%, with a

particularly marked decline in summer, which could reach 53%. Water availability will decrease, especially

on the southern shore of the Mediterranean which is already vulnerable to water shortage. Despite this

decrease, the frequency of extreme precipitation may not decline and could even increase. The risk of

The ecosystems of Sicily, already

fragile, will be seriously threatened by

all these changes. Some of them are

expected to migrate northward or to

higher altitudes, which can cause

problems for the health of plants,

animals and even men; others may

also disappear. It is important to note

that the uncertainties of local climate

change and ecosystem response are

very important, and we cannot rule

out the possibility of more

The responses of precipitation and

1. On the political level, different politicians-representatives of the Municipalities involved are participating

to the development of the project actions. Their participation is very important because political decisions

can change laws and regulations that are related to climate change adaptation/environmental problems.

They can be summarized as tax incentives, greenhouse gas emissions limits or establishing a regulatory

framework within which carbon trading markets can operate. Political actions can also gain media and

2. On the other hand, the technical contribution made by experts is the initial step in examining how

economic development, technological progress). The assessment in which the Province of Catania is

ETNAMBIENTE is contributing to all project actions developing the following steps:

1. Creation of a specific protocol for green space improvement and climate change adaptation to be

2. Insertion of climate change adaptation rules (especially defined in the PEACE protocol) in the territorial

plan of the Province of Catania.

3. Organization of thematic workshops, focused on different topics related to particular problems of the

territories located around the Etna mountain (in particular in the cities of Belpasso and Biancavilla).

4. Implementation of the GRaBS measures in the 2007-13 regional environmental programs (PO FESR

“Network park”. The Simeto Valley is a compound of independent small municipalities at the fringes of the Etna Mountain

metropolitan region. This area could evolve into an urbanized landscape, displaying all the properties of a typical

agglomeration – a terrain formed by a heterogeneous assembly of buildings, punctuated by agricultural fields, and

crisscrossed by massive traffic infrastructure. In order to generate a common ground that provides the basis for

use: the NETWORK PARK project proposes, in few works, a system of landscape connections along the existing

waterways, an infrastructural framework with greenery, including pathways, sanitary and waste collection facilities, as well

as spaces for public activities. The initial project phase (starting from the Municipality of Biancavilla site called Monte

Calvario, originally affected by asbestos and today in the process to be transformed in a green area) introduces a path on

central market. Going beyond the mere provision of technical infrastructure, the project underscores the significance of

public space as a means to foster social identity.

guidelines, such as “Structural Plan”.

Yet the proposals necessitate

use and maintenance schemes require,

matters. A great example on this kind of

methodology has been learnt in

Amsterdam, during the mentoring

program which took place on June

multicultural society present in the city

and to particular and interesting

involve youth people in the growing of

This same approach is certainly not an

easy for our society, because of the

by the administration (normally) in Italy

and especially in the south of Italy.

spaces with linear, connecting paths and green elements. Thus parks, play and sports fields as well as free spaces are

linked into a green system and embedded in a super ordinate context. Therefore, the "Green Network" concept can

simultaneously fulfill several functions: it allows for safe and attractive walkways and cycle paths, has positive impacts on

the microclimate and the local ecology, allows local recreation and positively contributes to the region’s overall appearance

(Catania). The possible objectives of this project can be summarized as follow:

1. improvement and preservation of the quality of life in the URBAN area with an expansion of the "Green areas

and parks" to the surrounding parts of Simeto Valley.

2. Development of local recreation potentials and safeguarding of local and regional green connections

3. Carry out a pilot experience site in the municipalities of the southern/east environs of Etna Vulcan.

This publication was made possible tahnks to the GRaBS project, financed in the frame of the