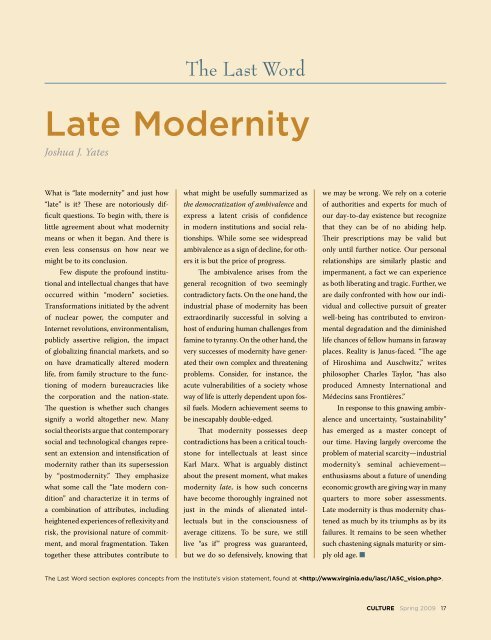 What is “late modernity” and just how

“late” is it? These are notoriously difficult

questions. To begin with, there is

little agreement about what modernity

means or when it began. And there is

even less consensus on how near we

and intellectual changes that have

Transformations initiated by the advent

of nuclear power, the computer and

of globalizing financial markets, and so

on have dramatically altered modern

life, from family structure to the functioning

the corporation and the nation-state.

The question is whether such changes

signify a world altogether new. Many

an extension and intensification of

modernity rather than its supersession

by “postmodernity.” They emphasize

what some call the “late modern condition”

a combination of attributes, including

heightened experiences of reflexivity and

risk, the provisional nature of commitment,

together these attributes contribute to

the democratization of ambivalence and

express a latent crisis of confidence

in modern institutions and social relationships.

While some see widespread

it is but the price of progress.

The ambivalence arises from the

contradictory facts. On the one hand, the

industrial phase of modernity has been

extraordinarily successful in solving a

host of enduring human challenges from

famine to tyranny. On the other hand, the

very successes of modernity have generated

their own complex and threatening

problems. Consider, for instance, the

acute vulnerabilities of a society whose

way of life is utterly dependent upon fossil

contradictions has been a critical touchstone

for intellectuals at least since

Karl Marx. What is arguably distinct

about the present moment, what makes

modernity late, is how such concerns

have become thoroughly ingrained not

just in the minds of alienated intellectuals

but in the consciousness of

average citizens. To be sure, we still

live “as if” progress was guaranteed,

but we do so defensively, knowing that

we may be wrong. We rely on a coterie

of authorities and experts for much of

our day-to-day existence but recognize

that they can be of no abiding help.

Their prescriptions may be valid but

only until further notice. Our personal

relationships are similarly plastic and

impermanent, a fact we can experience

as both liberating and tragic. Further, we

are daily confronted with how our individual

and collective pursuit of greater

well-being has contributed to environmental

degradation and the diminished

places. Reality is Janus-faced. “The age

of Hiroshima and Auschwitz,” writes

In response to this gnawing ambivalence

has emerged as a master concept of

our time. Having largely overcome the

enthusiasms about a future of unending

economic growth are giving way in many

as much by its triumphs as by its

failures. It remains to be seen whether

such chastening signals maturity or simply

The Last Word section explores concepts from the Institute’s vision statement, found at . 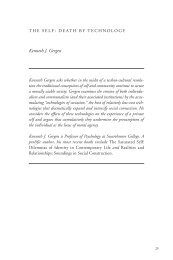 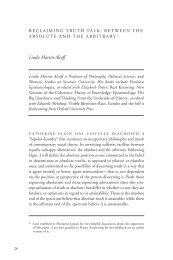 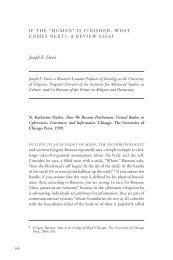 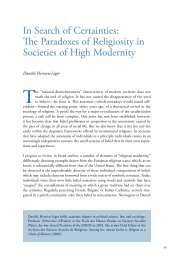 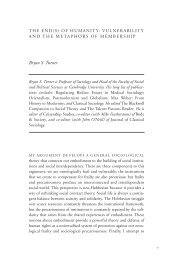 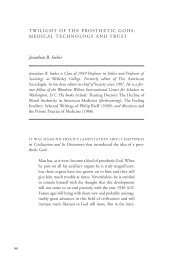 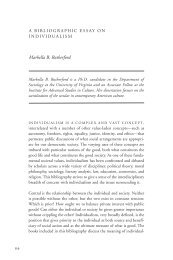 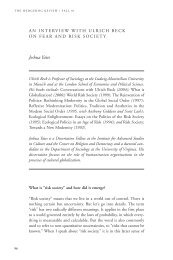 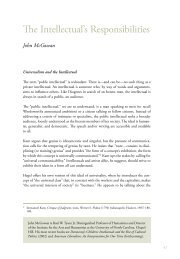 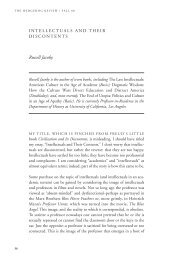 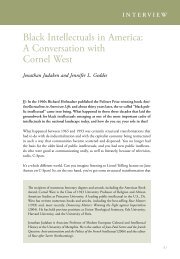 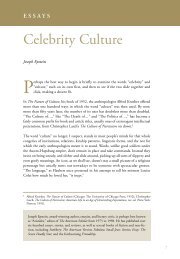 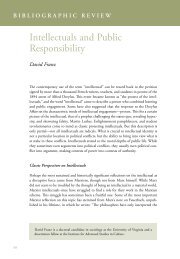 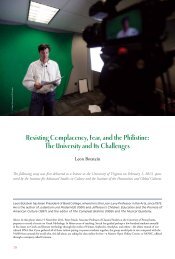 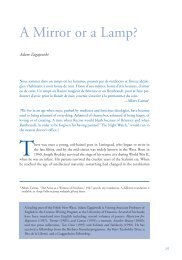