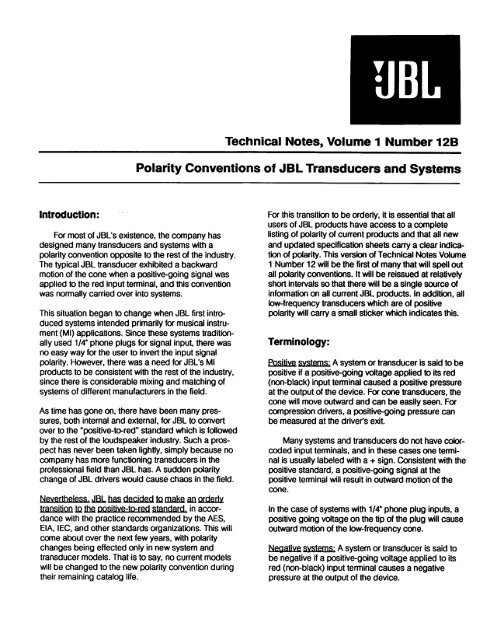 For most of JBL's existence, the company has

designed many transducers and systems with a

polarity convention opposite to the rest of the industry.

motion of the cone when a positive-going signal was

applied to the red input terminal, and this convention

was normally carried over into systems.

This situation began to change when JBL first introduced

(Ml) applications. Since these systems traditionally

used 1/4" phone plugs for signal input, there was

no easy way for the user to invert the input signal

polarity. However, there was a need fa JBL's Ml

products to be consistent with the rest of the industry,

since there is considerable mixing and matching of

systems of different manufacturers in the field.

As time has gone on, there have been many pressures,

both internal and external, for JBL to convert

over to the"positive-to-red" standard which is followed

by the rest of the loudspeaker industry. Such a prospect

has never been taken lightly, simply because no

company has more functioning transducers in the

professional field than JBL has. A sudden polarity

change of JBL drivers would cause chaos in the field.

Nevertheless. JBL has decided to make an orderly

transition to the nositive-to-red standard, in accordance

with the practice recommended by the AES,

EIA, IEC, and other standards organizations. This will

come about over the next few years, with polarity

changes being effected only in new system and

transducer models. That is to say, no current models

will be changed to the new polarity convention during

For this transition to be orderly, it is essential that all

users of JBL products have access to a complete

listing of polarity of current products and that all new

of polarity. This version of Technical Notes Volume

all polarity conventions. It will be reissued at relatively

short intervals so that there will be a single source of

information on all current JBL products. In addition, all

low-frequency transducers which are of positive

polarity will carry a small sticker which indicates this.

Positive systems: A system or transducer is said to be

positive if a positive-going voltage applied to its red

at the output of the device. For cone transducers, the

cone will move outward and can be easily seen. For

compression drivers, a positive-going pressure can

be measured at the driver's exit.

Many systems and transducers do not have colorcoded

input terminals, and in these cases one terminal

is usually labeled with a + sign. Consistent with the

positive standard, a positive-going signal at the

positive terminal will result in outward motion of the

In the case of systems with 1/4" phone plug inputs, a

positive going voltage on the tip of the plug will cause

outward motion of the tow-frequencycone.

Negative systems: A system or transducer is said to

be negative if a positive-going voltage applied to its

pressure at the output of the device.

The following is a comprehensive listing of all

category. Within each category, models are indicated

as positive or negative.

Control Monitors; all models are positive:

Sound Reinforcement and Theater Systems; the

pressure at the output of the upper tuned

chamber when a positive-going signal is applied to the

not fit either positive or negative polarity conventions):

A few examples are presented. Many times, JBL

' 1 shows how such a system should be wired:

Concert Series; all models are accessed through multipin

plugs which are harness-wired to power amplifiers.

The overall polarity of the systems is positive, with a

positive-going signal on Pin-2 at the input of the

amplifiers causing a positive-going motion of the low

can be configured in several ways, including standard

input terminals as well as barrier strips. The poling

convention for all models is positive.

JBL has always recommended that absolute

polarity standards be maintained throughout an audio

Since most microphone and electronics manufacturers

adhere to the "pin-2 hot" convention, this ensures that

a positive-going signal at the input of a microphone

will produce a positive-going signal at the non-ground

output of a power amplifier. If JBL negative convention

should be made at lu£ loudspeaker's input terminals

themselves. Note carefully: making the polarity

inversion anywhere else in the system is an invitation

in proper polarity. In this system, because of the short

length of the high frequency horn, it is recommended

that the HF section of the system be wired in opposite

polarity with the LF section in order to get proper

summation at the crossover point. Since the LF

section of the system is inverted at the amplifier's

output, it is obvious that the feed to the HF section