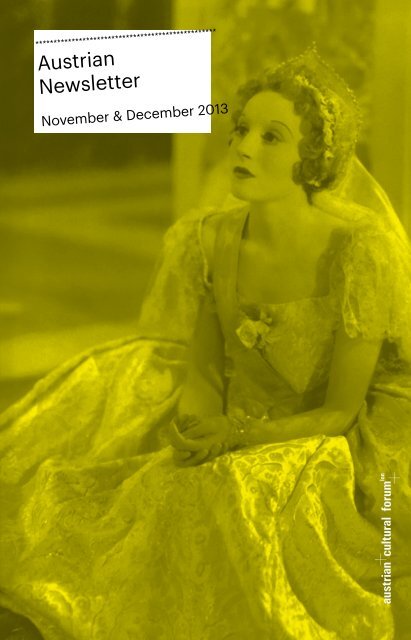 The exhibition, curated by Lucas Cuturi,

presents four Austrian artists who use

language as the primary material for their

Laussegger have developed a special

programme to generate text with art

Höller uses books for each of his collages

while Roman Pfeffer transforms text to

Out of the Shadow

This is the first ever UK tour by critically

styles crew Nobulus. Out of the Shadow

on a grand scale by a 10-strong crew.

Using an extraordinary mix of breakdance,

dance, acrobatics and ballet Out of the

Shadow tells a cautionary tale – from

the creation of the Universe and

evolution of man through to an imaginary

Out of the Shadows, Nobulus,

Meaning and making of

This talk is held in conjunction with the

The innovative exhibition considers the

in portrait production at a time of social,

Curatorial Assistant at the National Gallery,

will address both the show’s key themes

and aspects of the practical process of

putting this exhibition together.

A Night Under The Stars

Maltman sing arias and duets from

The Marriage of Figaro, Don Giovanni

and The Magic Flute, in a gala concert

in support of The Passage, a charity

Programme highlights also include the

finale from Symphony No.41 (Jupiter),

Ave verum corpus, sung by the Choir of

and an appearance by the inspirational

Serge Reggiani to star in his enigmatic

to be the cinematographic event of the

decade but three weeks into filming,

drama unfolded and the project came to a

standstill. The images captured until then,

said to be incredible, were never shown.

material and produced an emotional

ill-fated project. 2013 would have marked

Romy Schneider’s 75th birthday and the

ACF will screen this unique and unusual

production in her memory.

The Dead and the Living

and the Living. The discovery of an old

birthday propels her to question what

her Grandfather did during WWII. As she

confronts the ugliest of truths – and finds

herself falling for an Israeli photographer

– hidden issues of responsibility and

guilt erupt into view. With a fresh,

Berlin, Vienna and Warsaw, this is

a story about the intricacies of life at the

crossroads between old and new Europe.

featuring composers who were forced

into exile or murdered in the Holocaust,

Part of this programme is included on their

Anton and Ryan recorded together with

by David Parry. This project was initiated

by exil.arte, an Austrian initiative for exiled

music. A discussion as well as interviews

with the conductor David Parry and Gerold

Maria Neckam is a New York-based

Austrian vocalist and composer and one

of the most original young Austrian voices

on the international stage. The New York

Times describes her as ‘a jazz singer of

composure and purpose’. Hailed as ‘a

compares her with Joni Mitchell, Mahler

and Schoenberg and says she ‘functions

as a coequal instrumentalist and deft

detachment’. Maria will be accompanied

by Austrian guitarist Hannes Riepler and

perform at Charlie Wrights, Hoxton on

This lecture by Heide Kunzelmann,

Director of the Ingeborg Bachmann

Centre in London, will analyse the Austrian

relationship to the English language and

was strongly influenced by the aesthetics

of English Romanticism and Gothic

literature of the 19th and 20th century and

the way English culture and literature

literature in Austria and looks at curious

and fascinating adaptations of British and

Literature and Talks at Southbank Centre

presents an evening with Caroline Bergvall

and Peter Finch, two leading lights in the

their work in the context of the Art

from Bergvall’s language art to Finch’s

will be followed by a conversation and

audience questions chaired by the poet

Steven Fowler, who will also give a short

The event is organized in association with

Haas, a featured composer at this year’s

Festival, is presented in several concerts.

The London Sinfonietta will premiere

in vain, a work hailed by Sir Simon Rattle

as one of the undisputed new music

masterpieces of the 21st century. The

in the wake of the rise of Austria’s rightwing

from light to darkness to complement

Out of Europe: Film Art from

programme, presented by and featuring

the works of Austrian artists, filmmakers

and curators Anderwald & Grond, with

showcase filmmakers with double or

multiple screenings and discussions of

This festival, organised by the Goethe

features films from the past 10 years

which have emerged from an exciting

Experimenting with formal elements that

go against the grain of the standard notion

of documentary, these films quite literally

brings a number of these films together

and places them in a discursive context.

The Austrian films to be screened include

acclaimed Gangster Girls about a theatre

group in a women’s prison.

and his String Quartets

a series of concerts of Alexander

Zemlinsky quartets performed by the

Brodsky Quartet. To complement these

performances the ACF will host a talk

by conductor Antony Beaumont, one of

the world’s leading experts on Alexander

Zemlinsky. Beaumont has written a major

biography on the Austrian composer

and has published translations of Gustav

Mahler’s letters to his wife Alma as well as

Alma’s diaries and a biography of Busoni.

The final two Zemlinsky quartets will be

performances from all over Europe

present their piece Your Majesties;

a humorous lecture performance about

war, peace, and hope. The work is based

Further performances take place on the

For the third year running, the Beethoven

returns under the sponsorship of

Bösendorfer. In this competition the best

Colleges will compete against each other.

to spot future talent. This event is

organised by the Beethoven Piano Society.

and highlights the life stories of Austrian

women who immigrated to Britain after

the Second World War. The engaging

and dignity of these adventurous women.

An accompanying book examines their

reasons for leaving Austria, how they

adapted to a new life, a new language,

new customs in the UK, and the reaction

to their arrival by the post-war British

society. Destination UK is an unusual and

timely collection of works which addresses

legendary Arditti Quartet, is one of the

most important performers in the UK’s

contemporary music scene. During a

has worked with the leading composers

and ensembles of his time. He continues

his quest to explore new music and

improvisation in a special concert at the

ACF London where he will perform world

which were especially commissioned for

this concert, as well as pieces by Egon

at the ACF this autumn. Mira

her wide-ranging, changeable voice and

her stunning classical guitar technique to

Dead will be released at the end of the

This autumn the ACF London launches

its first lunchtime concert with a special

Fernandes and Ranko Marković. They will

perform the Viennese Valse as ‘danced’ on

one piano by four hands. The programme

Rachmaninov, and Rihm among others.

Fernandes is currently a professor of

chamber music at the University of Music

and Performing Arts Vienna and Marković

is the Artistic Director of Konservatorium

Over four concerts the renowned Brodsky

with the too rarely heard complete cycle

of quartets by Alexander Zemlinsky. This

Jewish Viennese composer was a protégé

of Brahms and Bruckner and colleague

of Mahler and Schoenberg. The series is

complemented by at talk at the ACF by

Merz at the ACF London. Mimu is a Parisbased

singer and songwriter who merges

and electronic instruments. Her new

This is the UK première of two new films

and Sebastian Meise and will be followed

by a Q&A session with the directors.

which weaves a maze through intertwined

love affairs, which can only lead to one

Stilleben about a family torn apart by a

Prize for Best Austrian Film at the 2012

Ahead of celebrated Austrian composer

Georg Friedrich Haas’ premiere at the

Southbank Centre the ACF London and

Royal College of Music are pleased to

announce a ticketed workshop with the

composer. Haas will work with an RCM

quartet and college composers on his

2nd String Quartet. The workshop will be

overseen by RCM Head of Composition,

William Mival, and is open to the public.

24 instruments, is an exploration of a

musical sound outside the standard

tonal system of composition. The normal

concert experience is altered with parts

of the performance given in pitch-black

according to a series of carefully planned

lighting changes that alter and heighten

the listener’s senses. This extraordinary

work has been performed many times in

Europe and now has its much-awaited

premiere in London. Presented by the

London Sinfonietta as part of Southbank

by Alex Ross’ book The Rest is Noise.

(trumpet & flugelhorn) have been playing

together for several years in different

ensembles all over Europe and just

released their new album At The Age

Of Six I Wanted To Be A Cook. For this

concert Rom and Eberle will be joined by

composer Isambard Khroustaliov, who in

2011 was selected to work with the London

Sinfonietta as part of their Writing the

perform a concert at the Vortex Jazz Club

of this evening is to present an alternative

narrative to the migrant story. This is a

unique opportunity to hear from the women

themselves about how they experienced

of Catherine the Great

fictitious) story of the clever German

Bergner) who outwits the hostile Russian

the throne as Catharina I, Tsarina of Russia.

In conjunction with the exhibition

Destination UK which opens on the

26 November, the experiences of three

are explored through readings of their

arrived in the UK during the late 1940s

to seek work and a better life. London

continues to hold an attraction to those

who seek to broaden their horizons. With

readings and discussions, the intention

The film, directed by Viennese director

Bergner, was the first they made in

British exile. When it opened in Germany

in March 1934, the Nazi press viciously

which led to the film being banned from

German cinemas. The screening at the

ACF will be introduced by Brigitte Mayr

& Michael Omasta (Synema) who have

written numerous books on the subject of

Until – 18 Nobulus UK Tour: Out of the Shadow

The Portrait in Vienna 1900

A Night Under The Stars

17 Out of Europe: Film Art from Austria

20 Alexander Zemlinsky and his

21 Currency: A European exchange of

6 Darkness and Light ‐ Haas’ in vain

12 Cineclub: The rise of Catherine

promotes cultural contacts between the

UK and Austria by organising events and

supporting artists and projects in the fields

(Cover image) The Rise of Catherine the Great

Events at the ACF London are FREE

Space is limited so please book in advance 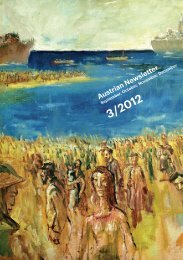 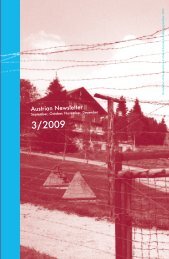 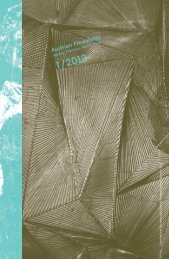 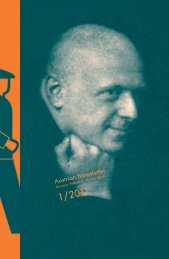 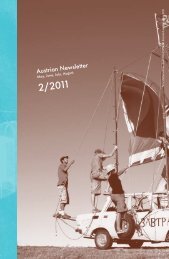 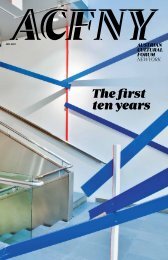 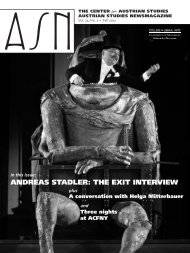 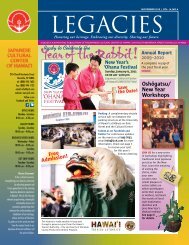 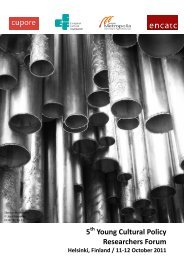 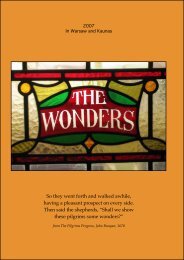 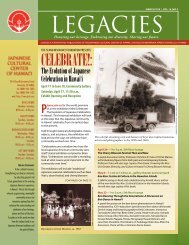