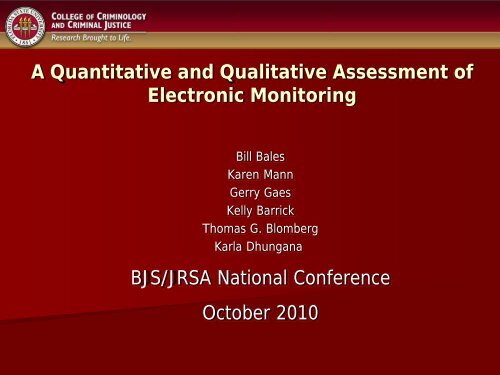 A Quantitative and Qualitative Assessment of Electronic Monitoring

A Quantitative and Qualitative Assessment of Electronic Monitoring

A Quantitative and Qualitative Assessment of

– Advances and improvements in technology

• Research has not kept pace

Florida as the Evaluation Site

Florida is appropriate for EM research for

Background of EM in Florida

‣ EM authorized by the Florida Legislature in

frequency (RF) in 1988 for offenders sentenced

to community control, commonly known as

required to wear ankle bracelets that

communicate with a larger device carried by

offenders at all times, called a monitoring

Background of EM in Florida

‣ The MTD communicates with a satellite

and transmits a signal to a monitoring

center through a cell phone within the

‣ The MTD has an LCD screen to display

messages to offenders from supervising

‣ Officers are able to track the exact location

of offenders on a computer screen to

determine whether they have violated their

conditions of supervision by entering

• The EM program in Florida changed dramatically as a

result of the Jessica Lunsford Act (JLA), passed in

• Jessica Lunsford was a nine-year-old Florida girl who

was kidnapped, raped, and murdered by a previously

• The JLA amended many offenses to make

penalties for sex offenders who fail to register with

provisions for certain offenders, and appropriated

predators or for offenders who are over the age of 18,

who violate certain statutes involving a victim under

was amended to require “probationers, community

controlees, or conditional releasees who have a current or

prior conviction for violent or sexual offenses” to be

monitored by a “system that actively monitors and

years or older, who victimize persons under the age of 15

and have had a probation or community control sentence

revoked, are required to be placed on active GPS if the

recurring general revenue for the purpose of increasing

Placements on EM in Florida by Type of Device:

Trends in Active Offenders on EM:

The Cost of EM

covers the services from EM provider in relation

to the equipment, not the extra staff time

cost for the Monitoring Center

• The per diem equipment and vendor services

costs for RF and GPS have declined between

Cost of Imprisonment Versus EM

• Since EM is the most restrictive form of community supervision

and is explicitly designed to divert offenders from a state prison

sentence or to keep those who have post-prison supervision from

returning to prison, a comparison of EM and imprisonment costs

• In comparison to the cost figures of EM devices noted previously,

the average daily cost of prison operations per inmate was $55.09

• This does not include the cost of constructing new prisons or

expanding existing facilities, which resulted in an expenditure of

correctional facility for one year.

Cost of Imprisonment Versus EM

• These relative costs of using electronic surveillance to

supervision versus housing them in state prison speaks

to the importance of determining if EM is effective in

preventing felons from absconding, violating their

• Additionally, it is possible to better identify those

offenders who are high risk and would likely have been

sentenced to prison but are low risk while under

community supervision because of the electronic

millions of dollars by avoiding the cost of the

construction of new prisons and the high reoccurring

– Is EM effective in reducing the

likelihood of failure while on

– How does EM impact offenders

families, employment, and ability to

– Revocation for a new offense

– Revocation for a technical violation

– Revocation resulting in a jail or prison

Our cohort of supervision admissions from 2000 to 2006

between the EM and Non-EM comparison cohorts on

128 variables, including dummies for circuit,

criminal justice information from prior periods of

Therefore, we are confident we have equivalent groups

except for the treatment of Electronic Monitoring.

• EM reduces the likelihood of failure under

community supervision. The reduction in

the risk of failure is about 31%, relative to

offenders not placed on EM.

• GPS has more of an effect on reducing

failure than RF technology. There is a 6%

improvement rate in the reduction of

on GPS supervision relative to offenders

• EM supervision has less of an impact on violent

offenders than on sex, drug, property, and other

types of offenders, although there are

significant reductions in failure rates for all of

• There are no major differences in the effects of

• There were no major differences in the effects

of EM for different types of supervision.

Qualitative Component of the EM Study

• While quantitative assessments of various

reforms are the norm in correctional program

• But without qualitative findings, these codified

descriptions are largely without compelling

• To address this issue, we include a qualitative

assessment of EM surveillance for felony

offenders living in the community.

Questions Addressed Through the Qualitative

Component of the EM Study

• What are the goals and objectives of the EM

program? Have they been implemented?

• Does supervising offenders using the

enhancement of EM result in the intended

outcomes of more compliance to the conditions of

• How has EM impacted offenders in ways not

• Are the most appropriate offenders being placed

on EM and are there offenders who are not EM

Questions Addressed Through the Qualitative

Component of the EM Study

• Has EM been used as an alternative to

• What issues arise in the use of the

that have consequences for the offender and

the EM program in general?

• Is the judiciary adequately familiar with the EM

program to make informed decisions about its

application as part of their sentencing

• What practices and policies has the FDOC

implemented that have improve EM?

Qualitative Component of the EM Study

Number and Locations (County/Circuit) of Completed and

EM cases do not make up the bulk of officers’ caseloads.

Almost 50% of the officers had two or few EM cases.

Officers had an average of 30 Non-EM cases.

Impact of EM on Offenders Significant Others

Information was collected during the interviews to

determine the extent to which EM impacts

offenders' relationships with their spouses or

Of those who were married or in a relationship,

only 14% described their spouses/partners as

helpful, supportive, or understanding about

43% claimed that EM is an inconvenience and a

burden to their partners and/or negatively

One offender said matter-of-factly that EM “serves as a

scarlet letter” and has had a detrimental impact on his

relationship with his family. Another noted that “Every

time it goes off, we think the police are coming to

Impact of EM on Offenders Families: The Officer’s Perspectives

• Similar to offenders, officers agreed that being placed on EM

alters offenders’ relationships with their significant others, as

well as with their children.

• 89% felt that offenders’ relationships with their significant

others change as a result of being placed on EM, with most

(65%) describing the negative impact as stress from the

nuisance and inconvenience, and spousal involvement

• Most (70%) of the officers feel that EM negatively impacts

offenders’ relationships with their children because the

children feel stressed about or ashamed of the parentoffender,

the restrictions on the places where the

parent/offender can take them, the limitations or

prohibitions on visits with the children, and the interruption

it brings into children’s lives.

Impact of EM on Offenders Employment:

• The ability of offenders to obtain jobs and/or to

retain employment may be impacted by EM ,

especially from the visible MTD and having to

“walk the box” for approximately 15 minutes

when the signal is lost.

impacted their ability to obtain employment in a

• The following are sample statements made by these offenders:

• “Business owners don’t want customers to have to deal with

• “Potential employers just say no, because they can’t see how I can

do the work with the box.”

Impact of EM on Offenders Employment:

• Officers were asked the question, “Do you believe the

offenders job situations change once they are placed

believed that offenders’ job situations change as a

• This question was followed up by asking those who

• 24% said carrying equipment could cause a problem.

The Judiciary’s Perceptions of EM and

How it is Applied: Officers Opinions

including those who carry an EM caseload, are integrally involved in

• Officers were asked, “What is your opinion regarding how judges

perceive EM and how they make decisions regarding the placement

of offenders on EM?”

• The most common opinions expressed about judges’ perceptions of

concept of EM” (5.7%). These responses combined comprise about

believe judges are not as knowledgeable about the EM program as

officers feel they should be.

• “Judges are not familiar with the process. I’m not sure how they

determine who gets on EM.”

• “They place offenders on EM based upon statute.”

The Prosecutor’s Perceptions of EM and How it is

• Officers were also asked, “What is your opinion

regarding how prosecutors perceive EM and how they

make decisions regarding the placement of offenders on

• The dominant perception among supervising officers is

that prosecutors are not well informed about EM, based

on the fact that 23.3% said they “need more education”

and 26.7% said, they “do not believe prosecutors know

opinion that prosecutors are not as adequately versed in

the use of EM as is necessary.

Officers Perceptions of EM as a Prison

When asked, “Approximately what percentage of

your EM offenders do you think would likely have been

sentenced to state prison if EM were not available”?

On average, officers believed that 30% of their EM

cases were diverted from prison.

75% of officers believed at least some portion of their

EM cases would have been sentenced to prison.

Are the Most Appropriate Offenders on EM?

caseloads should not be on EM; the median response

• Twenty-five percent believe that 10% or less of their EM

caseloads should not be on EM.

offenders should not be on EM.

follow-up question, “Why should these offenders not be

on EM?” was that some offenders are not considered

dangerous and pose a low risk to the community.

officers think that 20% or more of their non-EM

cases should be on EM, and almost 1 in 4

EM cases would benefit from electronic

Are the Most Appropriate Offenders on EM?

• We then posed the converse of the previous

question to officers by asking, “What percentage

of offenders who were not placed on EM should

• On average, officers believe that 21.8% of their

non-EM caseloads should be on EM; the median

What has the impact of the Statewide Monitoring Center

been on the EM program established in 2007?

Officers – “How has the EM program changed since the

implementation of the Statewide Monitoring Center?”

“One of the best things the Department has done.”

1. EM is an effective community supervision

and reducing the need for costly imprisonment.

2. Florida’s Statewide Monitoring Center has been

an effective EM strategy that has alleviated the

workload of officers significantly. of offenders

5. Assess ways that can reduce the unintended

employment and disruption to their families. 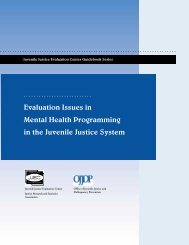 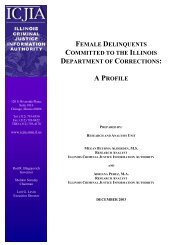 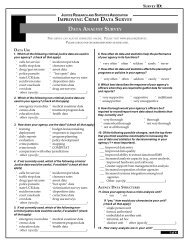 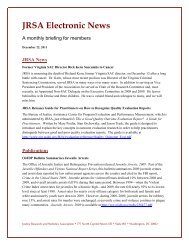 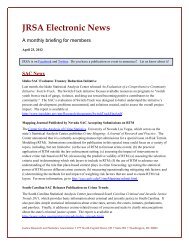 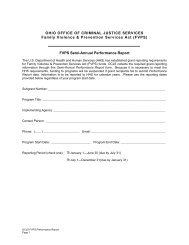 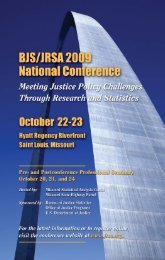 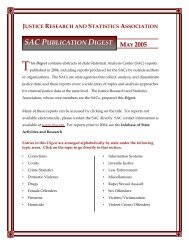 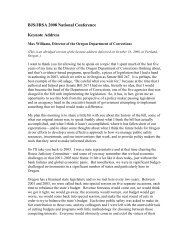 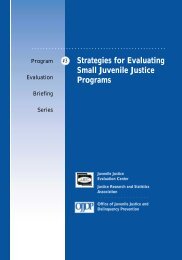 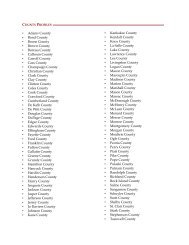 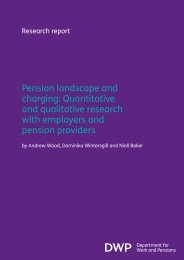 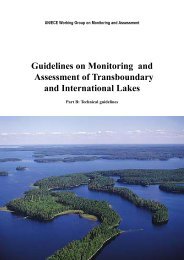 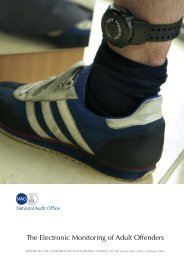 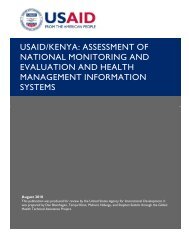 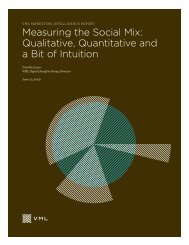 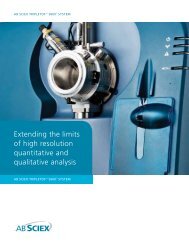 Magazine: A Quantitative and Qualitative Assessment of Electronic Monitoring