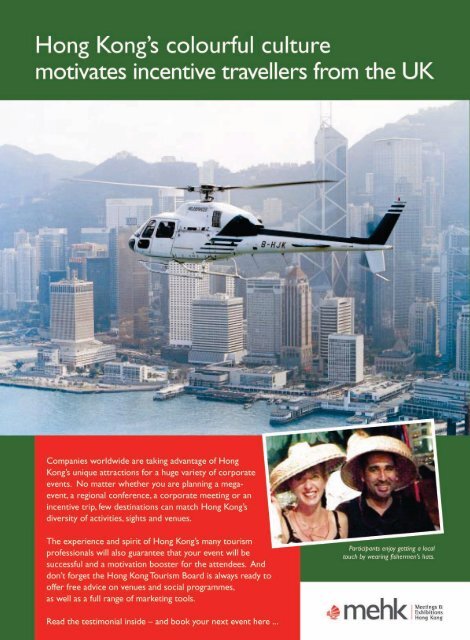 Dinning with a panoramic view of Hong Kong is a spectacular experience.

operator, visited Hong Kong for an

participants won their trip by collecting

so-called “panda points” over the

preceding year, with the winners being

the restaurant managers who had

collected the most points.

“We wanted to increase the managers’

level of performance. Therefore, we

had to pick a destination that was really

attractive. If we offered a trip to, let’s

say, somewhere in England, nobody

would have been motivated. However,

with this adventurous trip to Hong

Kong, we could give them an

experience they had never had before,”

For several years, Tragus has assigned a

For this particular journey, the organiser

shortlisted three to the management:

“Since we were looking for a blend of

action, culture and nightlife, I

immediately felt that Hong Kong was

“Hong Kong offers more than the other

destinations suggested. It has a good

mix of activities and it has a colourful

Furthermore, it is a city full of contrasts,

with some of the tallest buildings in the

world standing proudly not far from

The small fishing town of Tai O is sometimes

described as the “Venice of Hong Kong”.

seems to have stood still.”

After the decision was made, Tragus

initiated an internal campaign and

started work on a detailed programme.

A video about Hong Kong was produced,

showing all the action and variety of

things the city offers. Tragus and the

organiser had a great deal of assistance

from the Hong Kong Tourism Board

by the friendliness of the Hong Kong people.

in London which provided a lot of

The campaign video was shown

internally to the restaurant managers as

inspiration for the contest. Then, for

competed for the best results. The

restaurants were split into 11 regions,

with the regional winners automatically

qualifying for the trip. Others who had

done especially well in the competition

the Café Rouge brand, was among the

“Hong Kong is a city full of contrasts,”

winners. With 86 restaurants in the UK,

Café Rouge is part of the Tragus Group.

but had never been to Hong Kong.

Among the surprises the city held in

store for him were the abundance of

nature and the cleanliness: “Beautiful

greenery, so many islands and – no

He was also impressed by the friendliness

of the Hong Kong people: “They are

always smiling, have a good sense of

humour and never seem to worry. They

are also very polite and eager to help.”

The participants enjoyed a four-day

programme that was peppered with

activities of all kinds, including driving jet

on a beach; helicopter rides; visits to Tai O

tranquil and lovely beaches in less than an hour’s time.

Hong Kong can get

their names written in