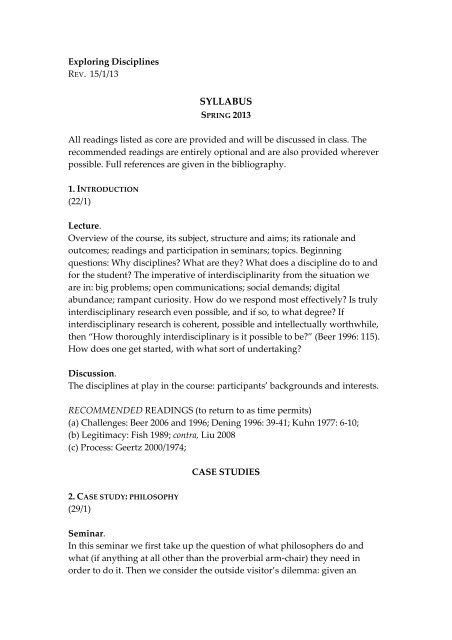 All readings listed as core are provided and will be discussed in class. The

recommended readings are entirely optional and are also provided wherever

possible. Full references are given in the bibliography.

Overview of the course, its subject, structure and aims; its rationale and

questions: Why disciplines? What are they? What does a discipline do to and

for the student? The imperative of interdisciplinarity from the situation we

abundance; rampant curiosity. How do we respond most effectively? Is truly

interdisciplinary research even possible, and if so, to what degree? If

How does one get started, with what sort of undertaking?

The disciplines at play in the course: participants’ backgrounds and interests.

RECOMMENDED READINGS (to return to as time permits)

order to do it. Then we consider the outside visitor’s dilemma: given an

research, “how to distinguish what’s central from what’s peripheral in this

other zone; how to tap into the hinterland of controversy that lies behind the

works on the shelf; how to avoid becoming merely disciples because not in

control of a sufficient range of knowledge” (Beer 2006). What do all the things

under the rubric of “philosophy” have in common?

Ours has often been called the age of biology, for example (according to Ernst

Meyr) by the then-­‐‐President of France, Valéry Giscard d’Estaing. In 1943, just

of biology, then and still unanswered by physics, in What is Life? The Physical

Aspect of the Living Cell. In 1994 the theoretical biologist Robert Rosen pointed

only downward toward subsystems, and never upward and outward” to the

complex phenomena of life – as a fundamental roadblock in our thinking

apace. The question to ask here is, how do biologists investigate the

complexity of living forms systematically, as a science? What kind of a science

is it? What is the science of life?

away from the moralizing tendency of his discipline, championed a scientific

approach and declared that its purpose should be to demonstrate was

und germanischen Völker, 1874, vii). Much has subsequently been found

wanting in his formulation, but it retains more than a grain of truth. The

question is, once the historian has decided what eigentlich means, how is

history written? The vulgar understanding is that it mostly involves assembly

of facts; these, as the historian will know, are only the beginning and can be

only a minor part of the problem. So the task here is to understand the theory

of history-­‐‐writing (historiography): how one writes a history relevant to one’s

own time that is also faithful to the past. What kind of stories does history

What do scholars of literature do? What do they need to do it, apart from texts

to read (which some theoreticians don’t seem to need at all)? What sort of

texts do they focus on, what else do they bring into play, how do they justify

their practices? Here we specifically focus on the interrelations of

critic/reader, the style or theory involved and the text. Indeed, what is “text”

to the critic? Is it, as some have said, everything? And, if so, what is or where

is this everything? Is it strictly words-­‐‐on-­‐‐the-­‐‐page? Something in between?

What does the study of literature have to do with life? (See, for example, the

one way or another affected nearly all aspects of urban living, commerce, the

military, government and academic study. The origins of computer science as

a distinct academic discipline date to the 1950s and early 1960s. Since then CS

has grown spectacularly, diversifying into all manner of specialisms. Its

nature as an “amalgam of mathematical theory, engineering practice, and

computing spread to the humanities; the first journal, Computers and the

Humanities, was founded in 1966. The field we now call the “digital

humanities” was a beleaguered concern of a small minority, but with the

growth of the Web from the mid 1990s, and especially since the early years of

this century, it has gained widespread attention and disciplinary self-­‐awareness.

In the sciences computational models have become so intrinsic to

understanding of the natural world. The humanities are similarly though

more slowly becoming dependent on computing, not only for access to basic

are in cultural anthropology, critical theory and Marxist literary criticism,

knowledge is political. Its influence has been enormous – thus the “cultural

turn” in several disciplines of the humanities, especially perhaps in literary

studies. Recently the field known as “cultural research” has grown out of and

away from it. At the same time the “creative industries” have developed in a

somewhat different direction but with very similar emphasis on

amount of the evidence in the process of bringing it (often literally) to light.

How does this fact shape the practice? But archaeology also ventures

considerably beyond physical to metaphorical excavation of artefacts from the

obscurity of our ignorance about them, to infer long-­‐‐ago practical, cultural

and cognitive contexts. Hence it reaches into other disciplines for help.

Epigraphers and archaeologists work together, as their fields overlap, but the

former do not destroy in order to discover; rather, they are motivated by the

need to report on inscriptions they have seen, so that scholars may know

about them and their contents before weather or worse has destroyed them.

interest. Other contingencies on the practice of both are the political and

national sensitivities to ancient artefacts in some parts of the world, the

some places and their vulnerability in times of conflict.

Ang, Ien. 2006. “From cultural studies to cultural research: Engaged Scholarship in the

Also in Everyman His Own Historian: Essays on History and Politics. 233-­‐‐55. Chicago:

Burke, Peter. 1992. “Overture: the New History, its Past and its Future”. New Perspectives on

Deetz, James. 1967. “What is Archaeology?” and “Archaeology Tomorrow”. In Invitation to

Perspective”. In Cognition and Material Culture: an Archaeology of Symbolic Storage. Ed. Colin

Anthropological Understanding”. Bulletin of the American Academy of Arts and Sciences 28.1;

Gould, Stephen Jay. 1971. “D’Arcy Thompson and the Science of Form”. Form and its

Critique of the Adaptationist Programme”. Proceedings of the Royal Society of London. Series

Hanley, Lynsey. 2009. “Introduction”. In The Uses of Literacy: Aspects of Working Class Life by

Hartog, François. 2000. “The Invention of History: The Pre-­‐‐History of a Concept from Homer

Hoffmeyer, Jesper. 2000. “The Biology of Signification”. Perspectives in Biology and Medicine

Hoggart, Richard. 1957. The uses of literacy: Aspects of working-­‐‐class life, with special references to

Jameson, Fredric. 1991/1984. “Postmodernism, or The Cultural Logic of Late Capitalism”. In

Konner, Melvin. 1991. “Human nature and culture: The residue of uniqueness”. In The

Kuhn, Thomas S. 1977. “The Relations between the History and Philosophy of Science”. In

Postmodern Historicism and the Database. Chicago: University of Chicago Press.

McCorduck, Pamela. 1979. Machines Who Think: A Personal Inquiry into the History and

McGann, Jerome. 1993. “The Truth of Poetry. An Argument”. In Black Riders: The Visible

Mindell, David. 2002. Between Human and Machine: Feedback, Control, and Computing before

Monod, Jacques. 1972. Chance and Necessity: An Essay on the Natural Philosophy of Modern

England”. In Cultural industries and the production of culture, ed. Dominic Power and

Renfrew, Colin. 1994. “Towards a cognitive archaeology”. In The ancient mind: Elements of

Renfrew, Colin and Paul Bahn. 2000. “The Nature and Aims of Archaeology”. In Archaeology:

Ritterbush, Philip C. 1970. “The Shape of Things Seen: The Interpretation of Form in Biology”.

Shepard, Paul. 1996. The Others: How Animals Made Us Human. Washington DC: Island Press /

Tanselle, G. Thomas. 1989. “Reconstructing the Texts of Works”. In A Rationale of Textual

Terkel, Studs. 2004/1972. Working: People talk about what they do all day and how they feel about

what they do. New York: The New Press.

Vermeule, Emily. 1996. “Archaeology and Philology: The Dirt and the Word”. Transactions of

White, Hayden. 1980. “The Value of Narrativity in the Representation of Reality”. Critical

Exploring Disciplines REV. 15/1/13 SYLLABUS SPRING 2013 All readings listed as core are provided and will be discussed in class. The recommended readings are entirely optional and are also provided wherever possible. Full references are given in the bibliography. 1. INTRODUCTION (22/1) Lecture. Overview of the course, its subject, structure and aims; its rationale and outcomes; readings and participation in seminars; topics. Beginning questions: Why disciplines? What are they? What does a discipline do to and for the student? The imperative of interdisciplinarity from the situation we are in: big problems; open communications; social demands; digital abundance; rampant curiosity. How do we respond most effectively? Is truly interdisciplinary research even possible, and if so, to what degree? If interdisciplinary research is coherent, possible and intellectually worthwhile, then “How thoroughly interdisciplinary is it possible to be?” (Beer 1996: 115). How does one get started, with what sort of undertaking? Discussion. The disciplines at play in the course: participants’ backgrounds and interests. RECOMMENDED READINGS (to return to as time permits) (a) Challenges: Beer 2006 and 1996; Dening 1996: 39-­‐‐41; Kuhn 1977: 6-­‐‐10; (b) Legitimacy: Fish 1989; contra, Liu 2008 (c) Process: Geertz 2000/1974; CASE STUDIES 2. CASE STUDY: PHILOSOPHY (29/1) Seminar. In this seminar we first take up the question of what philosophers do and what (if anything at all other than the proverbial arm-­‐‐chair) they need in order to do it. Then we consider the outside visitor’s dilemma: given an 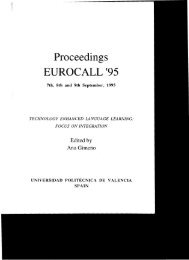 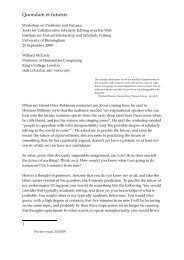 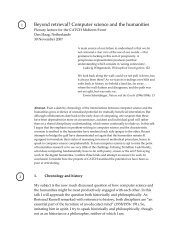 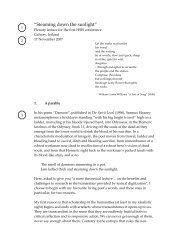 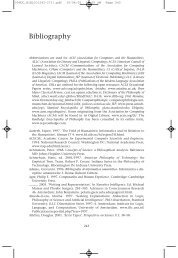 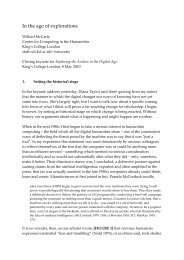 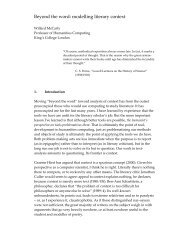 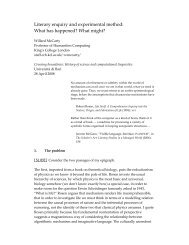