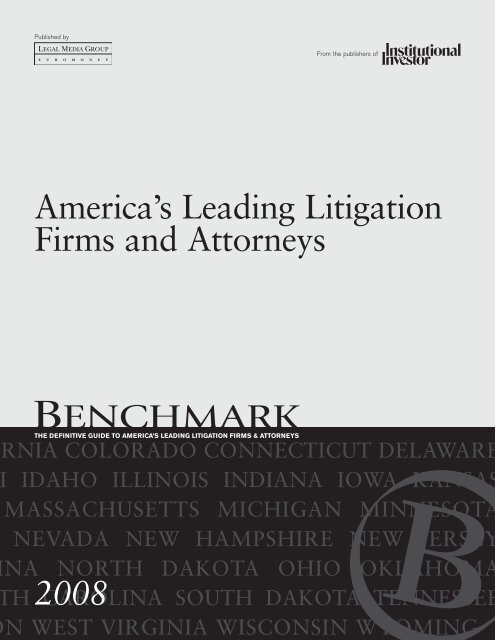 From the publishers of

almost 200 lawyers in its sole office in

Manhattan, and was described by one

competitor as “a low-profile firm with

quality people and a great reputation.”

Clients overwhelmingly agree, and are eager

to sing the firm’s praises. One client

explained that “one of the best things about

Patterson Belknap is that it’s a very selective

firm and maintains quality control, so the

depth and strength of the teams is

extraordinary.” Another client attested that

“everyone at the firm is outstanding, we’ve

for its intellectual property and media and

in a range of these matters. Other main

practice areas include white-collar crime and

government investigations, and chair of the

Gardephe is representing the Associated Press

regarding the 2005 arrest and detention by

Bilal Hussein, despite the military’s failure to

charge Bilal with a crime or present evidence

against him. Gardephe traveled to Iraq to

research the case in early 2007. Judge

Michael Mukasey rejoined the firm in

September 2006, after having served as Chief

Judge of the US District Court for the

Southern District of New York, and he and

partner Saul Shapiro were characterized as

described as “a first-rate trial lawyer and a

great strategist” by one client, and he focuses

in antitrust, patent and general commercial

litigation. He is representing Wells Fargo and

achieved a substantial settlement for a loyal

client of the firm, TAP Pharmaceuticals.

one client as “the brains behind the

Managing partner and co-chair of the firm,

Robert “Bob” LoBue, was hailed by another

client as “terrific, not just for litigation, but

for avoiding it.” LoBue was also described by

clients as being “first-rate and responsive”

with “a clear sense of the difference between

legal and business issues and the ability to

gets it.” Senior partner Gregory Diskant

property and securities litigation, and one

client commended him as having “a

tremendous desire to be the best” and being

“astounding in patent work,” adding that

“he has an incredible resume, but he’s

unassuming and takes in a lot of

in intellectual property, false advertising and

complex commercial matters, and in 2006

obtained a series of rulings in six states

denying certification of putative classes of

consumers who alleged that they had been

deceived by his client’s advertisements.

Other recent cases include the firm’s more

than six-year representation of Cendant in its

litigation with Ernst & Young, a victory for

Johnson & Johnson regarding its average

Boston and a continuing reputation for

defending some of the nation’s largest law

The definitive guide to America’s leading litigation firms and attorneys