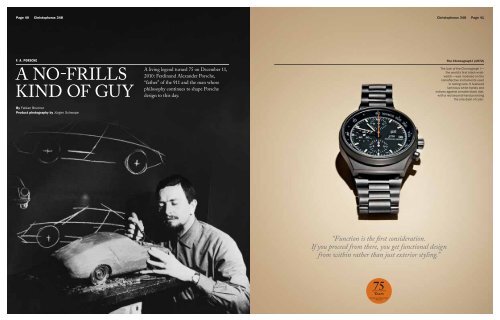 A living legend turned 75 on December 11,

design to this day.

The look of the Chronograph I—

in racing cars. It featured

indices against a matte black dial,

with a red second-hand providing

the only dash of color.

“Function is the first consideration.

If you proceed from there, you get functional design

from within rather than just exterior styling.”

end, I’m always also making them for myself.”

His no-frills approach is as evident in the clean lines

he goes by: Professor Ferdinand Alexander—better

known simply as F. A.—Porsche. It is equally manifested

in the wording of the pronouncements in which his

design philosophy is encapsulated, such as “design has

to be honest” and “our products show what they can

do.” F. A. Porsche, who celebrated his 75th birthday

in December, has shaped the signature Porsche look

more than any other single person. To his mind, design

is about more than just looks or mere faddishness.

Above all, he believes design should never be gimmicky

or an end unto itself. And although he withdrew from

the day-to-day business of the company that bears his

name in the early 1970s, that uncompromising philosophy

continues to inspire every product marketed under

the name Porsche to this very day.

on the design of the

Aviator shades are among the

most popular kinds of sunglasses

in the world. Thirty years after

its fi rst aviators, it reissued

the charac teristic look of the

1970s with the contemporary

which makes these sunglasses

F. A. Porsche is widely regarded as a brilliant designer,

and he has received numerous honors and awards

over the course of his long and productive career. He

is a purist, and his designs are characterized by timeless

ele gance. Rather than chafing at the constraints

imposed by the principle of “form follows function,”

Ferry Porsche and his son F. A. in front of a portrait

he has always considered it a spur to his creativity and

a challenge to be relished. What makes his work so

fascinating is that the rational, no-nonsense approach

he takes to realizing his ideas produces results that

elicit such ardent enthusiasm. When F. A. introduced

“his” first Porsche 911 (which was then known as the

its flowing lines and graceful curves by saying, “I

“Absolutely neutral”… well, that did not quite pan out.

Even today, almost half a century later, the evolved 911

is still one of the most “emotional” cars the automobile

industry has ever produced. But F. A. Porsche is not just

the father of the 911; he also designed all Porsche race

all the Porsche 904 Carrera GTS, widely regarded by

automobile buffs as one of the most beautiful race cars

F. A. Porsche came to the realization that design is inextricably

linked to technology at an early age. Born in

and Dorothea Porsche’s four sons, he spent a lot of time

as a child in the design offices and development workshops

of his grandfather, Ferdinand Porsche. In 1943

the result of combining tradition and

The striking cooling fi ns on

this pipe were inspired by the

engines. They create a larger

surface area so that the pipe

smoked and the tobacco has

“Durability is a hallmark of good quality—and the basis

for durability is excellent workmanship.”

the family and the company relocated to Austria, and

F. A. Porsche spent the next seven years attending school

in Zell am See. After returning to Stuttgart in 1950, he

finished at the local Waldorf school and enrolled at the

College of Design in Ulm. In 1958, he began working

for the family business and soon established a reputation

Although F. A. Porsche and all the other family members

withdrew from the operational business of Porsche

KG when it was converted into a publicly traded company

fortunes. As a shareholder and member of the

supervisory board, he oversaw the development of

the newly established Porsche AG for many years and

served as the chair of the supervisory board from 1990

as a Porsche AG supervisory board member to his son

Oliver, and became honorary chair of the board.

the design for one

“My work as a designer is based on my own,

a fundamental willingness to question everything

and take full advantage of the latitude that that gives

you, as conscientiously as possible.”

Throughout his career, however, design remained

F. A.’s true passion, and he founded the subsidiary

Porsche Design in 1972 in Stuttgart. Two years later, he

moved the company to Zell am See in Austria. With its

spectacular views of the lake and the majestic Kitzsteinhorn

and Grossglockner peaks serving as a source of

inspiration, the town where he spent his youth proved

to be the perfect environment for creativity to blossom.

In the decades that followed, F. A. applied his prodigal

such as watches, eyeglasses, and writing implements,

which won the Porsche Design brand an international

Porsche Design caused quite a stir when it launched the

in 1972. The Chronograph I has long been regarded a

classic and today is a highly coveted collector’s item. It

is also a perfect poster child for F. A. Porsche’s design

philosophy. The way he saw it, it was much more than

just a decorative item of jewelry; it was a precision instrument.

Accordingly, he modeled its look on that of

the nonreflective instruments used in racing cars. After

this milestone in watch design, F. A. Porsche and his

from all over the world.

order to tap the potential of the Porsche name in sectors

beyond the automobile. Its focus is on the Porsche Design

trademark, which has its own marketing network

located in Zell am See, but it is now housed in a more

designing everything from sunglasses, watches, and

shoes to a “kitchen for men,” yachts, and even the interior

of a luxury catamaran. But even as the company

continues to grow and evolve, in keeping with its founder’s

spirit, one thing will probably never change: F. A.

Porsche’s office in the Design Studio has remained untouched

and looks as if this most gifted of designers will

be returning to his desk any minute.

True to the spirit of Porsche Design Studio’s

founder, Roland Heiler and his team in

they make items that owners will cherish for

There’s a lot of F. A. Porsche in every Porsche

model. This should come as no surprise. As

department in Weissach, points out, the 911

is the basis for the brand’s “design DNA” — and

When Roland Heiler is asked about the approach he

and his team take to their work, the head of the Porsche

Design Studio in Zell am See likes to use the TecFlex

P’3110 ballpoint pen as an example. Its distinctive

sheath is made of high-grade stainless-steel braided hose

of the type used to sheath brake lines and electrics on

beautifully from the world of racing to the realm of

writing instruments. It does not corrode, ensuring durability,

and it feels great to the touch. But that is not all.

Its flexibility has been harnessed to add functionality:

to retract the ballpoint, one simply compresses the pen

along its axis—the steel weave flexes and contracts accordingly.

We believe in credible, authentic design.”

The rules are clear, the standard is high. The Porsche

Design Studio has always had a reputation for distinctive

design of timeless elegance. “We want to make

products that will stand the test of time,” says Heiler,

“the kind that are passed down to the next generation.”

The criteria to be applied in this endeavor were set down

in writing by F. A. Porsche himself. Within the company,

these rules are known as the “ten commandments.”

But while everyone working in Zell am See is expected

to be familiar with them, these “commandments” are

not written in stone; the designers are encouraged to

give their creativity free rein and think outside the box,

of scope to design pretty much anything—the Design

Studio team even designed a dentist’s chair once.

The world of Porsche Design has traditionally been

dominated by men, but that is gradually changing. As

designers, because a lot of women find our products

appealing.” The company is committed to maintaining

its high standards and proud tradition in the future

while remaining innovative and evolving with the times.

One way it has been working toward these goals in recent

years is by systematically fostering and promoting

As diverse as the activities of the Porsche Design Studio

are, the shared heritage and relationship with Porsche

cars are always discernible. As Heiler puts it, “Our affinity

with the automobile designers at Style Porsche

is manifested not only in the forms and shapes of our

products, but in our entire approach.”

The head of the

with a shoe created

Of all the prizes the automobile designers at Porsche

have been awarded over the years, one that made

the Springer publishing house’s designation of the

new Cayenne as a “Future Classic.” “To launch a new

car onto the market that’s deemed an instant classic is

every automobile designer’s dream,” he says.

And indeed, with its compellingly timeless design,

the team at Style Porsche in Weissach has proven time

and again that it can do the seemingly impossible: create

cars that are supremely functional, yet surprising;

always fresh, yet never gimmicky or faddish. Each

model is distinctive, yet the signature Porsche look is

puts it this way: “Everyone working at Style Porsche

has to be able to walk the tightrope between introducing

successfully because it follows the blueprint set out

in the Porsche Design DNA, which goes back to the

godfather of all Porsche models: the 911. The ultimate

classic car, the 911 is the yardstick by which

all Porsche models are measured in terms of lines,

proportions, and certain style features to this day.

lot of him in every Porsche,” says Mauer.

than that. Mauer regards his statement that “our

products show what they can do” as nothing short of

that “honest design” is the key to the enduring success

of the Porsche brand. Of course, functionality cannot

be the sole criterion when it comes to maintaining

a distinctive brand identity, but it is nevertheless always

a chief consideration at Porsche. As Mauer says,

“Many of the cars we build can reach top speeds of

we design serve an important purpose. And our wheel

rims are not only handsome; they’re also lightweight

and show off the brakes and thus the high degree of

safety that our vehicles offer.”

Michael Mauer likes to surround himself with classic

design at home, as well. He already owns a Porsche

Design toaster and coffee-maker, and he has been

hunting for an original Chronograph I for years.

“That watch was real dynamite.”

Back to the roots

and into the future

Porsche, with a model

Page 40 Christophorus 348 Christophorus 348 Page 41 F. A. PORSCHE A NO-FRILLS KIND OF GUY By Fabian Brunner Product photography by Jürgen Schwope A living legend turned 75 on December 11, 2010: Ferdinand Alexander <strong>Porsche</strong>, “father” of the 911 and the man whose philosophy continues to shape <strong>Porsche</strong> design to this day. The Chronograph I (1972) The look of the Chronograph I— the world’s fi rst black wristwatch—was modeled on the nonrefl ective instruments used in racing cars. It featured luminous white hands and indices against a matte black dial, with a red second-hand providing the only dash of color. “Function is the first consideration. If you proceed from there, you get functional design from within rather than just exterior styling.” 75 Years Ferdinand Alexander <strong>Porsche</strong> 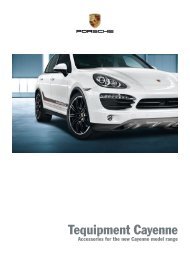 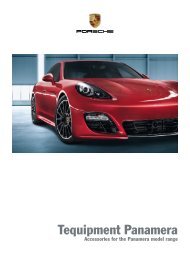 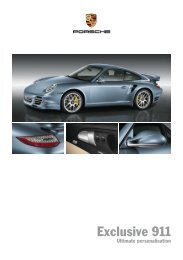 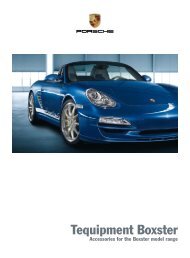 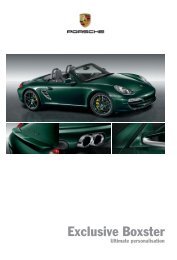 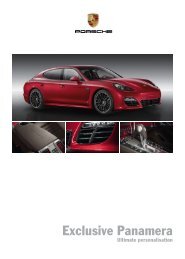 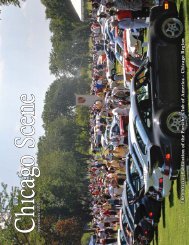 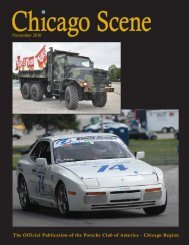 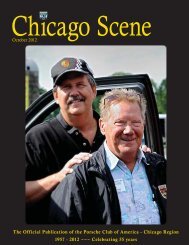 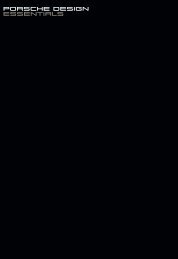 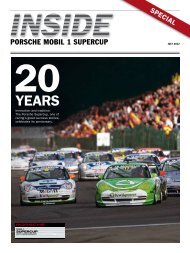 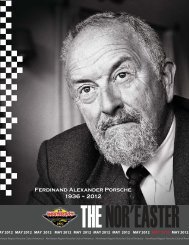 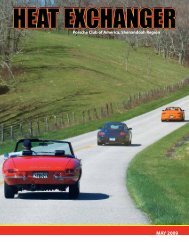 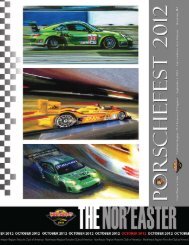 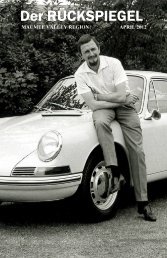