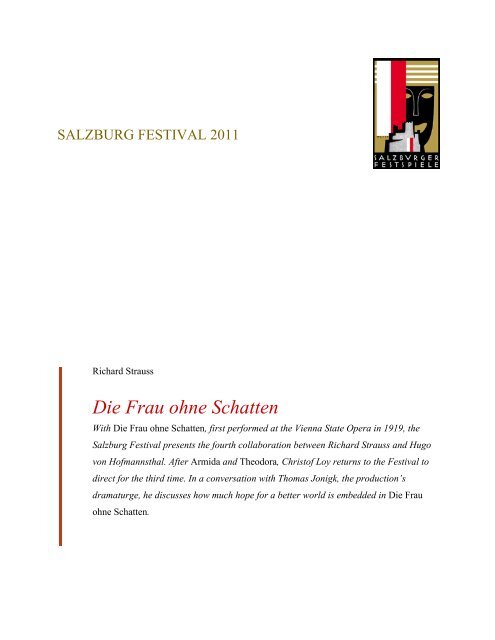 With Die Frau ohne Schatten, first performed at the Vienna State Opera in 1919, the

von Hofmannsthal. After Armida and Theodora, Christof Loy returns to the Festival to

direct for the third time. In a conversation with Thomas Jonigk, the production’s

dramaturge, he discusses how much hope for a better world is embedded in Die Frau

Der Rosenkavalier as well as Intermezzo. Why is Die Frau ohne Schatten the next step?

between conformity and the wish to “transform” themselves, as Hofmannsthal would say, are

very much in line with my interests as a stage director. Ultimately, the Strauss works I have

directed so far are chamber plays – especially Intermezzo, for which the composer himself wrote

a very successful libretto. I was intrigued by the invitation from Salzburg because I want to find

out how much “chamber play” is in Die Frau ohne Schatten.

The piece is highly complex, in terms of music and content: on the one hand, it is a fairytale

charged with mythological aspects, and on the other hand, a psychological social drama. Any

piece. What is your approach to this work?

In all the pieces I direct, I look for an identification figure, one that allows me to enter the piece’s

world. In Die Frau ohne Schatten, this turned out to be the Empress. A figure that plays an

almost silent, observing role initially, collecting impressions like a quiet child, and then, at the

moment when she feels that decisions are expected of her, becomes almost a female Christ-like

figure. I think that one can only understand the piece if one follows the Empress. She makes

incredible demands on herself at the moment of insight, which, to her, is automatically connected

with the responsibility to act. After that, it was a question of finding a context in which this

figure’s path can be understood by a contemporary audience.

Studying the performance history of the work, I stumbled across the incredible fact that in 1955,

Frau ohne Schatten – in the middle of winter, in unheated rehearsal spaces and without fees! In

that city of Vienna, where the shadows of World War II and the preceding time loomed large,

young Leonie Rysanek as the Empress encountered Elisabeth Höngen, a star of the 1940s, as the

Nurse. Past and future met in a present that had been ripped open. This forms the background for

our version of the drama of people who learn to recognize guilt and responsibility.

The shadow as such is a familiar motif from cultural history and an archetype, and the loss of

one’s shadow is a frequent topic in fairytales and literature. In Adelbert von Chamisso’s Peter

Schlemihl, the title figure is cast out because the loss of one’s shadow is equal to the loss of

one’s human essence. In Die Frau ohne Schatten, the tale is similar; and yet it reaches far

In the piece, having a shadow is the same as the ability to conceive and bear children. The

unreal relationship with a man who hides her from people, out of egoism and jealousy. Her

a shadow. The experiences she must endure remind me of Indra’s daughter from Strindberg’s

Dream Play. It is a painful journey, but for the Empress, it ends more happily than for Indra’s

daughter. This is a utopian story with the desirable content that only those who are aware of the

dignity and preciousness of life should be allowed to bring life into the world.

The final apotheosis, in which marriage between man and woman for the sake of reproduction

pointlessness and depression, seems anachronistic or even reactionary. How do you deal with

Throughout the piece, the Empress and the other protagonists endure experiences that bring them

to the limit of what is bearable. The voices of the unborn persecute and admonish them like the

voices of dead people; they must learn that the only way to have a future is to study the past.

Indeed, the hope for a new world where people encounter each other as mature and responsible

adults is portrayed by Strauss at the end of the opera in such an opulent way, with such a wealth

of beautiful sound, that one feels intimidated by such magnificence. Here, I am searching for an

itself in a complacent and almost monstrous comfortableness.