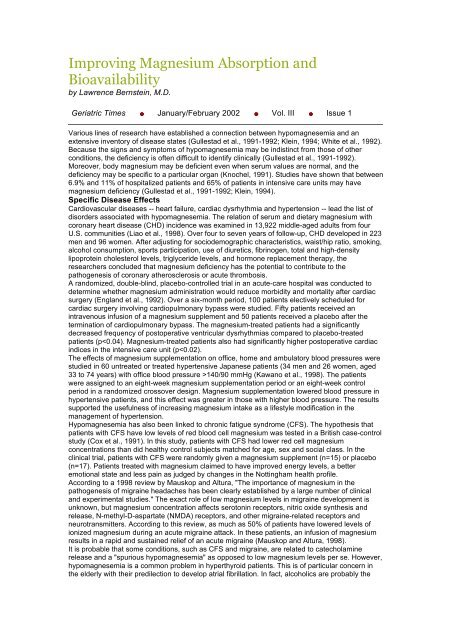 Moreover, body magnesium may be deficient even when serum values are normal, and the

deficiency may be specific to a particular organ (Knochel, 1991). Studies have shown that between

6.9% and 11% of hospitalized patients and 65% of patients in intensive care units may have

disorders associated with hypomagnesemia. The relation of serum and dietary magnesium with

A randomized, double-blind, placebo-controlled trial in an acute-care hospital was conducted to

determine whether magnesium administration would reduce morbidity and mortality after cardiac

termination of cardiopulmonary bypass. The magnesium-treated patients had a significantly

complications associated with the disease. A study of 23 children with diabetes found that their

osteocalcin were lower than those of control subjects (Saggese et al., 1991). All patients were

given 6 mg/kg daily (orally) of elemental magnesium for up to 60 days. During treatment, all

that put the elderly at greater risk for magnesium deficiency (Klein, 1994). Therapy with thiazide or

further stress their mineral balance. Hypokalemia can be a problem in the elderly population, and

Klein (1994) reported finding hypomagnesemia in 38% to 42% of hypokalemic patients. Because

also corrected, patients with hypokalemia should also be evaluated for magnesium deficiency. The

elderly are also vulnerable to hypomagnesemia-induced malabsorption syndromes and

vegetables, nuts, coffee, chocolate and milk. Although these foods are readily available, some

individuals do not consume adequate quantities to satisfy the daily nutritional requirement.

century (Klein, 1994). Thus, continued use of an oral magnesium supplement that offers reliable

absorption and bioavailability is recommended for people with magnesium deficiency (White et al.,

1992). Oral magnesium supplements are available in a number of formulations that utilize a

different anion or salt -- such as oxide, gluconate, chloride or lactate dihydrate (Klein, 1994).

However, these preparations are not interchangeable because they have differences in absorption

Magnesium is absorbed primarily in the distal small intestine, and healthy people absorb

magnesium is predominately an intracellularcation, the effectiveness of the oral supplement is

its transfer into the tissues. Magnesium balance is regulated by the kidneys (White et al., 1992).

When magnesium levels in the blood are high, the kidneys will rapidly excrete the surplus. When

magnesium intake is low, on the other hand, renal excretion drops to 0.5 mmol to 1 mmol (1 mEq

need to be carefully monitored for the potential of magnesium intoxication.

magnesium citrate did not occur when the hydrochloric acid was titrated to a pH between 6 and 7,

which is the pH of the distal small intestine where magnesium anions are absorbed. Absorption of

magnesium levels, and the citrate form was absorbed to a much greater extent than the oxide.

contrast, another study focused on the effects of magnesium supplementation in 40 elderly

al., 1991-1992). The oral magnesium lactate-citrate preparation was given for six weeks at a daily

dose of 15 mmol; the IV magnesium sulfate formulation was given at a daily dose of 30 mmol as

an infusion in 1000 mL of saline for seven days. The two routes of magnesium administration

dihydrate in 24 patients (Kann, 1989). The patients received 21 mEq of the sustained-release

preparation at 8 a.m. and 2 p.m. on the third day of the study after consuming a low-magnesium

diet for two days. Blood samples were collected on day 2 and after the initial dose (day 3), and

urine was collected for four continuous days. Statistical data showed that the participants

absorbed 41% of the oral dose with no serious adverse reactions. In a study with dogs,

anion, and decreased acidity did not impair its bioavailability (Robbins et al., 1989).

Magnesium deficiency has been linked to a growing number of disease states. When

hypomagnesemia is detected, the appropriate course of action consists of addressing the

underlying cause (if identifiable) and reversing the depleted state. Oral magnesium supplements

constitute an effective form of replacement therapy, but not all formulations are equal. Absorption

and bioavailability of preparations vary, as do concomitant side effects. Various investigators have

reported that magnesium L-lactate dihydrate, which is available in a sustained-release formulation,

ensures maximal absorption in the distal small intestine. The solubility and bioavailability of

magnesium L-lactate dihydrate are higher than those of other magnesium formulations, and the

He is responsible for patients in the nursing home, subacute care, assisted living, adult

heart disease? The Atherosclerosis Risk in the Communities (ARIC) Study. Am Heart J

Mauskop A, Altura BM (1998), Role of magnesium in the pathogenesis and treatment of