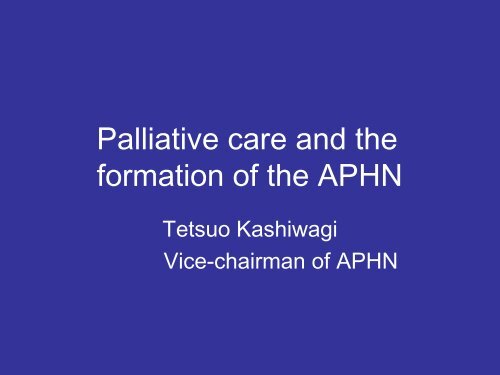 Palliative care and the

(APHN) was established to empower and supporting

individuals and organisations committed to alleviating

suffering from life-threatening illness in Asia and the

Pacific. Established programs are encouraged to

countries have registered with the Asia Pacific

• To facilitate the development of hospice and palliative

bodies) and other relevant initiatives

• To promote professional and public education in

• To enhance communication and dissemination of

• To foster research and collaborative activities

• To encourage co-operation with local, regional and

The Asia Pacific Hospice Palliative Care Network is the

realization of the vision and generosity of Dr Shigeaki

Hinohara, Chairman of the Life Planning Centre in

hosted in Japan by the Life Planning Centre at the

Taiwan. The aim of this forum was to provide an

knowledge and concerns for the future.

Some of these concerns included the need to

gain medical and public acceptance for the

concept of hospice, problems related to the

and issues relating to funding of services.

culturally relevant education, and the

maintenance of voluntary and community

involvement in the implementation of hospice

Delegates expressed a sense of

isolation and agreed that, if better

communication could be established

within the region, they could do much to

help each other by sharing educational

resources and offering support. The

concept of the Network was born from

The second APHN meeting was held in Japan in

February 1997. In addition to delegates from the

Philippines were included. Later that year in

November, the third meeting was held in Hong Kong.

Discussions now took place as to whether the

organisation should be formalised. It was suggested

that issues such as a constitution, registration and

funding for the new organization should be raised at

Vietnam and India were invited for the first time. Discussions

centred on the need for APHN to be a legally registered

organisation with a secretariat. After three days of discussion it

Rosalie Shaw be invited to take up the position of Executive

meeting of the APHN in Hong Kong in

May 1999 prior to the Third Asia Pacific

Hospice Conference. At this meeting it

was decided that the name of the

organization would be the Asia Pacific

that APHN would continue to be used

as the abbreviated form.

At that time, organizations in Singapore

(Singapore Hospice Council and the

Society for the Promotion of Hospice

generous donations to allow the APHN

In May 1999 the Secretariat was set up in

Singapore in the Department of Palliative

Medicine at the National Cancer Centre and

work proceeded on drawing up the

again in Singapore in October 2000 prior to

the APHN being registered with Registrar of

before the Fourth Asia Pacific HospiceConference. At that meeting the

First Council of 20 members was appointed with Professor Tetsuo

Kashiwagi as the Inaugural Chairman. Dr Shigeaki Hinohara was

invited to be the Patron of the APHN. There were fourteen Founding

Taiwan, Thailand and Vietnam. A Sector is a geographic region which

may include one or more countries, or part of a country. More Sectors

established in other countries.

Hospice and PCU in Japan

1981 Establishment of the first hospice facility

1996 Establishment of the Japanese Society for

2008 Commencement of the national grant for 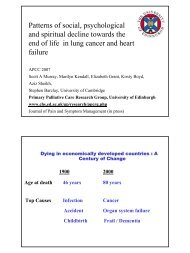 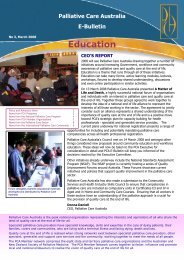 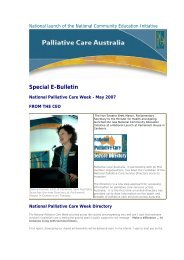 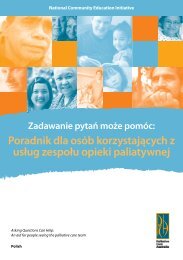 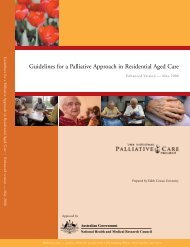 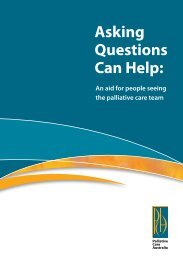 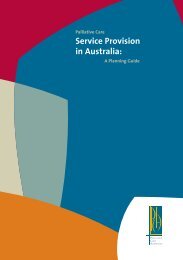 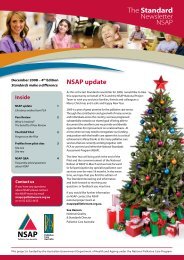 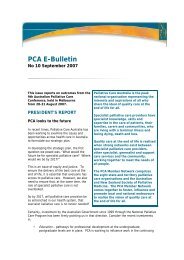 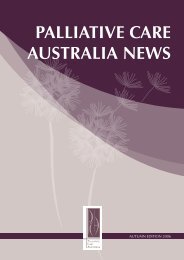