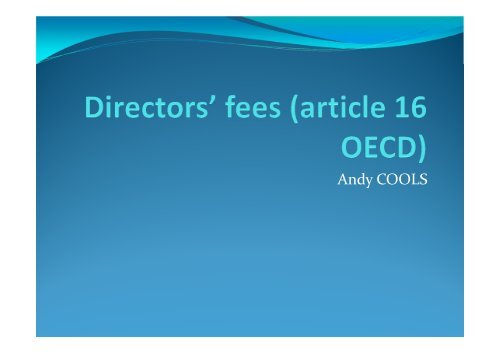 “Directors’ fees and other similar payments derived by a

resident of a Contracting State in his capacity as a

member of the board of directors of a company which is

a resident of the other Contracting State may be taxed

in that other State.”

This article relates to remuneration received by a

resident of a state, whether an individual or a legal

person, in the capacity of a member of a board of

directors of a company which is a resident of the other

where the services are performed, the provision treats

the services as performed in the state of residence of

The wording of the OECD Model Tax Convention and

But: UN MC, in addition, has a second paragraph with

a provision on payments in respects of top level

managerial positions of a company.

The US MC contains also a provision corresponding to

Convention). Difference = services rendered in the

Some terms are not obvious (Director? Fee? Board of

Interpretation is an art which itself is subject to legal

The starting point for tax treaty interpretation is the

question which standards apply for the interpretation

of international law in general (Convention of Vienna)

A. What kind of companies?

Commentaries 3/22: The term "company" means in the first

place any body corporate. In addition, the term covers

any other taxable unit that is treated as a body corporate

according to the tax laws of the Contracting State in which

it is organised. The definition is drafted with special regard

to the article on dividends. The term "company" has a

bearing only on that Article, paragraph 7 of Article 5, and

=> Only directors of companies who are subject to

corporate tax are “directors”. So, for the

Conclusion: not only companies who are subject to corporate tax.

Definition of “resident”. Cross border situation is necessary for the

application of a double tax convention. = state of company’s residence

=> The Netherlands: Incorporation docrine: application of the legal

system where the company is incorporated. (Also Sweden, Austria, …)

B. What kind of directors?

What is a “member of the board of directors”? The MC failed to define

the term. = domestic law. In origin only supervisory functions.

A lot of deviatons of the OECD Model tax treaty. F.e. similar organ as

the board of directors, … = comparable organs. In some countries

of directors. Contracting states are free to include in bilateral

conventions such organs of companies under a provision

= context (reference in the common interpretation of the convention).

Director : formal but also material (every independent manager of the

company with a technical, financial of commercial task).

Only such remuneration falls within the scope of the article

share in the company’s profits or in both forms side by side.

If however, the member of a board of directors is also a

shareholder of the company concerned, it should be noted

that any remuneration dependent on the profits made by

the company might be considered to be distributions in

respect of his interest in the company, i.e. dividends, at

least under the law of some countries.

Other functions: a member of the board of directors of

a company often also has other functions with the

consultant, etc. It is clear that the article does not

apply to remuneration paid to such a person on

BUT: Belgium: force of attraction. Also in new double

tax treaty with the Netherlands?

Fictitious income? Only when permitted in context? Is 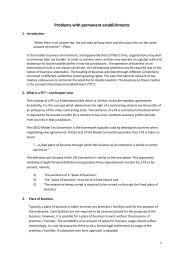 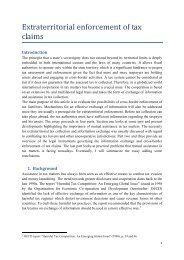 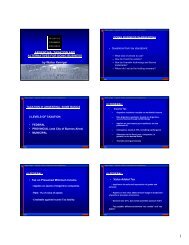 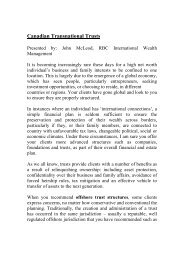 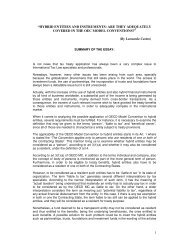