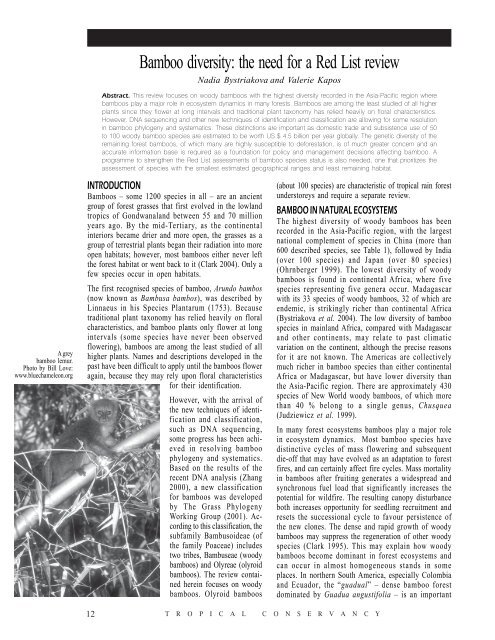 Bamboo diversity: the need for a Red List review

Abstract. This review focuses on woody bamboos with the highest diversity recorded in the Asia-Pacific region where

bamboos play a major role in ecosystem dynamics in many forests. Bamboos are among the least studied of all higher

plants since they flower at long intervals and traditional plant taxonomy has relied heavily on floral characteristics.

However, DNA sequencing and other new techniques of identification and classification are allowing for some resolution

in bamboo phylogeny and systematics. These distinctions are important as domestic trade and subsistence use of 50

to 100 woody bamboo species are estimated to be worth US $ 4.5 billion per year globally. The genetic diversity of the

remaining forest bamboos, of which many are highly susceptible to deforestation, is of much greater concern and an

accurate information base is required as a foundation for policy and management decisions affecting bamboo. A

programme to strengthen the Red List assessments of bamboo species status is also needed, one that prioritizes the

assessment of species with the smallest estimated geographical ranges and least remaining habitat.

group of forest grasses that first evolved in the lowland

tropics of Gondwanaland between 55 and 70 million

years ago. By the mid-Tertiary, as the continental

interiors became drier and more open, the grasses as a

group of terrestrial plants began their radiation into more

open habitats; however, most bamboos either never left

(now known as Bambusa bambos), was described by

Linnaeus in his Species Plantarum (1753). Because

characteristics, and bamboo plants only flower at long

intervals (some species have never been observed

flowering), bamboos are among the least studied of all

higher plants. Names and descriptions developed in the

past have been difficult to apply until the bamboos flower

again, because they may rely upon floral characteristics

However, with the arrival of

the new techniques of identification

such as DNA sequencing,

some progress has been achieved

Based on the results of the

for bamboos was developed

by The Grass Phylogeny

to this classification, the

(about 100 species) are characteristic of tropical rain forest

understoreys and require a separate review.

The highest diversity of woody bamboos has been

recorded in the Asia-Pacific region, with the largest

national complement of species in China (more than

(Ohrnberger 1999). The lowest diversity of woody

bamboos is found in continental Africa, where five

with its 33 species of woody bamboos, 32 of which are

and other continents, may relate to past climatic

variation on the continent, although the precise reasons

for it are not known. The Americas are collectively

much richer in bamboo species than either continental

Africa or Madagascar, but have lower diversity than

the Asia-Pacific region. There are approximately 430

species of New World woody bamboos, of which more

than 40 % belong to a single genus, Chusquea

In many forest ecosystems bamboos play a major role

in ecosystem dynamics. Most bamboo species have

die-off that may have evolved as an adaptation to forest

in bamboos after fruiting generates a widespread and

both increases opportunity for seedling recruitment and

resets the successional cycle to favour persistence of

the new clones. The dense and rapid growth of woody

bamboos may suppress the regeneration of other woody

species (Clark 1995). This may explain how woody

can occur in almost homogeneous stands in some

dominated by Guadua angustifolia – is an important

areas in the Amazon region occupy between

is currently a PhD.

student. Her research is

on the biodiversity and

she worked with Valerie

Kapos on a project

for Bamboo and Rattan

WCMC to estimate the

in Latin America and

including the effects of

she has been working

practice through the use

Numbers of species of

countries of the Asia-

Arthrostylidium, is often impenetrable because of the

thorns of the bamboo. In some areas, woody bamboos

in abandoned cultivation, excluding the regeneration of

associated with explosive increases in population

abundance or density of rodents, or so-called “ratadas”

and increase in diseases in local population. In India,

the most recent plague of rats that followed mass

flowering of the local bamboo Melocanna

bambusoides, triggered a civil unrest in the northeastern

While some take advantage of the irregular bamboo

mast seeding events, many forest animals depend on

bamboo in their day-by-day life. Many of these are of

conservation concern and considered by IUCN to be

fulgens) are totally dependent on a few species of

For the 650 or so “Endangered” Mountain Gorillas

in Central Africa, bamboo shoots can make up as much

as 90 % of their diet. The Eastern or Mountain Bongo

Mountains in Kenya is one of the world’s most

endangered mammals, with fewer than 100 individuals

remaining in the wild. This large forest antelope spends

the wet season in cloud forests lower down the

mountains, but migrates to spend the dry season in the

In Madagascar, all three recognized species of bamboo

are classed by IUCN as “Critically endangered”)

heavily depend on bamboo, various parts of which make

up a large part of their diet. The bamboo forests in the

drier western part of Madagascar are the habitat of

one of the most endangered reptiles in the world, the

In South America, especially at higher altitudes and in

opportunistically on young shoots of bamboo.

eat considerable amounts of bamboo in their highaltitude

associated with bamboo, 11 are of conservation concern

A number of less charismatic animals also depend on

bamboo. Some use bamboo for shelter or escape from

potential predators, some for reproduction. One of the

nodes of mature bamboo, which it enters through holes

created by beetles. A species of poison frog (Mantella

reduced by development, drainage and suppression of the

fire regime that was important to their maintenance, still

provide shelter for at least five species of butterfly, which

require the cane as food during the caterpillar stage.

Throughout the world, people have fashioned more than

a thousand different products from bamboo stems and

of bamboo are estimated to be worth US $ 4.5 billion per

year. Global export of bamboo generates another US $

Bamboo culture is deeply rooted in the life of people in

needs of a rural community, providing strong stems for

building houses and bridges, as well as furniture, water

plants have been a source of inspiration for poetry, art

and philosophy. Today, bamboos are growing in

techniques transform bamboo into flooring and board

a substitute for wood in pulp and paper manufacturing.

its traditional bamboo culture, is also the world’s most

In Africa, although there is little cultivation of bamboo

and little or no international trade in bamboo, many

bamboo products are used domestically and can be very

significant in both household and local economies. Key

basketry and toothpicks. In some parts of Africa, bamboo

is also a source of food and drink. In Tanzania and

abyssinica are consumed as food. The principal use of

this species in Tanzania, however, is in the production

of bamboo wine, also known as ulanzi. Tips of young

shoots are cut off and the stem portion bruised every

morning and evening for about a week. The exudates

from the bruises is collected and allowed to stand for

two days to ferment. The resulting ulanzi, 5-5.5 per cent

alcohol, is one of the principal forms of alcohol

consumed in some areas.

Bamboos are a source of food both for humans and

for livestock in the Americas, though to a much lesser

extent than in Asia or Africa. Indigenous Peoples eat

the fruits and seeds of several species, and some use

of bamboo shoots as food has been reported. Woody

bamboos are also used to make handicrafts and

furniture and agricultural supports are all made from

bamboo of different types. Bamboo has a long history

of use in construction in Central and South America,

where it is a common part of the vernacular

architecture. In southern Colombia and northern

been extensively used in houses that have stood for

50-100 years on unstable sites such as steep slopes,

that are frequently inundated. More than 100,000 ha

of Bambusa vulgaris introduced from Asia are

cultivated for paper production in Brazil, which is the

only New World country to use bamboo for making

So far, between 50 and 100 woody bamboo species are

exploited by major industries and have been domesticated

into plantations. Actively cultivated locally for

millennia, these species are in a relatively secure

position, at least in terms of their genetic diversity. Of

much greater concern in terms of erosion of their

genetic diversity are the remaining forest bamboos, of

which many are highly susceptible to deforestation. With

per year) in tropical Africa and 0.4% (nearly 4 million

bamboos are potentially threatened if they depend on

forest habitat for their survival. According to the results

of the world’s woody bamboo species may be vulnerable

to extinction as a result of massive forest destruction.

Some 250 woody bamboo species have less

remaining within their ranges.

Although some bamboos have been the subject of a

great deal of research, the majority of species are

poorly known and much of their biology is incompletely

understood. Most international research funding and

effort has focused on a relatively small set of 38

“priority species” of bamboo that are commercially

important and widely distributed. Of these, most are

native to the Asia-Pacific region, one is and African

species and one comes from South America (Rao et

The vulnerability of some species is increased by the

populations in cycles of 20-120 years. If a single

conditions such as high grazing or fires, the entire

A & B. Bamboo bridge

bamboo seed is produced infrequently and can in many

cases be stored for only a few years (Stapleton and

Rao 1996), in situ conservation efforts are needed to

complement the current emphasis on conservation

At present, official conservation assessments of

bamboos contrast markedly with the results of the

Asian and one African species (Gillet and Walter

probably have less than 20,000 km 2 of forest remaining

within their ranges and as many as ten species have

by IUCN as a plant species of global conservation

Significant effort is still required to assemble an accurate

information base as a foundation for policy and management

decisions affecting bamboo and to ensure the survival of

their full biological diversity. A programme to strengthen the

one that prioritizes the assessment of species with the smallest

on people and environment in Northeast India – strategies to deal with

and conservation status of forest bamboo biodiversity in the Asia-Pacific

in the Asia-Pacific region. UNEP-WCMC/INBAR.

Madagascar and the Americas. UNEP-WCMC/INBAR.

Clark, L.G. 1995. Diversity and distribution of the Andean woody bamboos

conservation of Neotropical montane forests. Proceedings of the

classification of the grasses (Poaceae). Annals of Missouri Botanical

Haemig, P.D. 2003. Birds and mammals associated with bamboo in the

INBAR. 1999. Socio-economic issues and constraints in the bamboo and

Nelson, B.W. 1994. Natural forest disturbance and change in the Brazilian

Ohrnberger, D. 1999. The Bamboos of the World: Annotated nomenclature

and literature of the species and the higher and lower taxa. Elsevier,

diversity studies on bamboo and its conservation. Proceedings of the