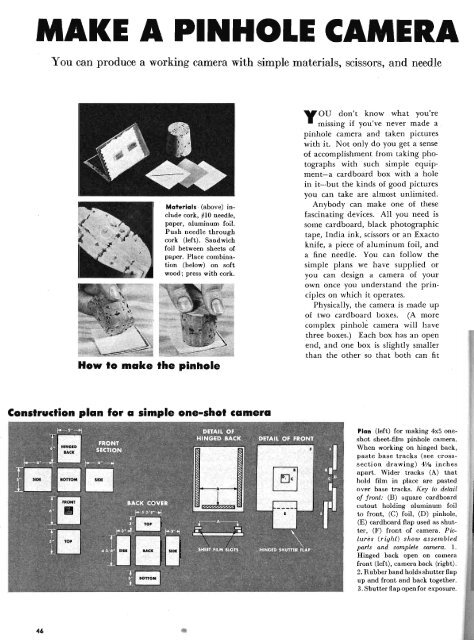 You can produce a working camera with simple materials~

foil between sheets of

How to make the pinhole

you don't know what you're

missing if you've never made a

with it. Not only do you get a sense

of accomplishment from taking photographs

cardboard box with a hole

in it-but the kinds of good pictures

you can take are almost unlimited.

Anybody can make one of these

fascinating devices. All you need is

knife, a piece of aluminum foil, and

simple plans we have supplied or

you can design a camera of your

own once you understand the principles

on which it operates.

Physically, the camera is made up

of two cardboard boxes. (A more

complex pinhole camera will have

three boxes.) Each box has an open

end, and one box is slightly smaller

than the other so that both can fit

When working on hinged back,

apart. Wider tracks (A) that

hold film in place are pasted

over base tracks. Key to detail

of front: (B) square cardboard

Hinged back open on camera

up and front and back together.

You c:an make either a wide-angle or telephoto pinhole camera. Area covered depends on film-to-pinhole distance. Both pictures were

together forming a light-tight unit.

The front, smaller box, has a small

hole in it which acts as the lens. A

piece of film is placed inside the

back of the rear box either by using

How does the pinhole act as a

so small that it admits only one ray

of light from any given point on

objects in front of the camera. Light

rays enter the pinhole from all

points and form an image on the inside

of the camera. The sharpness

of the image depends on the size of

the hole. The smaller the hole

(aperture), the sharper the image.

simple one-shot, and the sheetfilm-type

camera, and second, how to

(If you own a press-type camera

and don't want to go to the trouble

of making the box, you can turn this

camera into a pinhole type by substituting

for the lens a piece of

aluminum foil with a pinhole in it.

The foil can be fastened over the

opening on the front standard of the

tape to insure against light leaks.)

A plan for the simple one-shot

this camera only one picture can be

taken during a shooting session. The

camera must go into the darkroom

reload before making another shot.

The hinged back allows for easy

Once you have cut out the pieces

of cardboard, blackened them on

the inside with diluted India ink,

and assembled them into box form,

you are (Continued on page go)

How to build a pinhole camera for use with film packs

back allows photographer to shoot

more than one negative during a

session without running to darkroom.

into back (illustrated opposite

page). Front fits over these boxes.

wlits together. Pinhole is made

as illustrated on page 46 and

taped inside the front box.

pictures you can make

placed within 18 inches of subject.

Type B film was forced in DK-50

Outdoor portrait was made with

a 16-second exposure. The

Still life was made with two

ready to make your "lens." The pinhole

itself is made in a small square piece of

aluminum foil, the kind used around

illustrations.) Place the aluminum foil between

and then put this "sandwich" on a soft

wood support. A drawing board is good.

needle through the combination. This will

(The needle can be pushed through a

cork first so that you don't accidentally

make a bigger hole than you need when

pressing down on the paper and foil.)

from between the papers and tape it

over the opening in the cardboard on

the front end of your pinhole camera.

A heavy rubber band can be used to

keep the front and back sections of the

or unloading must be done under darkness

A step beyond the simple one-shot

pinhole camera is the film-pack pinhole.

Extra effort is required to make this

unit, but it pays off. The photographer

with a sheet-film-pack pinhole has 12

times the shooting power of his fellow

photographer who has a single-shot camera.

be made of a scene with only the pull of

the black tabs in the pack. (Plans for

Extreme care must be taken when

working on the film-pack back of the

camera. If you use the plans given here,

a piece of heavy black velvet should be

attached to the outer, front side of the

back slot in the pack. The cloth will

make the back light-tight.

A few "do's" to remember while working

on either of the cameras: paint the

inside surfaces of your camera with diluted

rays are not reflected inside the camera.

Check the edges and corners of the

with pieces of black photographic tape.

Cut pieces for the camera with great

care so parts will fit together well.

Here's what makes a picture:

use a fast panchromatic film in order to

be able to give shorter exposures. Color

pictures can be made also with pinhole

cameras. In color work, only tests will

give you an idea of how to expose properly,

and what filters to use.

EXPOSURE: For a pinhole camera

needle, and placed 5 inches from a fast

shots, varying the time on each.

Develop normally and choose the best

negative for a standard of exposure.)

use two #2 photo-flood lamps, one on

each side of the subject, pointed at it

from 3 feet away. Expose 1 minute.

PROCESSING: It is best to develop

film by inspection. However, the above

exposure guides are based on development

in Kodak Dektol, diluted one part

4 min at 68-degrees F with agitation.

VIEWFINDER: The most common way

of judging what areas will be included

in a picture made by a pinhole camera

is to sight from the center, back part of

the camera, at eye level, using the front

corners of the camera to designate the

right and left hand limits of the picture.

By holding your hand about 4 or 5

inches above the front section (this depends

on whether you're taking a

vertical or horizontal picture with your

4x5 camera), you can get an approximate

idea of your coverage.

FOCUSING: Since the "lens" opening

is somewhere within a few points on

either side of f/200, you need not worry

about focusing. Your picture will be as

sharp in foreground as background.

on the distance of the film from the pinhole.

If the pinhole is 3 inches from a

4x5 piece of film it will produce a wideangle

effect. Using the sam~ film, but

moving the .pinhole 5 inches away, you

will get a view that could be classified

as "normal." Using the pinhole beyond

the normal focal length for 4x5 film will

start producing a telephoto effect. You

must remember that as you increase the

focal length of your pinhole camera, that

you are increasing the time of exposure

also. If on a pinhole camera with a

5-inch focal length the exposure in

bright sunlight is 16 seconds, the exposure

for a pinhole camera 10 inches

long will be slightly more than 4 times,

or about 70 seconds. For extra long pinhole

cameras it is best to run exposure

SHUTTER: Since most pinhole exposures

are long, a cardboard piece

hinged over the front of the pinhole

camera can act as a shutter. It is operated

manually. With flash, electronic or

flash bulbs, the duration of the light acts

as the shutter. The open-flash system is

used when working with flash. Open the

<strong>MAKE</strong> A <strong>PINHOLE</strong> <strong>CAMERA</strong> You can produce a working camera with simple materials~ scissors, and needle Materials (above) include cork, #10 needle, paper, aluminum foil. Push needle through cork (left). Sandwich foil between sheets of paper. Place combination (below) on soft wood; press with cork. How to make the pinhole you don't know what you're missing if you've never made a pinhole camera and taken pictures with it. Not only do you get a sense of accomplishment from taking photographs with such simple equipment-a cardboard box with a hole in it-but the kinds of good pictures you can take are almost unlimited. Anybody can make one of these fascinating devices. All you need is some cardboard, black photographic tape, India ink, scissors or an Exacto knife, a piece of aluminum foil, and a fine needle. You can follow the simple plans we have supplied or you can design a camera of your own once you understand the principles on which it operates. Physically, the camera is made up of two cardboard boxes. (A more complex pinhole camera will have three boxes.) Each box has an open end, and one box is slightly smaller than the other so that both can fit Construction plan for a simple one-shot camera Plan (left) for making 4x5 oneshot sheet-film pinhole camera. When working on hinged back, paste base tracks (see crosssection drawing) 41;\6 inches apart. Wider tracks (A) that hold film in place are pasted over base tracks. Key to detail of front: (B) square cardboard cutout holding almninum foil to front, (C) foil, (D) pinhole, (E) cardboard flap used as shutter, (F) front of camera. Pictures (right) show assembled parts and complete camera. 1. Hinged back open on camera front (left), camerl). back (right). 2. Rubber band holds shutterflap up and front and back together. 3. Shutter flap openfor exposure. 46 ...