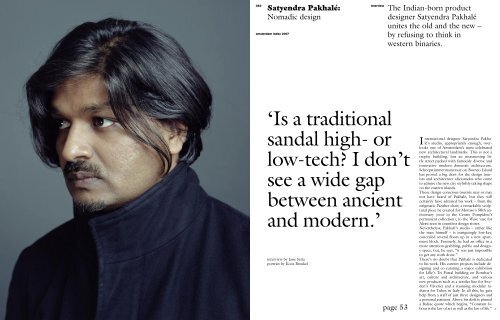 'Is a traditional sandal high- or low-tech? I don't see a wide gap ...

'Is a traditional sandal high- or low-tech? I don't see a wide gap ...

unites the old and the new –

by refusing to think in

one of Amsterdam’s most celebrated

new architectural landmarks. This is not a

trophy building, but an unassuming little

street packed with famously diverse and

has proved a big draw for the design tourists

and architecture aficionados who come

on the eastern islands.

Those design-conscious tourists may or may

not have heard of Pakhalé, but they will

certainly have admired his work – from the

(now in the Centre Pompidou’s

permanent collection), to the Wave vase for

the man himself – is intriguingly low-key,

concealed several floors up in a new apartment

block. Formerly, he had an office in a

space, but, he says, “it was just impossible

to get any work done.”

There’s no doubt that Pakhalé is dedicated

to his work. His current projects include designing

and co-curating a major exhibition

art, culture and architecture, and various

new products such as a textiles line for Sweden’s

Väveriet and a stunning modular radiator

for Tubes in Italy. In all this, he gets

help from a staff of just three designers and

a personal assistant. Above his desk is pinned

the same; there’s no

is the fault of design.’

As Pakhalé puts it himself, “Design is not a

profession, but a way of life.” He now spends

much of his time travelling to stay inspired

and informed and to visit clients around

Europe (only one, Cor Unum, is Dutch).

That leaves him little time to daydream over

the evocative view from his office window

– the old dockland landscape that for centuries

connected Amsterdam with the world

and all it had to offer in terms of trade. The

docks were, perhaps, the original multicultural

melting pot, and the Indian-born international

From Frog to Panther ~ It’s all a long way

from the small town in central India where

Pakhalé was born. His family were neither

craftsmen nor designers, but they encouraged

him in his early love of making things.

“What I do now is not so different from

what I was doing when I was a kid,” he says.

“It’s about simplifying situations, although

not in a simplistic way.”

to now – whose results are clear in the

playful yet ruthlessly economical forms of

Fish chair for Cappellini – emerged only after

a struggle to escape an earlier life as a hightech

designer during the dot-com boom.

Following an industrial training (IIT in

of Design), Pakhalé joined Frog, the

design company famous for its work with

Apple. He then turned down a number of

(even then, he was wary of its technological

monoculture) in favour of Dutch giant

Philips. There, he created the interior of

other now-familiar elements that didn’t exist

“I think we achieved a beautiful integration

of technology with the environment,” says

Pakhalé, who is equally proud of the interior’s

Although Philips was “an interesting playground,”

with what he saw as the soulless nature of

technology design. “In the high-tech world,

people talk as if there was no life before the

mobile phone,” he says. “Technology is

used in such a linear, fanatical way, it doesn’t

actually make life any better. All those plastic

This isn’t the fault of technology but

So, inspired to “understand creativity for creativity’s

his own studio in Amsterdam, and spent

months in India exploring handicrafts. “It

wasn’t about rejecting the modern world,”

he says, “but about getting back to basics. I

was looking for something universal – something

with local roots but that would appeal

Miyake, which is intrinsically Japanese and

yet has this universal appeal.”

He began devoting lots of time to making

things by various means, even weaving himself

a scarf. “This allowed me to explore the

is on a one-way track. Just because

we use machines to make things, why should

that limit us to the same old straight lines,

the same old materials? I didn’t want to do

craft for its own sake, out of some kind of

nostalgia, however; I was seeking the human

quality of design so I could incorporate

it into my industrial design.”

Back in Amsterdam, Pakhalé applied his

newfound principles to a commission from

speaking, his Panther seems altogether too

complex an object to be called a chair, despite

its breathtaking simplicity of line. It

and lounging in a variety of postures.

doesn’t have to ask. Children immediately

almost seems to resist categorisation as an

inanimate object. In name and form, it has

a zoomorphic reference: what Pakhalé calls

a totemic quality. “In industrial culture, we

anything anymore,” he explains. “I am trying

to bring this back, almost in the form

of an algebraic language. That doesn’t mean

using animal symbols and so on in a representational

way, but in an abstracted way. I

want to convey the essence of form.”

Beyond high- and low-tech ~ Despite its

work, has a sculptural quality that demonstrates

a sophisticated preoccupation with

engineering and technique. It’s as though

he takes a low-tech formulaic language

recognisable from children’s drawings and

tribal art and embodies it in a high-tech

manner, through process, materials or

both. But the designer fi nds such polarity

reductive: “Is a traditional leather sandal

high-tech or low-tech?” he asks. “I really

don’t know. I don’t see such a wide gap between

ancient and modern. In India I grew

up among ancient things that actually look

bell metal and ceramics, for example – and

industrialises them. “I don’t just want to

make one-offs, things with my thumbprints

on,” he insists. He used the bell-metal technique,

in which wax is coiled around clay

to create a spiral form for metal casting, to

to translate the process into stereolithography

for his STL vase and hanger – lasermade

equivalents of the original handcraft

technique. Another evolution of the series

came with his stainless-steel Wave vases for

Alessi, whose rippled surfaces magnify the

original spirals in a process of great technical

the manipulation of water jets, heating,

and hand bending. “This is craft, complete

with all the modern technology,” says

Pakhalé. “No software can do this.” The designer,

who admits to spending six months

on a prototype, is aghast that others don’t

bother with models. For him, they’re “the

The experimental process, it seems, is never

over for Pakhalé: the BM Horse has appeared

resin, and Corian, as well as with a flocked

surface, and he’s working on a ‘sliced’ version

Because ceramics are not associated

in a factory near Venice and joined using a

glue developed in the aerospace industry,

the Flower Offering Chair is a purely totemic

object, he says – a means of expression,

Given that he spends large chunks of his

and the US, why live in Amsterdam? Logistically,

of course, it’s ideally positioned to

Pakhalé, “Amsterdam is a city where human

values and the human scale are very well

expressed. You can walk anywhere.” And it

seems he does; he doesn’t own a car – in the

nomad slips easily between modern and

and craft, high and low tech. And Amsterdam

has always been a place where different

cultures seem to coexist, in layers that barely

touch. Which must be why Pakhalé clearly

Opposite page, from top:

‘I was looking for something with local roots 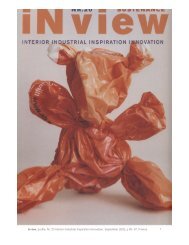 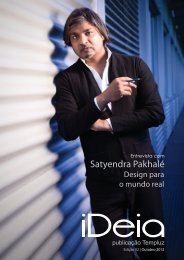 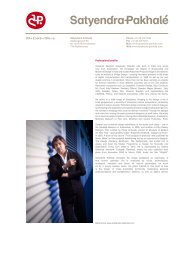 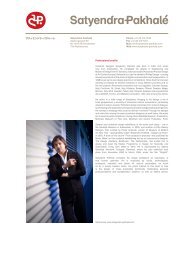 Magazine: 'Is a traditional sandal high- or low-tech? I don't see a wide gap ...