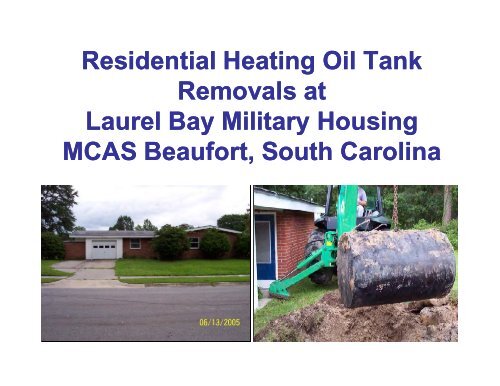 ‣ LBMH was originally built in the mid 1950s. It is

approximately 1100 acres and consists mostly of

‣ It is bordered on the west by tidally influenced

salt marshes and the Broad River and on the

home depending on the design.

‣ Tanks were installed with a concrete pad on top that can

be as much as 12 inches thick.

‣ Tanks were last used in the early 1980s when heating

for the homes was switched to natural gas. Heating for

the homes have since been changed over to geothermal.

‣ After the switch to natural gas a project was completed

in the mid-1980s that abandoned the tanks by pumping

out the tanks and filling with sand.

‣ Over the years tanks were encountered during utility

work. These tanks were typically removed and soil

‣ In the early 2000s a Public Private Venture (PPV)

managing partner took over base housing and, as part of

the contract, was responsible for removing tanks that

interfered with housing demolition and renovation

‣ PPV partner removed tanks from 6 houses and, because

project than an environmental project, a work plan was

developed for tank removals by NAVFAC SE and MCAS

Beaufort that was agreed to by State regulators and PPV

‣ As tanks were removed it was discovered that some

‣ One tank was typically filled with sand but the other

tanks were either empty or contained water/water fuel

‣ Also discovered was that around 70% of the tank sites

‣ Because of the multiple tank situation and the high

MCAS Beaufort determined it would be best to remove

all tanks remaining after PPV partner completed their

from about 114 home sites they decided to get

out of the tank removal business.

‣ MCAS Beaufort then started to remove the

above State action levels has gone down to

‣ Slightly more to it due to occupied homes

‣ Prior to 2009 nearly all tanks were

removed from homes that were

unoccupied because of demolition or

‣ Renovations resulted in some tanks

located partially or wholly beneath

‣ In addition, there are sewer lines in front

yards but no one knows where.

‣ At occupied homes the removal process is

‣ Tank work can only be done between

‣ Residents must be notified prior to tank

‣ Excavations cannot be left open due to

residential nature of the area.

‣ Although we have original plans showing tanks

locations, a magnetometer and push probe are used

to verify tank location since some tanks are not

located where plans show them.

‣ After the tank(s) are located flower beds are

deconstructed or sod is removed.

‣ At the start of removal excavator carefully scrapes

away soil to look for sewer/irrigation lines.

‣ If sewer/irrigation line is found, it is cut and capped.

‣ Excavation then proceeds to the top of the concrete

or top of the tank.

‣ If concrete is present it is removed as one piece

‣ After the tank is exposed, if it is full of sand it is

removed, wrapped in plastic, and taken to a

‣ If tank has not been abandoned, any fluid is

pumped out and properly disposed, tank is

removed, wrapped in plastic, and taken to a lay

down area to be cleaned and delivered to a

‣ After tank removal, a soil sample is collected from

beneath the fill end and analyzed for

‣ Excavated soil is returned to the hole and additional

fill is placed in the excavation up to ground level.

and flower beds/lawns are reconstructed.

‣ After soil sampling results are received a report is

Assessment form and is submitted to the SCDHEC.

‣ For those sites where no soil contamination is detected

or is below State action levels for UST petroleum sites, a

“no further action” determination is warranted for the site.

exceeds action levels, the State will typically require an

Initial Ground Water Assessment (IGA) that calls for the

installation of a permanent well. Heating Oil USTs are

not regulated, so the IGA is used as a guideline for

further investigations. For Laurel Bay, because the work

is conducted at occupied homes, a temporary well is

installed to minimize disturbance to residents.

‣ SCDHEC’s IGA form is used to report the sampling

‣ As with the soil samples, if the ground water results are

below detection limits or action levels then a “no further

‣ If the ground water results are above action levels then

corrective actions are then implemented for the site.

‣ At this time all Marine Corps funding received for heating

the tanks since the most important aspect of this work is

tank removal. The Navy is expected to take over funding

for follow-up corrective actions in FY12 under the

‣ Keep the residents happy. Let them know what

your going to do and when you will be at their

have underground utilities that no one knows

about or where they are located.

‣ Make sure you have the State on board with

‣ Make sure PPV partner is aware of their

responsibilities with regard to heating oil tanks. 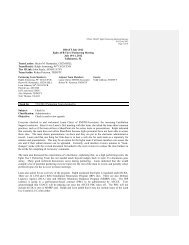 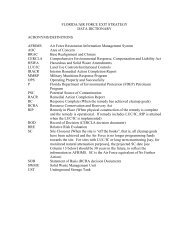 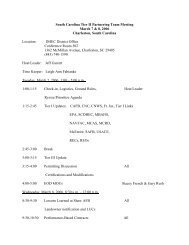 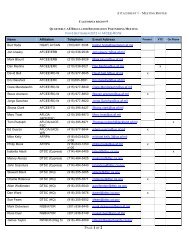 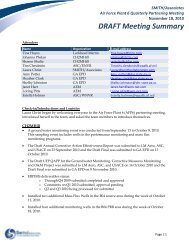 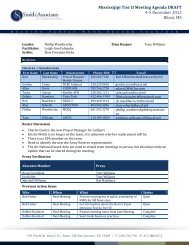 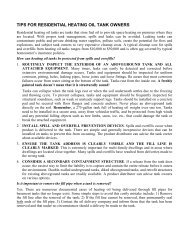 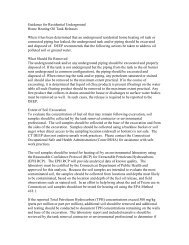