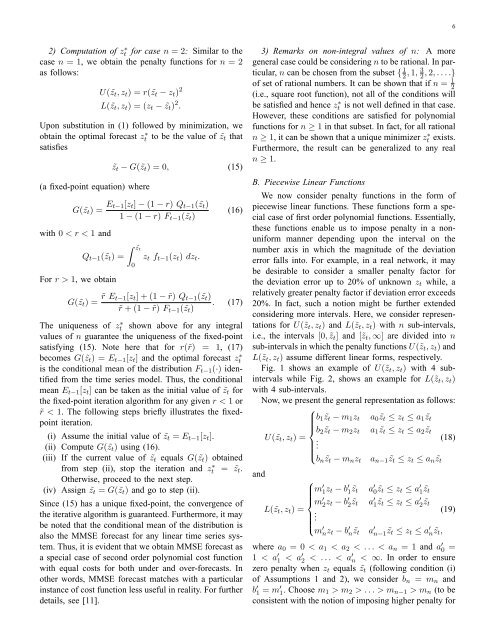 Upon substitution in (1) followed by minimization, we

(a fixed-point equation) where

The uniqueness of zt

∗ shown above for any integral

values of n guarantee the uniqueness of the fixed-point

is the conditional mean of the distribution F t−1 (·) identified

from the time series model. Thus, the conditional

the fixed-point iteration algorithm for any given r < 1 or

Otherwise, proceed to the next step.

Since (15) has a unique fixed-point, the convergence of

the iterative algorithm is guaranteed. Furthermore, it may

be noted that the conditional mean of the distribution is

also the MMSE forecast for any linear time series system.

Thus, it is evident that we obtain MMSE forecast as

with equal costs for both under and over-forecasts. In

other words, MMSE forecast matches with a particular

instance of cost function less useful in reality. For further

3) Remarks on non-integral values of n: A more

general case could be considering n to be rational. In particular,

(i.e., square root function), not all of the conditions will

be satisfied and hence zt ∗ is not well defined in that case.

However, these conditions are satisfied for polynomial

functions for n ≥ 1 in that subset. In fact, for all rational

n ≥ 1, it can be shown that a unique minimizer zt ∗ exists.

Furthermore, the result can be generalized to any real

We now consider penalty functions in the form of

these functions enable us to impose penalty in a nonuniform

manner depending upon the interval on the

number axis in which the magnitude of the deviation

error falls into. For example, in a real network, it may

be desirable to consider a smaller penalty factor for

the deviation error up to 20% of unknown z t while, a

20%. In fact, such a notion might be further extended

sub-intervals in which the penalty functions U(˜z t , z t ) and

Now, we present the general representation as follows:

consistent with the notion of imposing higher penalty for