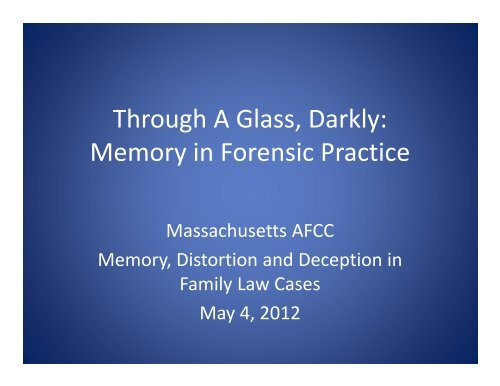 Through A Glass, Darkly: Memory in Forensic Practice - MA AFCC

Through A Glass, Darkly: Memory in Forensic Practice - MA AFCC

Through A Glass, Darkly:

Memory, Distortion and Deception in

Through A Glass, Darkly

when I became a man, I put away childish

For now we see through a glass, darkly, but then

face to face: now, I know in part, but then shall I

know even as also I am known.

From: First Epistle of Paul the Apostle to the Corinthians, 13

Through A Glass, Darkly

• Traditionally, interpreted as peering through a

clouded window pane or looking glass, with a

focus upon the distortion of what was

• But, at time of the Saint James Bible, “glass”

was a term for a mirror—which were made

like ours with a glass with a sliver coating.

polished brass but with a weak and distorting

• “Although the rules of evidence govern the

cases, as reflected in reported opinions and informal

surveys of experts, child custody cases have been

threshold scrutiny of expert testimony that has

transformed other legal arenas such as toxic tort and

products liability litigation….It is striking that one of the

most important categories of cases, the future of our

children, has ignored the call for trial judges to address

threshold scrutiny of the reliability and relevance of

B has been involved as a GAL in divorce child

custody cases for almost 20 years and is very

well regarded. B receives a phone call from C,

an attorney with which B has often interacted in

such cases although B’s practice is almost always

to only be involved in divorce child custody as a

court‐appointed GAL. C says that “I am looking

for someone to propose to the Court for a GAL

case and thought you might be helpful in this

case and I know you are respected by the other

attorney. Frankly, I am not certain why it has

gotten to the point where the case needs a GAL.

My client has been pretty reasonable but the

client for the other side has been rigid and has

made some dubious but serious allegations

against my client. Obviously, you will have to

come to your own conclusions but I would like

to put your name to the other attorney and the

interested and agrees to be proposed as a GAL

B later hears that the Court has ordered the GAL appointment. B

Attorney D’s (P2) client. B learns that P2 is a veteran with a

Lists of potential collateral contacts are devised with P1 and P2

respectively. B starts to contact collaterals with a broad inquiry

regarding parenting functioning and potentials for co‐parenting

Before that process can be completed, allegations of

sexual impropriety with their two year old child are

allegations are that the child has suddenly become

anxious, have difficulty with sleep, and engage in

especially around periods of visitation with P2.

In the course of the evaluation, B reviews past

outpatient assessment of the child arranged by

P1 after becoming concerned about the

and P2, later noting with interest that the new

since a psych testing of P2 three years ago.

As a result of the complexity of the case and the

completion of DCF investigation, and document

arising from evaluator vulnerabilities or

characteristics of sources of information?

• The demands of the clinical or other judgments

to be made fall beneath the level of skill of the

clinical decision‐maker. The decisions to be

made are actually easy ones.

• If clinicians were diligent in checking for errors

and/or the practice environment offered

prompt and reliable feedback about the

reliability of decisions made

safeguards to minimize the impact of error so

that when errors occur incentives to attribute

the source of errors to others or to factors

outside of decision‐maker control are

– Tendency to increase confidence in the absence of

– Limitations in the ability to reliably identify, process,

there is a lot of information and/or when

information is complex or contradictory

– Over‐attribution to own skills events that occur

randomly, would have occurred anyway, or are selflimiting

• Problem 2: In reality, clinicians do not diligently

seek out evidence of error or misjudgment

(especially when it is not brought to their

– Uncritical regard for skills and competencies

– Unawareness of failures, esp. subtle ones

impact of error (so that when errors occur

incentives to assign the source of errors to

others or to factors outside of decision‐maker

– Often impractical to look for errors

– Furtherance of decisions based upon prior errors of

– Unawareness of own limits of skill, judgment

Error In Professional Judgment or Decision‐making

• Implicit over‐confidence in own judgments

• Over‐attribution to self of (+) random events

• Decisions about how far to rely upon preceding

or collateral sources of information or judgment

• Inaccuracy from Overreliance on Memory

– Decreases in information relied upon

– Distortions in information relied upon

– Introduction of sources of judgment bias

• Errors in estimates of co‐variation of factors

• Note: Borum, et al call for electronic recording of all

• Inaccuracy from Underutilization of Base Rates

is a function of correct “assignment” of the target

and the prevalence in the population where tool is

being utilized or judgment is being made

– Without utilization of a base rate, risk of errors of

– Tendency to pursue information that supports

perspective/hypothesis and to fail to seek, or to

ignore, potentially disconfirming information or to

• Operation of “anchoring” or “primacy” effect

– Tendency to persist with early perceptions or

impressions even in the face of subsequent

contradictory information—easier to create a first

impression than to modify it later

• Errors in estimating co‐variation (the likelihood

that two or more variables are related), such as

the likelihood of a cluster of signs/symptoms are

related in an individual case to child sexual abuse

or exposure to domestic violence

– A: Both signs and target (dx, condition) are present

– B: Signs are present but target is not present

– C: Signs are not present but the target is present

– D: Neither signs nor the target are present

• Problems with assessing co‐variation include:

– Tendency to base conclusions on co‐variation on

selective recall of Box A with inadequate or no

recollection , recognition or systematic analysis of

potential for Boxes B, C, D.

– Both of these often the basis of “received clinical lore

or wisdom” perpetuated in clinical decision‐making

but ultimately demonstrated as erroneous.

– Bias arising from post‐event estimate of the

probability of the outcome of that event WHEN the

bias—failure to pursue disconfirming information or

• Over‐Reliance on Unique Data—the tendency to

give undue attention to case factors that are

– Risk that unique data will be have differential salience

and/or given undue weight in judgments

– Risk that presence of unique data with serve to

distract from more familiar and reliable methods of

– Specific articulation of confidence level of info relied upon

– Specific articulation of basis for attribution and active

• Active inquiry as to base rates and mindful

incorporation when available. Use of relevant

• Active inquiry when faced with “co‐variation”

decisions and articulation of potential relationships

among data‐points prior to drawing inferences

• There is no research indicating that mental health

professionals are particularly adept at detecting

• Research on detecting deception suggests it is very

– Most “common beliefs” about signs or lying are

– Problem of the “honest liar” who believes the

inaccurate information at the time or subsequently

MHPs better but still modest and with wide range

• Some approaches show promise but lie in the area

of “interrogation” rather than “interview” and

– “Level of detail” interrogation techniques that push for

– Withholding verified information until a detailed

narrative is elicited from the subject

– Increasing “cognitive load” on the subject by eliciting a

detailed narrative and then asking for reporting of the

events of the narrative in reverse order

• In any event, implicit or explicit decisions

regarding deception by a subject or the credibility

of a subject are vulnerable to operating

heuristics, biasing processes, reaching beyond the

of the legal finder of fact either overtly or

The Future of Deception Detection?

The Forensic Application of “Brain

Fingerprinting:” Why Scientists Should

Encourage the Use of P300 Memory

“This use of court‐appointed mental health experts in family

law cases without threshold scrutiny of their methods and

procedures has transformed the authority of experts and

their role in custody cases….Subtly, without fanfare or

hoopla, the role of mental health professionals in custody

litigation is being transformed from expert as expert to expert

as judge…..Court’s failure to grapple with the scientific

critique of the methods and procedures mental health

practitioners utilize in child custody evaluations and to

discriminate against irrelevant and unreliable expert

testimony are powerful evidence that the have not given

serious consideration to whether this evidence qualitatively

three; but the greatest of these is charity.

Psychology as One More Basic Science.

of Experience on Judgment Accuracy. The

judgment and decision making in forensic

evaluation" Journal of Psychiatry and Law 21 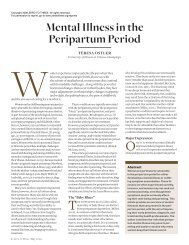 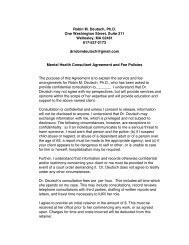 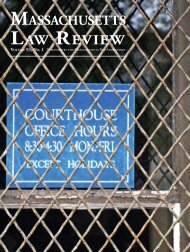 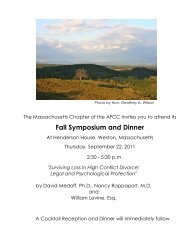 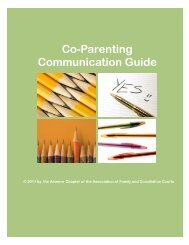 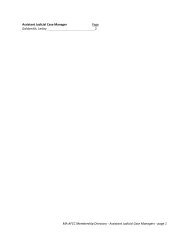 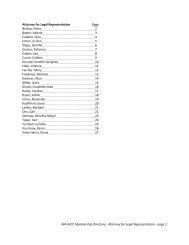 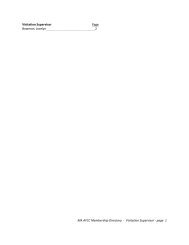 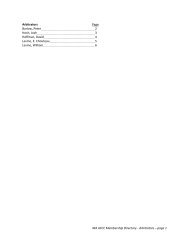 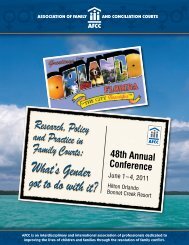 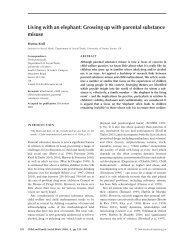 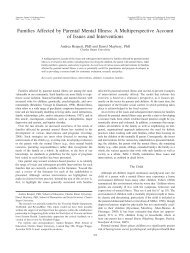 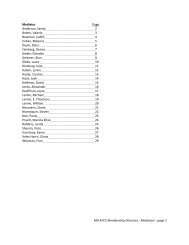 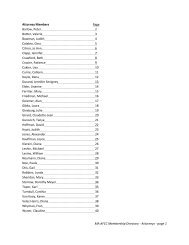 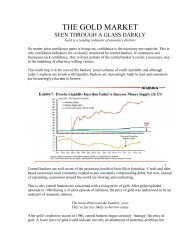 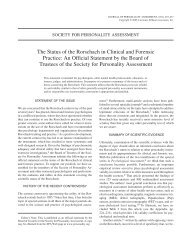