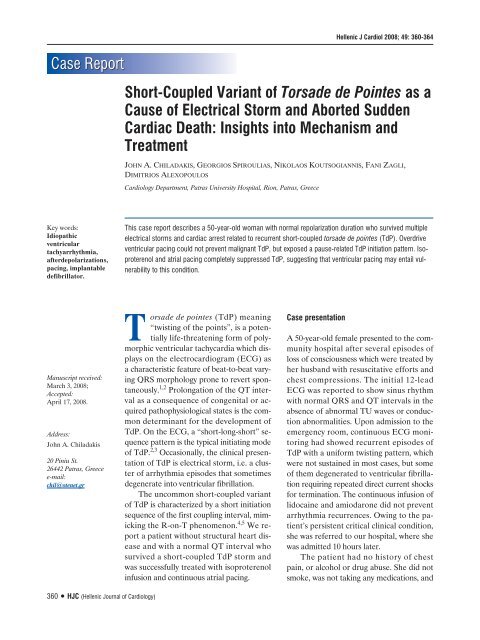 Short-Coupled Variant of Torsade de Pointes as a

Cause of Electrical Storm and Aborted Sudden

Cardiac Death: Insights into Mechanism and

“twisting of the points”, is a potentially

on the electrocardiogram (ECG) as

a characteristic feature of beat-to-beat varying

1,2 Prolongation of the QT interval

as a consequence of congenital or acquired

pathophysiological states is the common

determinant for the development of

TdP. On the ECG, a “short-long-short” sequence

pattern is the typical initiating mode

of TdP. 2,3 Occasionally, the clinical presentation

of TdP is electrical storm, i.e. a cluster

of arrhythmia episodes that sometimes

of TdP is characterized by a short initiation

a patient without structural heart disease

and with a normal QT interval who

survived a short-coupled TdP storm and

was successfully treated with isoproterenol

A 50-year-old female presented to the community

hospital after several episodes of

loss of consciousness which were treated by

her husband with resuscitative efforts and

with normal QRS and QT intervals in the

abnormalities. Upon admission to the

had showed recurrent episodes of

TdP with a uniform twisting pattern, which

were not sustained in most cases, but some

of them degenerated to ventricular fibrillation

for termination. The continuous infusion of

lidocaine and amiodarone did not prevent

arrhythmia recurrences. Owing to the patient’s

she was referred to our hospital, where she

The patient had no history of chest

pain, or alcohol or drug abuse. She did not

smoke, was not taking any medications, and

did not report any family history of syncope, or premature

or sudden death. The patient had experienced her

first syncopal episode one month prior to hospital admission,

but outpatient investigation, including

echocardiography and Holter examination, was considered

our patient late in life, while she was awake, and was

unrelated to obvious emotional or physical stress or

to any other stimuli.

On her arrival at our hospital, the patient’s 12-lead

ECG showed sinus rhythm with a normal PR interval of

QTc interval was calculated to be 416 ms (heart rate 54

beats/min). In the telemetry unit the ECG showed repeated

TdP episodes. The initiating mode of TdP was initially

and was introduced by a premature ventricular beat

to the timing of U waves on the surface ECG. The two ECG channels are recorded simultaneously and continuously in both A and B,

and represent leads V5 and I. Because p waves are not well visualized in lead V5 it could be argued that there is atrioventricular conduction disturbance.

This speculation is not supported, however, by the recording of lead I, which shows sinus rhythm with always 1:1 conduction (*) and a

normal PR interval before arrhythmia. The QT interval preceding arrhythmia is normal. The coupling interval of the ventricular beat initiating

With continuous atrial pacing at 85 beats/min, the

patient is free of symptoms and has no evidence of arrhythmia

syndromes, usually occurs in the setting of identifiable

pathological conditions such as structural heart

disease or ischemia, or other precipitating iatrogenic

1,2,6,7 Despite the varying clinical presentations,

there is a major criterion which defines typical TdP,

namely the long coupling interval of the initial beat of

the arrhythmia (>600 ms). Both congenital and acquired

features, such as exaggerated TU wave changes and

manifest as pauses, or deceleration, or acceleration in

the ventricular rhythm. 3 Notable differences exist in the

methods that are effective in controlling the arrhythmia.

1 Eliminating pauses in the pause-dependent acquired

form by increasing the heart rate, such as with

isoproterenol or pacing, eliminates recurrences of the

arrhythmia. In contrast, the increase in heart rate in the

TdP. There is also an intermediate group of patients

with TdP who may exhibit features of both forms, or

episodes unrelated to exertion or excitement in the absence

TdP episodes were not associated with obvious

This constellation of clinical and electrocardiographic

findings does not fit into the common forms of the long

QT syndromes, whether congenital or acquired, or even

which was documented before TdP onset, suggesting

autonomic instability, has been acknowledged as common

in the described short-coupled variant entity of

short-coupled variant of TdP, which occurs with an

lar rhythm was regular (Figure 3B), but also following

perturbation in the ventricular cycle length by occasional

TdP may be considered analogous to the pause-dependent

TdP pattern, where the arrhythmia is accentuated

by pauses or slower pre-pause rates. Several other observations

in this case deserve attention, since they provide

added insight into the mechanisms of short-coupled

TdP. First, the QT interval during pacing was

longer (470 ms) than that of the premature atrial beat

(400 ms). It could be argued that increased dispersion

stimulation itself, 12 may increase the heterogeneity

of repolarization, which has been shown to be critical in

facilitating a re-entrant mechanism. In addition, one

could speculate that the altering repolarization sequence—i.e.

short-long cycles—might even serve to amplify

dispersion in repolarization has been shown to

13 The afterpotential hypothesis could be considered

in our patient with normal repolarization, since it

could be argued that focal activity might not be sufficient

could result in the triggering of malignant arrhythmia.

It is therefore likely that post-pause ventricular pacing

triggered activity under conditions of increased

dispersion of refractoriness. The complete suppression

of TdP by the heart rhythm increase in response to isoproterenol

and overdrive atrial pacing supports our

view that the pauses were critical for the initiation of

TdP, and on the other hand argue against an adrenergic-dependent

it could be argued that, compared to ventricular pacing,

against short-coupled TdP by limiting both dispersion

However, since permanent pacemakers

and verapamil treatment have not been proven effective

should be considered for the long-term management

of these high-risk patients with the short-coupled

and other clinical features: observations in 32 patients. J Am

mechanism of Torsade de Pointes initiation in patients with

pointes. A new electrocardiographic entity in the spectrum of

characteristics of a patient exhibiting the short-coupled variant

heart rate on afterdepolarizations in the guinea-pig heart in

cardiac death in the young: targeted evaluation of those

tachycardia as a rare manifestation of acute enteroviral myocarditis.

Magazine: Short-Coupled Variant of Torsade de Pointes as a Cause of ...